With rain in forecast, ball security at a premium as Bengals open against Steelers for first time ever. 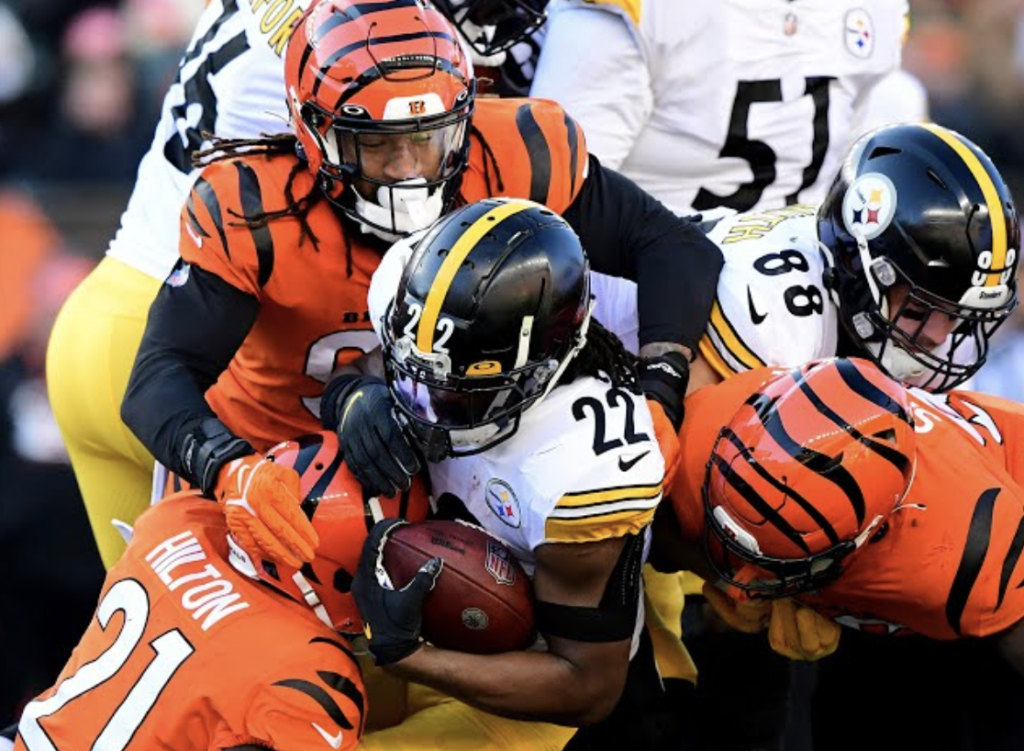 After holding out their starters for the entirety of preseason, the Cincinnati Bengals finally get to see what their new-look offensive line is capable of in game competition as they host the Pittsburgh Steelers for the first time ever in a season opener.

The forecast calls for the chance of showers and heavy rain throughout the day so taking care of the ball will be even more of a priority for both teams heading into the first game of 2022. In Thursday night’s opener between the Rams and Bills, there were seven turnovers between the two teams in a climate-controlled SoFi Stadium.

“I didn’t watch the game but I’m aware of how it played out,” Bengals coach Zac Taylor told me. “I’ve seen highlights and talked to coaches about it. That is something we stressed all week. Our guys didn’t play in the preseason, they haven’t done a lot of tackling. (We’re trying) to be prepared for that. We’ve gone over that. Can’t go over it anymore because we’ve done it so much. Now, it’s just for those guys to go out there and take care of the football.”

Beyond the weather, all eyes will be on Cincinnati’s newly constructed offensive line that features four new starters.

And with four new starters, the biggest focus will be on how well they protect Joe Burrow and how well they open holes for Joe Mixon and the run game.

With expectations as high as they are, Taylor said the focus has to be no further than the opener against Pittsburgh, a team they’ve beaten three straight times, including 41-10 in their last matchup Nov. 28 in Cincinnati.

“That’s not something we’re really getting into,” Taylor said of his team’s potential. “We knew the work that we needed to put in during training camp to prepare ourselves for the first week. I’m not looking beyond that, because we know how big Pittsburgh is Week 1 at home — and how big a divisional game is, period. It’s important to open up with great energy in front of your fans and start the season 1-0. All that we need to be focused on right now is being the best team we can be to beat Pittsburgh.”

Offensively, the Bengals boast one of the most talented passing attacks in the NFL, led by third-year QB Joe Burrow. The No. 1 overall pick in the 2020 NFL Draft, Burrow in ’21 set single-season team records for passing yardage (4611), passing TDs (34) and passer rating (108.3).

"Whatever it takes to get the wins on the field, that's success in my book." Joe Burrow #RuleTheJungle pic.twitter.com/MnG4OhA0qE

Named the league’s Comeback Player of the Year after returning from a knee injury suffered during his rookie campaign, Burrow recently had to work his way back to full health following an appendectomy early in training camp.

“I’m good,” Burrow said this week when asked if he’s ready. “I’m excited about everybody that we have on the team. We have a lot of experience at the top, but I think we have a lot of depth this year that maybe we haven’t had in the past.”

Here’s what to look for in Game 1:

Every single Bengals defensive player has acknowledged that it will be a different look with sixth-year quarterback Mitch Trubisky calling signals rather than Ben Roethlisberger. Big Ben could extend plays but he was not a run-first quarterback. The Steelers, with Trubisky in charge, have that option and it will be critical for the Bengals to keep eyes on him at all times. This is probably the biggest defensive challenge the Bengals will face on the day.

The Steelers have a banged up Diontae Johnson and Chase Claypool as deep threats but they feel that in rookie George Pickens, they’ve added a dynamic playmaker capable of continuing a great college career. Pickens was a second round pick this April out of Georgia. The Steelers don’t think they have just a great young receiver but one who can block like a monster on the edge. Bengals DBs have no doubt been shown clips of his work with the Steelers in the preseason and his time at Georgia, especially last season as the Dawgs won the national championship.

Welcome to the NFL Mr. Volson. Your first assignment as a rookie starting left guard to go head-to-head and toe-to-toe with one of the best defensive tackle in football in 11-year veteran Cam Hayward. Sure, Volson will get some help from Ted Karras but no doubt the Steelers will line Hayward up in three-technique to try and get on the outside (left) shoulder of Volson to see if he can handle this test. At least Volson has seen live game reps in the preseason.

Last season, in the 41-10 blowout win over the Steelers, Mixon had a career-best 165 yards on 28 carries. He had 90 yards on 18 carries in the Week 3 win in Pittsburgh. Now, the Bengals offensive line figures to be even stronger. No better way to neutralize the Steelers impressive front than run right at it. Former Bengal Larry Ogunjobi should play a prominent role with Tyson Alualu, Hayward and Watt.

Henry Mondeaux (starting RDE with Heyward at nose) washed down the line. Devin Bush can't get off the block. Cam Sutton stalked by Chase. Joe Mixon rips off a 25 yard on the third play of the game. #Steelers pic.twitter.com/5uZ3JnXZgz

When the Bengals need to pass, Burrow will need to be on time and avoid Watt up front and move Jack and Fitzpatrick with his eyes. Being on time is something Burrow and OC Brian Callahan have indicated they’ve worked on coming into this season. They get a good test of this coming into the first game. If the Bengals get Mixon going to any degree early, Burrow should have a field day in play-action to new target Hayden Hurst. Play-action is one area of Burrow’s game that Burrow himself said he would like to improve this season.

"He looks to my eye like he's ready to roll." Brian Callahan on Joe Burrow to start 2022. #RuleTheJungle pic.twitter.com/4A4tJWuYKs

In the first game last season, Najee Harris the running back was not the threat that Najee Harris the receiver was. Harris gained just 40 yards on the ground on 14 carries, half of which came on one run. But in the pass game, Harris had 14 catches on 19 targets for 102 yards. Some of that was Big Ben checking down but still an impressive number. In the 41-10 Bengals blowout in November, Harris had eight runs for 23 yard and just three catches for 14 yards.

If the Bengals take care of the football and can win the turnover battle by creating a couple by Pittsburgh, there’s no reason the Bengals shouldn’t find a way to overcome the opening day jitters and get the season off on a winning note. Getting our first look at how Dax Hill will be employed in Lou Anarumo’s defense should also be worth the price of admission, along with a couple of deep balls to Tee Higgins and Ja’Marr Chase. Mixon with two touchdowns, including one inside the 10 should put this one in the win column and make it four straight over Pittsburgh for the first time since winning six straight between 1988-90.