Bengals defense to face stiffest test of the season in Patrick Mahomes. 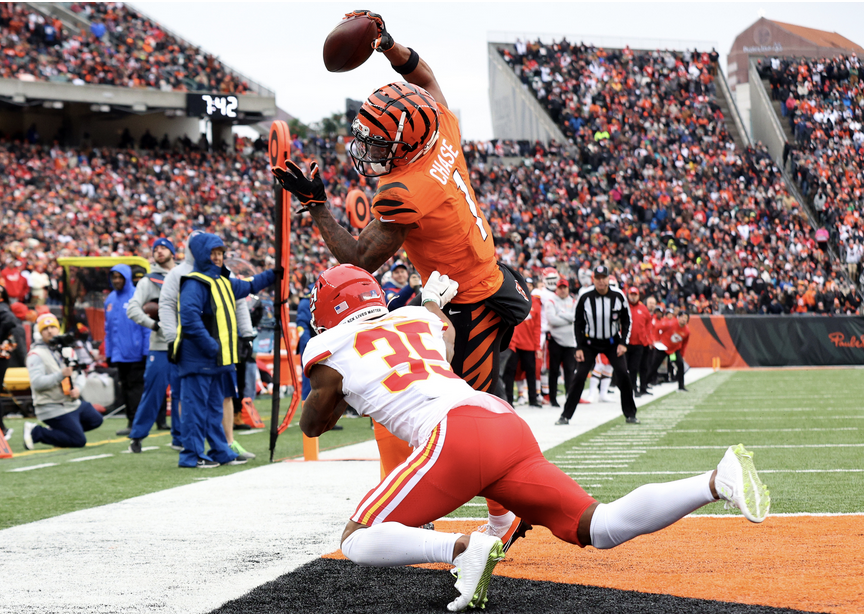 CINCINNATI – The hype train has been a fun and entertaining appetizer. Now it’s time for the main course.

Burrow-Mahomes III is here and there’s plenty on the line.

The Chiefs are looking to stay a game ahead of the Bills (victorious on Thursday over New England) for the top seed in the AFC. The Bengals, riding a three-game winning streak, could close the AFC gap to one game and even take over the AFC North if the Ravens lose to the Broncos.

Bengals coach Zac Taylor confirmed Friday that Ja’Marr Chase is “on track” to return after a four-game absence due to a hairline hip fracture. The Bengals have gone 3-1 without him. Chase joins an offense filled with weapons that Kansas City’s Justin Reid said will be “locked up” on Sunday when they face the Chiefs defense.

Joe Mixon did practice all week but remains in concussion protocol. He is day-to-day and questionable for Sunday. Logan Wilson missed practice Friday with an illness but will play if he feels better by Sunday.

The Bengals now turn their attention from one of the league’s top rushing threats to an unparalleled Chiefs passing attack led by superstar quarterback Patrick Mahomes. Kansas City’s 430.0 total yards, 315.2 passing yards and 29.6 points per game each lead the NFL.

“You’ve got to elevate your play when you’re going against one of the best quarterbacks to probably ever do it,” safety Vonn Bell said. “He makes his guys better around him, so we’ve got to answer the bell. It’s always a challenge going against him, and we’ve answered the challenge every time we’ve gone against him. He’s raised his level of play and we’re ready for the challenge this week.”

The contest is a rematch of last season’s AFC Championship game, which saw the Bengals erase a 21-3 deficit to win 27-24 in overtime and punch their ticket to Super Bowl LVI. Though both rosters carry over a young, talented nucleus from that game in January, Cincinnati head coach Zac Taylor emphasized on Monday that replicating success against the Chiefs will not be as simple as pulling up old film.

“At this point in the year, it’s totally different,” Taylor said. “We’ll go through and be aware of how those games played out and things they did, and they’ll do the same thing to us, but already looking at the defensive backs, it’s just a lot of different personnel for both teams. You’ve got to be ready for how they’ve evolved over the course of the season, and same with us.”

The Bengals enter Sunday’s tilt on their first three-game winning streak of the season. They have relied on different areas of the roster to notch those victories, with a historic rushing day in Game 9 against Carolina followed by a 355-yard passing performance by QB Joe Burrow in Game 10 at Pittsburgh. It was Cincinnati’s defense that stepped up in Game 11 at Tennessee, limiting Derrick Henry, who came in as the NFL’s leading rusher, to just 38 yards on 17 carries.

“Our D-linemen did a heck of a job on him and really allowed linebackers and the back-end guys to run free and make tackles,” linebacker Logan Wilson said. “When they had opportunities to make plays, they made them. We just tried to limit those explosive plays in the run game. For the most part, I think we did what we planned on doing.”

Offensively, the Bengals broke through a Titans defensive front that entered the game ranking second in the league against the run. Cincinnati, despite missing Joe Mixon due to a concussion, became the first team to rush for over 100 yards against Tennessee since Week 2, finishing with 108 on the ground. It took a collective effort, with Samaje Perine going for 58 yards and Burrow adding 32 on nine carries. After Tennessee took a 10-3 lead early in the second quarter, Burrow led the offense on a nine-play, 92-yard drive that ended with Perine crashing into the end zone to tie it up. It marked the Bengals’ fourth scoring drive of 90 or more yards in the last three games.

Tee Higgins, who has been relied on as the team’s No. 1 receiver in the recent absence of Ja’Marr Chase, finished with seven catches for 114 yards.

“When the going gets tough, I’m going to find the guys that I have the most trust in,” Burrow said. “Tee is that guy. He just continues to make plays when his opportunities come.”

Cincinnati’s defense stood tall once again, holding Tennessee to a field goal to give Burrow the ball and the lead with 6:07 remaining. The Bengals put together a methodical, clock-eating drive that forced the Titans to use all three timeouts before an Evan McPherson field goal attempt with just under two minutes left. His 31-yarder appeared to put Cincinnati ahead 23-16, but an unnecessary roughness penalty on Tennessee gave the Bengals a new set of downs and the win.

This rematch has been 11 months in the making. Patrick Mahomes and Chiefs head coach Andy Reid figure to have lots of tricks up their sleeves for a Bengals defense that has shut them down in the second half of the two games in January. Kansas City had three 14-point leads against the Bengals on Jan. 2 and couldn’t hold it, falling 34-31 at Paul Brown Stadium as the Bengals clinched the AFC North. In the AFC Championship, the Bengals fell behind 21-3 and engineered one of the greatest comebacks in NFL playoff history – yes, right there with 28-3 by the Patriots in Super Bowl LI. Here’s thinking the Bengals won’t tempt fate again. Joe Burrow will look to get Ja’Marr Chase involved early and then lean on others. Travis Kelce will get his in this game, and probably score twice, but how the Bengals secondary fares against JuJu Smith-Schuster and Marquez Valdes-Scantling will likely determine how well they’re able to contain Mahomes. Another Evan McPherson field goal in the fourth quarter leads the Bengals to victory again and a step closer to the top of the AFC.