The Celtics acquired Pacers guard Malcolm Brogdon on Friday, who could loom large in a role already filled by Marcus Smart. 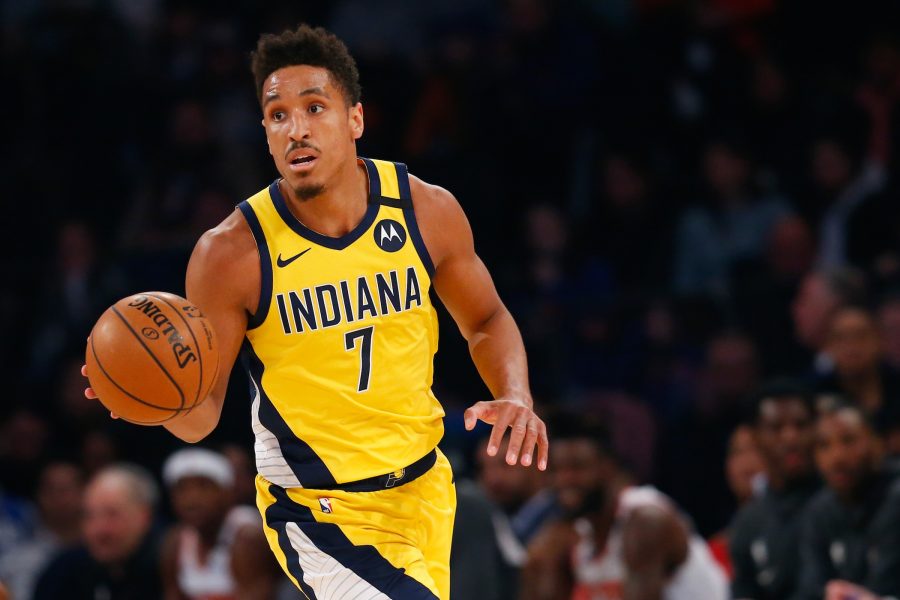 The Celtics bolstered their roster, addressed areas of weakness, expanded their payroll and depth without giving up any significant players or assets on Friday afternoon in a significant sweep for Brad Stevens. Boston landed veteran scorer Danilo Gallinari on a two-year, $13-million contract with a player option, before trading Daniel Theis, Aaron Nesmith and a 2023 first-round pick for Pacers guard Malcolm Brogdon.

Brogdon, 30 next season, comes to the Celtics beginning an extension that pays him $22.5-million annually through 2024-25, aligning his window with Boston’s young core as a possible answer to some of the team’s ball control woes that plagued their postseason. He’ll join Marcus Smart, Derrick White and Payton Pritchard in what’s become a loaded back court filled with defensive versatility, sound passing and decision-making, and now some scoring punch in Brogdon — a career 15.5 points, 4.2 rebounds and 4.8 assists on 46.4% shooting (37.6% 3PT, 88.1% FT). Adrian Wojnarowski classified it as a move for a true playmaking point guard.

It’s an intriguing pivot for Stevens off an NBA Finals run keyed by Smart’s ascension to point guard in the wake of the Kemba Walker trade and the departure of multiple score-first guards before him. Smart himself told The Athletic he felt challenged by Ime Udoka to step into that role, not feeling the trust that he could handle it, before honing in on playmaking to impact a more dynamic, pass-heavy offense to close the season. He helped lead the league’s No. 1 offense in the new year averaging 12.8 PPG and 6.5 APG on 44.7% shooting over his final 33 games. That run faltered into the Finals, where he shot 13.6 times per game, averaged 5.2 APG and turned the ball over 3.8 times per night after a strong Game 1 performance where he sat for most of the fourth quarter.

“I think we need a little more playmaking,” Stevens said last week. “I think that that’s real. I think we need more playmaking, but I don’t think we can expect to be stagnant. We have to make sure we continue to play with pace. When we’re at our best, we play with pace. When we create one advantage, the ball whips around the court. I thought we played pretty slow in (the Finals) … if we can maintain that (defensive identity) and add some playmaking, without a doubt you want to do that.”

The characterization that Boston needed more playmaking is hard to argue with after a postseason where the Celtics posted a 14.7 TOV% in round one that increased to 17.6% in the NBA Finals. The Celtics turned the ball over 16.8 times per game across the six-game loss in the championship, memorizing, but failing to stop themselves from crossing the 15 turnover mark four times in the series, going 1-8 when they committed that many in the postseason. They won 13-of-15 otherwise.

Jayson Tatum’s 15.6 TOV% and Smart’s 14.6 TOV% in the playoffs ballooned above their regular season marks as the team’s primary facilitators. Jaylen Brown made growth alongside both players in that role, in many ways Udoka’s most overarching goal in his rookie season as head coach. The team achieved a 66.7 AST% that led the postseason, with an unselfish offense built around ball movement that grew stagnant in key moments, but nobody could stop the bleeding when the turnovers started flowing. Boston’s defense did its job on a lengthy run and became its main identity. The Celtics’ offense failed them on the big stage.

“(We) guarded well enough. Offense was a hindrance there,” Udoka said after the Finals. “More so than anything just our consistency in general.”

Enter another playmaker and an ultra-reliable shooter and bench scorer in Brogdan and Gallinari. Brogdon, a former 50% FG, 40% 3PT, 90% FT milestone achiever in 2018-19 as Giannis Antetokounmpo’s point guard in Milwaukee, came at a cheap price due to an injury-riddled career. He played 36 games last year due to achilles pain, missing 40 of the team’s final 50 games. Back, hip and hamstring ailments limited him to 56 games in 2021 after 54 the year prior (both 72-games seasons). His successful 2019 campaign got cut short into the postseason with a heel injury. He tore his left quadricep in February and missed most of the end of the 2018 season.

That’s where the expansiveness of playmaking comes into play. It’s more than running pick-and-rolls and making great passes. Brogdon, as an open shooter playing off Tatum and Brown, could knock down threes on the weak side, attack the closeouts he would draw on those catches and make plays in the lane. His impact almost compares to the one Boston hoped to receive in White, before he ended up shooting 35.2% from the field and 24.3% from three through the first two rounds of the postseason, averaging 2.5 APG. There’s a chance the Celtics could be trying again to add a layer of playmaking to their team in guard who’s more of a reliable scoring threat. Does that mark the end of White’s time in Boston? Not necessarily, but Brogdon will overtake some of White’s role. There’s a case a 3-and-D wing would fit better off-ball than White if his ball time is further impacted.

That isn’t the case for Smart, who should still receive ample offensive duties and remain in the starting lineup alongside Brown, Tatum, Al Horford and Robert Williams III — statistically the best unit in the NBA last year. While Brogdon’s an adept defender at 6’5″ with some switching qualities, Smart’s ability to defend ones and fives on the same possession is still the greatest overall value Boston has at the position. Brogdon could quickly enter the game to spell Horford’s minutes and go smaller, playing alongside Smart. The closing lineup could include both too.

It is intriguing how Smart will react to a trade aimed at addressing the team’s playmaking woes given how he wore he his role in addressing it as a badge of honor. The notion Boston needed a point guard could be seen as a knock, particularly if it leads Smart to the bench. The Kevin Durant trade looms, and Boston assembled enough depth to get involved in such a deal. If not, Smart and Brogdon will play on the ball less than Tatum, who still needs to advance as a handler himself to make this all fall into place. Having more spacing between Brogdon, Gallinari and Grant Williams will prove pivotal for a player who loved working inside and out, too often seeing Williams, White and Horford miss those kick-out threes. Even Brown regressed on catch-and-shoot triples last year.

Gallinari is a marksman at that spot, converting 41.9% of his catch-and-shoot threes (3.6 att.) with the Hawks last season even in a down year where he averaged 11.7 PPG, 4.7 RPG and shot 38.1% from deep overall. He can score from multiple levels, posting 1.18 PPP on spot up jumpers (88.2 perc.), hitting 65.1% of his shots at the rim and 40.5% from mid-range. He made $21.5-million this season on his contract for a reason, before settling on a roughly $11-million guarantee in his trade to the Spurs for Dejounte Murray, with San Antonio waiving him on Friday. The Celtics got him at the MLE, emblematic of a player entering his 34-year-old season, but still someone who could score at least 10 points showing up off the team’s bench. The defense is less inspiring, part of Atlanta’s disastrous collective on that end in recent seasons, allowing 48.8% shooting to opponents compared to his own 46.5% FG, but the Hawks outscored opponents by 3.4 points per 100 possessions in his minutes.

The Celtics retained their $17.1-million trade exception and opened two roster spots by sending out Nik Stauskas, Juwan Morgan and Malik Fitts’ non-guaranteed money in the Brogdon deal. Sam Hauser and Luke Kornet will reportedly return to Boston on two-year deals that mirrored their ones from one year ago, while Theis’ backup big role could potentially be filled by Wizards free agent big man Thomas Bryant, who’s weighing multiple options, including the Lakers. He’s a 25-year-old, 6’10” strong presence in the post with a jump shot who struggled in his return from ACL surgery last season. Defense isn’t his expertise, but he posted efficient scoring seasons to start his career with Washington and averages 10.2 rebounds per 36 minutes in his career.

“(Brogdon’s) not a rookie,” Stevens said in 2017 during Brogdon’s first season after reportedly recruiting him to Butler. “I say that with complete respect to him. Like, that guy, he knows how to play. He’s known how to play for a long time. He was a tremendous college player who was an ultimate winner, and he’s just picked right up where he left off.”