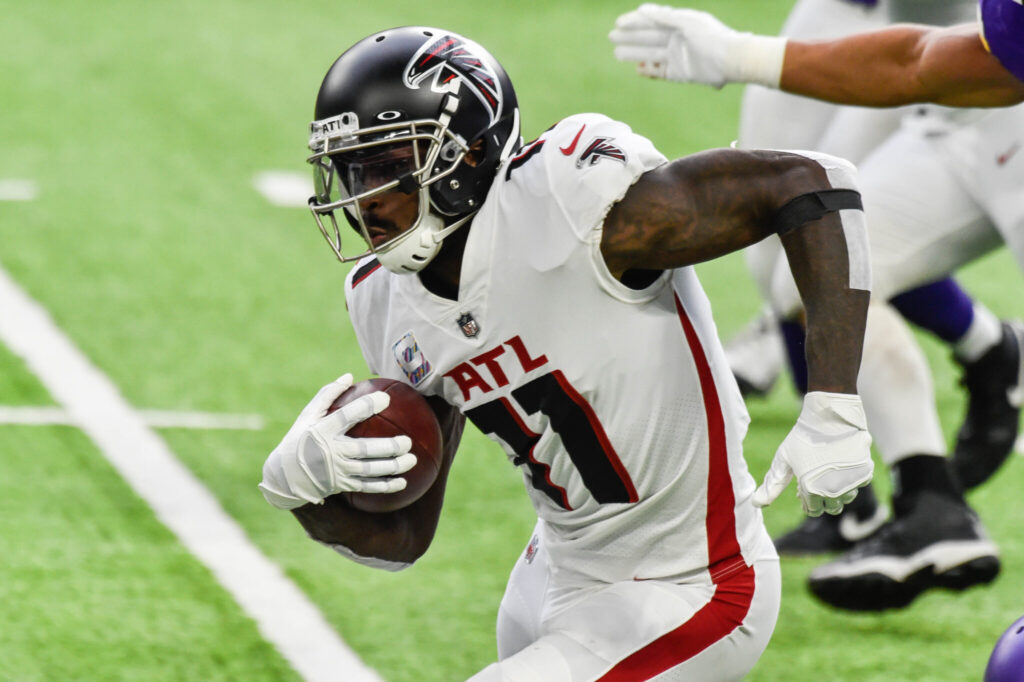 It is looking more and more likely that the Falcons will trade wide receiver Julio Jones by the start of the 2021 NFL season. This Tuesday marks a crucial deadline in Atlanta’s quest for a trade partner, as they can save $15 million on the salary cap if they trade him after June 1.

There are several teams rumored to be in the mix for Jones – with the Patriots being one of them. According to Betonline.ag, they are the third most likely team to land Jones. One week ago they were considered the favorites.

Odds on Julio Jones’ next team if traded:

In an uncharacteristic offseason for New England thus far, CLNS Media’s Evan Lazar says that Jones is the missing piece that the team needs. But what would a trade look like? And would Belichick actually pull the trigger on a deal? New England has been hot and cold with the top-tier wide receiver market in the past. They’ve passed on bringing in big name players like AJ Green, Larry Fitzgerald, and Odell Beckham Jr. They’ve also taken their shots on guys like Randy Moss, Brandin Cooks, and Josh Gordon.

Back in the 2007 offseason, the Patriots traded a fourth-round pick to the Raiders in exchange for wide receiver Randy Moss. Moss was a polarizing figure during his 16-year career, but was sensational during his stint with the Patriots. He was a part of the legendary 2007 16-0 regular season team, whose offense at the time was the best to ever do it. Moss set an NFL record with 23 touchdowns receptions, and helped Tom Brady break the single-season passing touchdown record with 50 (this has since been tied by Patrick Mahomes and broken by Peyton Manning). Moss stuck around for 2-and-a-half for seasons before forcing his way out of the building in 2010. He topped 1,000 yards in each of his three full seasons with the team.

After signing cornerback Stephon Gilmore and re-signing linebacker Donta Hightower, the Patriots topped off an aggressive 2017 free agency period by making a move for Saints shifty wide receiver Brandin Cooks. New England sent the 32nd overall pick and a third-round pick in exchange for Cooks and a fourth-round pick. At the time Cooks looked like a great acquisition. He was both younger and better than Julian Edelman, and added speed to an aging wide receiver room. Cooks caught 65 balls for 1,082 yards during his lone season in New England, and was then flipped to the Los Angeles Rams the following year. The Patriots received the 23rd overall pick and a sixth-round pick in exchange for Cooks and a fourth-round pick.

Just as the 2018 season began, the Patriots once again realized they needed some help with their wide receiver room. After several attempts at helping out their troubled star, the Cleveland Browns sent wide receiver Josh Gordon and a conditional seventh-round pick to New England for a fifth-round pick. Gordon caught 40 passes for 720 yards and three touchdowns in 2018 before once again being suspended. After being reinstated for the 2019 season, Gordon started 6 more games with the Patriots before being placed on the injured reserve and – once again – being suspended. When he was healthy and clean – Gordon was solid, however he could not be counted on in New England.

According to ESPN’s Dianna Russini, Atlanta has discussed several offers for Jones, including a first-round pick. This doesn’t seem likely to happen however – especially from the Patriots end.

When should we expect a Julio Jones trade? And do the #Falcons already have an offer on the table?@diannaESPN joined us earlier Thursday for the latest in the #NFL story du jour: pic.twitter.com/F1F84Z5XOB

If we use their past transactions as a benchmark, the only time the Patriots traded a first-round pick for a wide receiver was for Brandin Cooks. Cooks was 23-years-old at the time – 10 years younger than Jones. New England spent a fourth on Moss, and a fifth on Gordon – both of whom had their own troubles off the field. From all accounts Jones is a stand up guy and teammate. He is however on the wrong side of 30. If a deal with the Patriots were to happen, expect it to be for a second or third-round pick. New England won’t end up in a bidding war for Jones, and they’ll do it on their own terms.