New England has five games remaining in the 2022-2023 season to try and right the ship. 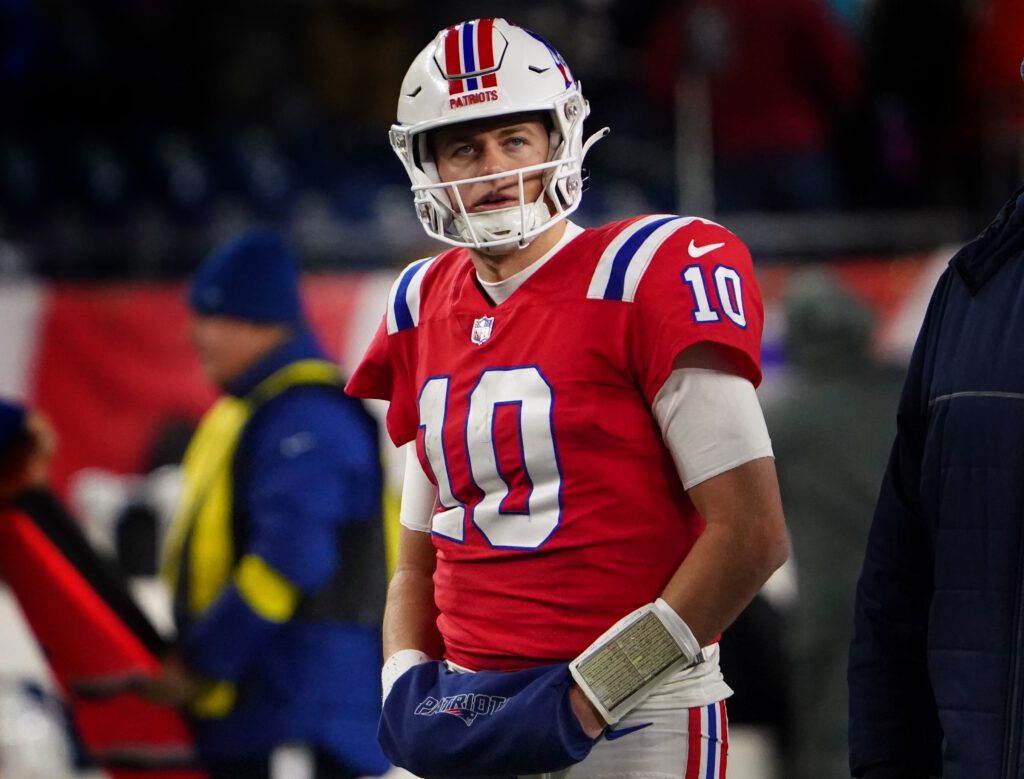 The Patriots came up well short on Thursday night in what could be described as a franchise-altering loss to the Bills.

Not only is New England trickling out of playoff contention, but they’re likely to finish below .500 for the second time in the last three seasons according to BetOnline.ag. Here’s their updated win total on the sportsbook:

BetOnline gives the Patriots a +145 chance (40.82% implied odds) to get to nine wins. They currently sit at 6-6 with five games remaining on their schedule:

Three games on the road, two at home, and three against teams that are .500 or better and in playoff contention. It’s easy to think that they can get to 8-6 with wins versus the lowly Cardinals and Raiders, but with frustration continuing to mount internally about the lack of production on offense, I wouldn’t count on it. Here are some quotes from New England’s skill players last night on their frustration with the offense:

“I think it’s accountability. It starts with me. I think I want to be coached harder. I want to be a better player. The coaches have given us everything they’ve got. They’ve done everything to put us in position to win. But I want to hold everybody accountable, including myself. I think it’s tough, right? You get called out a little bit, you have to admit that you didn’t do your job. That’s part of the game. A lot of that blame falls on me. I didn’t do my best tonight. I think a lot of other guys played with a lot of good effort. We played with effort. I played with effort. I’m going to give it everything I’ve got every week, no matter what. I’ll go until the wheels fall off. But got to be better executing plays.”

“It’s hard. It goes into the aspect of it, you go to the sideline you’re just like, ‘man.’ You can’t not believe in your abilities, you know we’re all here for a reason. It’s just frustrating as a man, you know what I mean? We’re all men in here and we all want to contribute, but it’s just hard because it’s 11 men. One person can’t mess up, it’ll mess up the whole thing. It’s just about being mentally strong every single play, every single second of the game. It gets frustrating, it’s just a part of the NFL.”

“We’re just not consistent enough. We drive the ball into the red area and things like that, but we can’t score. So we just need to work on that and work on finishing our drives.”

Mac Jones, as the usual leader he is, was fair with his criticism – but him saying “I want to be coached harder” is telling. Here’s a clip of Jones’ built-up frustration with where the offense is at, caught by the Amazon Prime broadcast:

The idea of a former defensive coordinator and failed head coach calling the plays for a second-year quarterback was a disastrous decision from the start – and it finally hit its breaking point on Thursday night.

No matter how New England finishes their 2022 campaign, there’s one thing that’s already a definite: the offensive coaching staff needs a complete overhaul in 2023 in order to save Mac Jones. There’s a real chance that it may already be too late.