Patriots Odds in Free Fall After Loss to Saints | BetOnline.ag

The Patriots did themselves no favors on Sunday in the eyes of the oddsmakers. 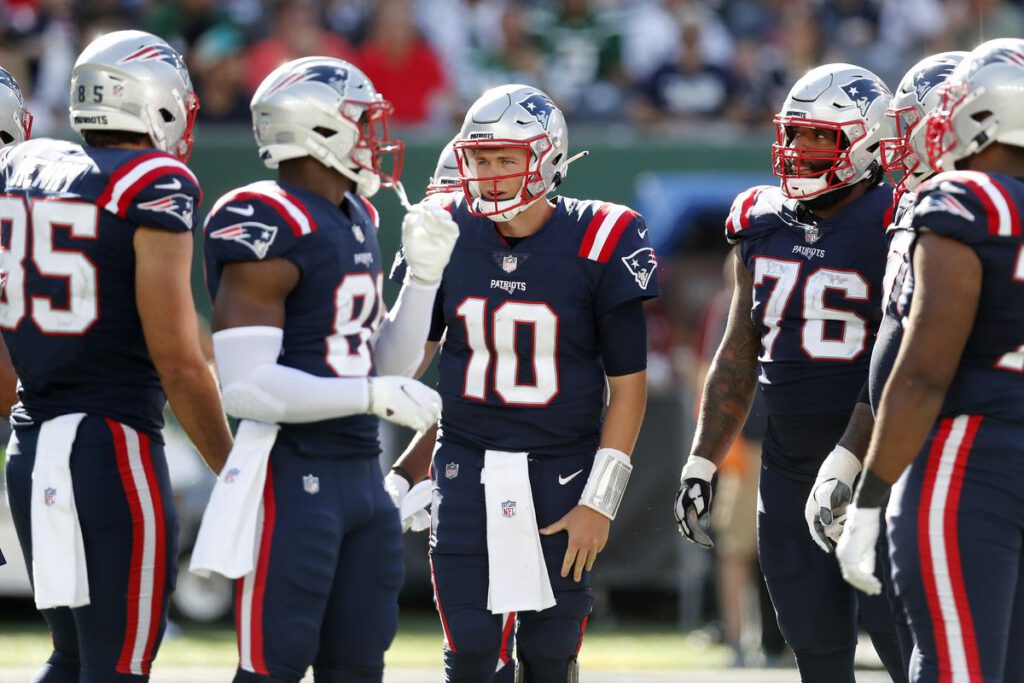 The Patriots showing against the Saints on Sunday was nothing short of a disaster. The 28-13 loss was incredibly disappointing, and realistically shouldn’t give the team any confidence ahead of Sunday nights game against Tampa Bay.

New England’s defense looked okay, but their offense handed New Orleans the game. Rookie Mac Jones threw three interceptions (several of which were not his fault), and tight end Jonnu Smith looked like he’d never caught a football before. Smith had one catch on SIX targets. One of his drops directly resulted in six points for the Saints.

On top of the offensive struggles, the team committed four penalties for 30 yards. They also only had 10 defenders on the field for the Saints game sealing touchdown. Despite out-gaining the Saints by over 150 yards in the air (251-110), the Patriots mental mistakes and their lackluster run game sealed the victory for New Orleans.

Looked like the Patriots had 10 players on the field for the Taysom Hill touchdown run in the fourth quarter. @BobSocci all over it. Just mentioned it to @Toucherandrich. pic.twitter.com/DjWktiRzt2

The oddsmakers at BetOnline.ag see just how disappointing the Patriots have been as well, as their odds have plummeted across the board.

New England’s odds to win Super Bowl LVI took a massive hit. After a slight increase following their win against the Jets, (+3500 to +3300), the Patriots now have just 60/1 (+6000) odds to win the big game in February. This has them tied for 18th in the league, the same odds as the Carolina Panthers..

Following the trend, the Patriots odds to win the AFC East division also went down.  Per BetOnline.ag, their odds went from 7/2 (+350) to 6/1 (+600). They are second behind the Buffalo Bills, who are the overwhelming favorite at -450.

The placement on this @JoshAllenQB touchdown throw. #BillsMafia

Mac Jones Rookie of the Year

The one player on this Patriots that continues to shine semi-bright is rookie quarterback Mac Jones. Jones has played solid football through his first three weeks, even though the rest of the team has not. Despite playing well, his odds still fell this week on the BetOnline.ag board. Jones is now trailing Bengals wide reciever Ja’Marr Chase with the second highest odds to take the trophy home. Chase’s odds skyrocketed after week three from 9/1 (+900) to 3/1 (+300), while Jones fell from 5/2 (+250) to 9/2 (+450).

I still think Jones is a decent bet to make here, as quarterbacks have won the award each of the last two seasons. However, the Patriots need to start winning some games in order for him to do so. I don’t expect them to pull off the Tampa game, but if they can string some wins together after week four, then Jones has a good shot at Rookie of the Year.

This is how the #Patriots need to consistently operate in passing situations. Mac in the gun, spread the field, give the QB/O-Line a good look at the blitz, Hunter Henry on a safety. Ball out fast and past the sticks. Quick, efficient, find the matchups. pic.twitter.com/SXzy1ae6Br

This is an incredibly important week for the Patriots. Not only is Tom Brady returning to the place he called home for 20 seasons, but New England very well could sit with a 1-3 record after Sunday. A team that many thought should have playoff hopes could be fighting for their lives going into week five. It’s awfully poetic that Tom Brady could be the one putting them in this position..

We’ll have you covered all week for Patriots vs. Bucs here on CLNS Media, and at our YouTube channel, Patriots Press Pass.