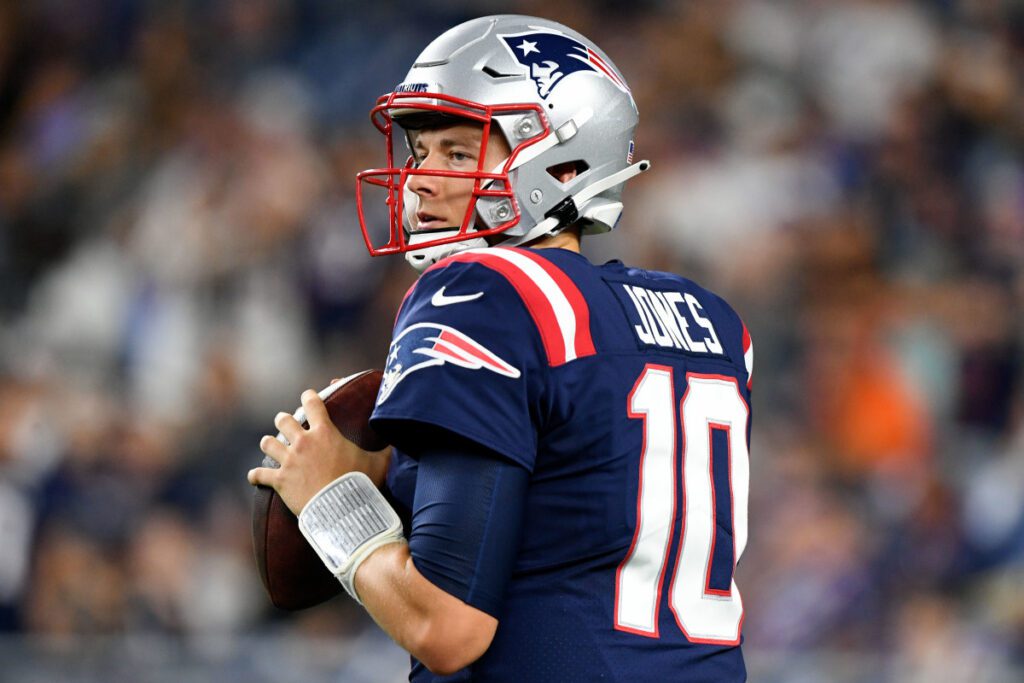 After two joint practices in Philadelphia this week, the Patriots will take on the Eagles this Thursday night on NFL Network. The game will be played at Lincoln Financial Stadium, with kickoff at 7:30pm.

It’s never to early to place a bet on the NFL! Here are the betting lines for tonights game from our exclusive wagering partner, BetOnline.ag:

NFL teams had to cut their rosters down to 85 players by Tuesday of this week. The Patriots casualties included DL Rashod Berry, TE David Wells, OL Jerald Hawkins, WR Marvin Hall, and TE Troy Fumagali. It was originally reported that Hall was cut, but they ended up moving him to the injured reserve list. Same goes for Fumagali.

It was an Alabama Crimson Tide reunion at the NovaCare complex this week, with two former signal callers – Jalen Hurts and Mac Jones – set to face-off against each other.

Both QB’s played on Alabama’s 2017 national championship team with Patriots running back Damien Harris and Eagles wide receiver Devonta Smith. They are pictured below alongside Eagles center Landon Dickerson. Dickerson was not on the 2017 team, but won a national championship with Mac Jones at the helm in 2020.

From all accounts, the Eagles outplayed the Patriots this week during their two practices. According to CLNS Media’s Evan Lazar, the Patriots defense struggled mightily on day one, and were only a little bit better on day two. What stood out to Lazar was an “inability to cover tight ends Dallas Goedert and Zach Ertz.”

Both Cam Newton and Mac Jones looked sharp in the teams 7-on-7 drills on Tuesday. Here are the full numbers from Phil Perry:

Because we know you love quarterback numbers, here are today's…

Cam and Mac are my top two players to watch this week.

The tell-all in the Patriots quarterback competition will be how much Newton plays on Thursday. With the preseason shrinking to only three games, tonight would be the night your starter gets as many reps as possible with the first team, before sitting on the last game. Newton played fine in his limited reps against Washington, but he’ll have to improve to keep a hold on his starting job.

The rookie played well in his NFL debut last week, and he’ll look to build off it tonight. Another tell in the QB competition will be if Jones gets reps with the 1’s or the 2’s. Tonight’s the night that Jones can either make this decision tough on the Patriots, or hand the job to Cam to start the season.

Agholor is expected to play Thursday after missing both recent practice time and last Thursday’s game against the Washington Football Team. Agholor is slated to the the Patriots WR1 this season, so it will be interesting to see the rapport he’s built with both Newton and Jones against a live defense.

The last two weeks have been filled with Patriots tight end news. Devin Asiasi was pulled off of the COVID-19 list last week, and both Hunter Henry and Jonnu Smith are sidelined with injuries. Due to the recent cuts of David Wells and Troy Fumagali, Asiasi was the only active tight end in practice on Tuesday. It will be telling to the tight end room to see what the second-year pro can do with a heavy workload tonight in Philadelphia.

Chase Winovich seems to be in no-mans-land in a stacked Patriots front seven. After coming off of PUP recently, I’m curious to see where Winovich lands in the Patriots scheme, and who he plays with. Wino could be a surprise cut candidate if he can’t find his niche in the defense.

Joejuan Williams had himself a week this week, taking starting cornerback reps for two straight days against the Eagles. This moves Jalen Mills back to his more comfortable safety position. The Patriots are struggling to find their way in the secondary without Stephon Gilmore, but hopefully Williams can change that.

The two tight ends the Patriots brought in this offseason – Henry and Smith – are both listed as questionable for Thursday’s game. Although Henry was seen on the field this week, both are expected to be OUT tonight. Tight end Troy Fumagali cleared waivers and reverted to the Patriots IR.

Marvin Hall also cleared waivers and was sent to the IR. Chase Winovich is questionable after coming off of the PUP list.

Kicker Jake Elliott is questionable with an ankle injury, and tight end Tyree Jackson is out after fracturing a bone in his back. He is expected to miss 8-10 weeks.

Running back Kerryon Johnson was placed on the injured reserve after clearing waivers this week.

The Patriots defense needs to step it up after struggling to contain the Eagles offense on Monday and Tuesday. I expect them to rebound and play better in a game situation.

Offensively, it will once again be the Cam and Mac show. I’m going to ride the two quarterbacks again this week.