Boston advanced past the Miami Heat on Sunday and will play in their first NBA Finals since 2010. 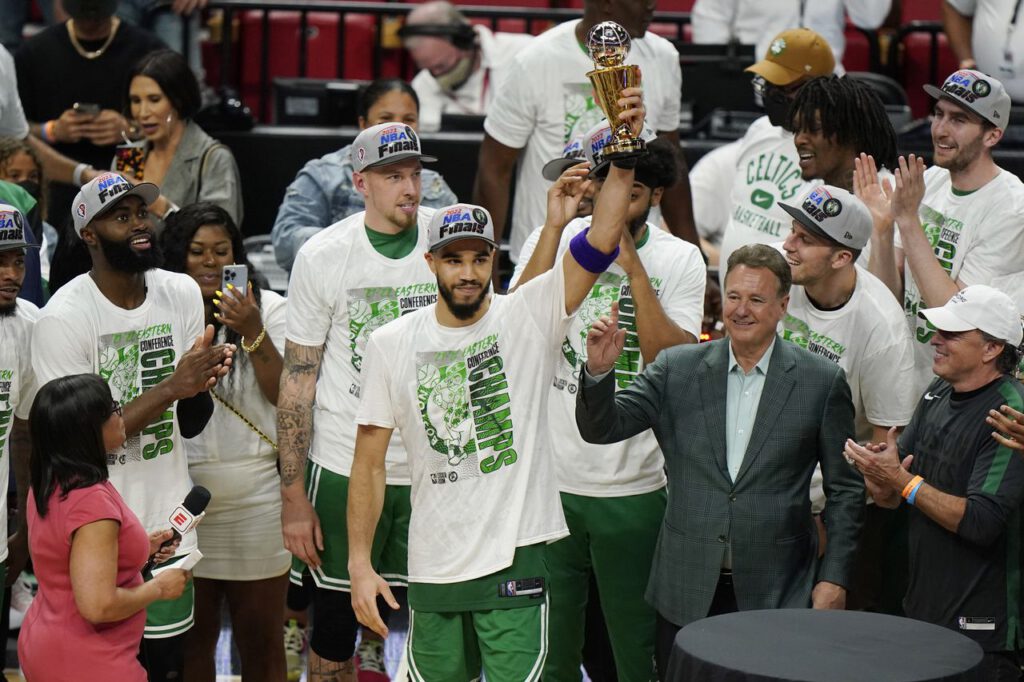 To be honest, I didn’t expect them to – but they did it. The Boston Celtics outlasted the Miami Heat 100-96 in Game 7 on Sunday night and will face off against the Golden State Warriors in the NBA Finals.

Jayson Tatum once again paced the Celtics with 26 points – shooting 4-7 from the three point line and grabbing 10 rebounds. He was awarded with the 1st Annual Larry Bird Trophy, going to the Most Valuable Player of the Eastern Conference Finals.

Marcus Smart and Jaylen Brown each scored 24 points for Boston, keeping their feet on the gas to finish it out unlike they did down the stretch in game six.

Al Horford once again wasn’t great on the offensive end, but he played tight defense and grabbed 14 rebounds in the win. With Rob Williams playing limited minutes and frankly looking like a shell of himself, Horford’s rebounding was exactly what Boston needed.

The Heat got another outstanding performance from Jimmy Butler, who scored 35 points and played all 48 minutes. With Boston holding a 98-85 lead with just over 3:35 to go, Miami closed the game out on a 11-2 run and were a Butler three-pointer away from going to their second Finals in three seasons.

Boston – thankfully – prevailed. and are headed to their first NBA Finals since 2010. Here is the series price for their matchup against the Warriors, according to BetOnline.ag:

Checkout out the CLNS Media postgame show from Sunday night’s game 7 HERE on the Garden Report:

As much crap as I gave the Celtics during this series – I did pretty much predict how it would go spot on. Here was my preview of the ECF from two weeks ago:

The Heat are going to be just as tough as Milwaukee was. They’re the deepest team in the NBA and have an absolute assassin in Jimmy Butler leading the way. Butler leads them in scoring this postseason averaging 28.7 points per game.

Erik Spoelstra established himself as a top-tier coach in this league during the Lebron era in Miami – and he hasn’t slowed down since. He was named one of the “15 Greatest Coaches in NBA History” alongside the NBA’s Top-75 Greatest Players for the 75th Anniversary.

Prediction: Much like the semi-finals against the Bucks, this is going to be a grind of a series. However, Boston is the most well-rounded team, and has the most well-rounded player in in the league Jayson Tatum. The Celtics (-170) wins the series in seven games and advance to their first NBA Finals since 2010.

This NBA Finals series will continue to be a grind just like the Eastern Conference ones were. Golden State is a seasoned group of veterans who have been here before. Though Boston does have the only winning record against the Warriors since Steve Kerr took over in 2014, a 7 game series is completely different than a one-off trip to Oakland in January.

Boston has their work cut out for them, as Steph Curry and Klay Thompson will certainly be a handful, but at this point – it just feels like their year: