Celtics Vulnerable in Key Areas in Loss to Pacers

The areas where the Celtics can be exposed were on display in their loss to the Pacers. Al Horford sat and defensive rotations got broken. 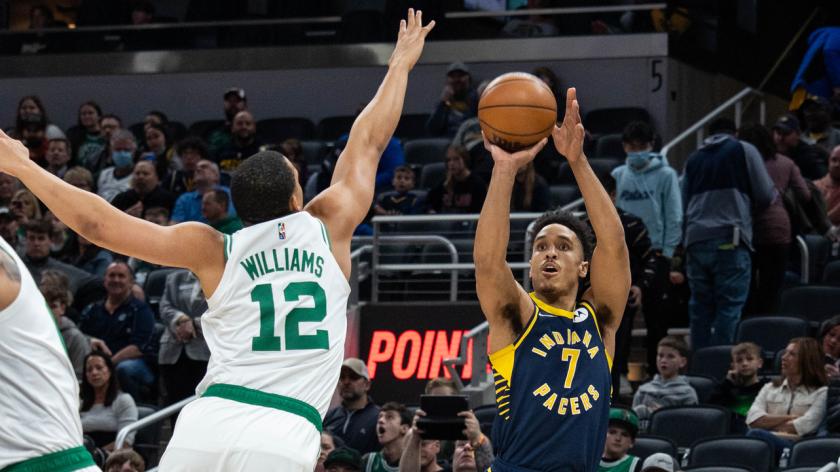 The Indiana Pacers, of all teams, piled all four on the Celtics during a 128-107 upset win on Sunday afternoon. Boston sat Al Horford, shot 26.5% from three while leaning into the deep ball in the fourth quarter and Tyrese Haliburton seamlessly penetrated the Celtics’ defense that had been unassailable going back to mid-January. Four games around the all-star break featured the downsides of tradeoffs Boston made at the NBA trade deadline, their defense slipping from its sub-100 defensive rating over the past month to allowing over 107 points per 100 possessions over the past six games. Their offensive activity increasing. Their shooting turning for the worst.

“I think, especially Detroit and this game, we weren’t as physical as we needed to be from the start,” Ime Udoka added on Sunday. “We talked about it pregame a little bit where you give teams confidence where they can get into a rhythm. We haven’t been coming out to good starts in the last two specifically. Even Brooklyn was ok, we were defending ok, they were a little depleted … the open looks that they got tonight, some of the miscommunication in coverage hasn’t been as sharp in the last two for sure.”

While Sunday’s loss, in a vacuum, stemmed from an outlier 6-for-9 Oshae Brissett three-point shooting night, various Haliburton circus floaters and lethal isolation play from Buddy Hield, the combination of old Celtics bad habits reemerging and roster concerns on display gave a peak into how things could go wrong as predictions of a long postseason run become more popular. Celtics worst-case scenarios are worth examining after a month where everything went wright for this group, including building a 60-point lead on Haliburton and Hield in their waning days wearing Kings uniforms.

Horford sitting out Boston’s loss in Indiana after a 37-minute effort to escape Detroit the day before with the win had a spiral effect. Grant Williams started in his place and became easily switchable into and out of actions. As the Pacers attacked downhill, Williams III got drawn into the lane away from Brissett, who peppered the Celtics with three consecutive open makes from deep late in the second quarter.

Haliburton stressed Boston by hitting a shot from half court and moving Celtics defenders into odd angles. He ran the kind of pick-and-roll necessary, with unsung screeners like Isaiah Jackson, to pull Williams III back directly into actions, as opposed to Rob’s off-ball roving that’s made Boston’s defense unbreakable recently.

Just like Derrick White couldn’t step in for Marcus Smart’s absence in the loss to Detroit before the deadline, Grant struggled in Horford’s place as Hield piled up nearly all of his makes against the Celtics forward. Horford stands among the top perimeter shot contesters in basketball. Daniel Theis got torched in a new double big look alongside Williams III, as well as in spot five minutes after not factoring in the past two games.

Payton Pritchard, who scored 19 points with six assists in crucial extra run with Smart in foul trouble in Detroit, had to help again to manage minutes on the back-to-back and with White unable to knock down threes. Pritchard’s entry to lineups, however beneficial for spacing, can breed unfamiliarity defensively. When deeper rotation players like him enter games, uneven switch like we watched in November reappears.

That’s why Udoka received positive results from shortening his rotation before this recent stretch of winning began, noting he’s preparing his players for playoff minutes. His five starters and two core bench guys know how to run his defense.

If reserves need to leap into larger roles due to injuries or whatever reason later, that’ll inevitably leave his decision being second-guessed if the team can’t connect deeper into its rotations as we saw Sunday. There’s a world where everything works and his lineups are rendered genius, or one where they’re left saying “we weren’t healthy.” The latter would be hard to swallow given the lack of developed contingency plans.

“It’s a thing where, obviously the change happened with Josh Richardson and Dennis being gone,” Udoka said, describing his rotation. “So obviously we want to see Payton in extended opportunity, which he’s done a great job, and like I’ve said we’re confident in him doing that. Adding Derrick to the mix gives us some versatility, but you have a guy like Theis as well for nights like this where it’s a back-to-back and Al played heavy minutes last night. We’re comfortable, confident playing him. Then you have Aaron Nesmith and other guys as well. We’re confident with going 9-10 deep, it kind of depends on the flow of the game and how Al or Rob is playing, if we decide to spin the three-man big rotation, or keep it at two with Grant in there … we’re kind of familiar with what we have there already.”

The Celtics traded off reliable rotation depth at the deadline and now find themselves effectively seven players deep most nights. Their defensive system plays on a string such that any injury or case of foul trouble could undermine everything they’ve built in early 2022. Boston’s starters average an 89.6 defensive rating. With Williams in for Horford that rating regresses to 100.6, posting a better offensive rating, but swaying from the team’s identity.

Boston proved that it could lose one starter in a historic blowout win Philadelphia without Williams III, while on Sunday, Williams III showed his ability to defend within the action as well as away from it, making Haliburton bail out of this switch on to him before Williams III reestablished himself inside to deflect second and third-level drives by blocking Malcolm Brogdon and sending a go-ahead pass to Jayson Tatum for points in transition.

Williams III’s disruptive third quarter helped the Celtics cut a 19-point deficit to seven. Then, the Celtics attempted 11 of their first 15 field goals in the fourth quarter from three. What started as some habitual isolation play by Tatum regressed into wasting repeated second-chance opportunities created by Williams III and even Pritchard by launching more triples.

Missed shots by the Celtics festered into a 9-for-9 layup line for Indiana in restricted zone the other way, capped by Williams in-bounding the ball directly to Chris Duarte for two more points to go down by 19 points after a Brissett layup fell in front of Williams. A close game looked worse due to an old familiar foe — fourth quarter execution.

Three-point shooting never projected to be Boston’s strength despite it emerging while they won 18-of-23 shooting 36.3% from deep. They did lose perhaps their best catch-and-shoot threat in Josh Richardson (41% 3PT wide open) in the White trade, with Dennis Schröder (30.1% 3PT wide open) able thrive in spot starts when needed.

White (13.3% 3PT wide open) struggled to do both after his 4-for-7 three-point shooting debut against Denver, where he confidently led the second unit. Since then, he’s shooting 36.4% from the field and 20.7% from three overall.

The Celtics could never have it all. White’s three blocks, a charge take and steal piled up extra possessions that didn’t matter in a game where Indiana shot 51.5% from three in. Boston decided to double down on making themselves even more disruptive defensively at the deadline, making quicker decisions in the half court (the Celtics rank 6th in AST% since White joined the team) and playing faster. Those three things have largely happened, even if White hasn’t played well individually.

Consolidating, accentuating their strengths and removing players who didn’t fit Udoka’s stylistic emphasizes could still prove right even if it’s not a slam dunk. That’s better than having no path to winning the east. It’s also worth acknowledging how easily it could all go wrong, as lottery teams in the Pacers and Pistons produce tape how far attacking the weak side and playing physically inside can go toward disrupting Boston’s formula.

“We didn’t come out at physical as we wanted to,” Udoka said post-game on Sunday. “What we showed at halftime was the lack of physicality and connection, and allowing them to get in a rhythm and make some easy shots early. Then it kind of snowballed where they did hit some tough ones where we did defend better … Haliburton, Hield, those guys were kind of walking into threes when we were underneath the three-point line.”