A deep dive into Matt Patricia Bowl from Sunday afternoon in Foxboro. 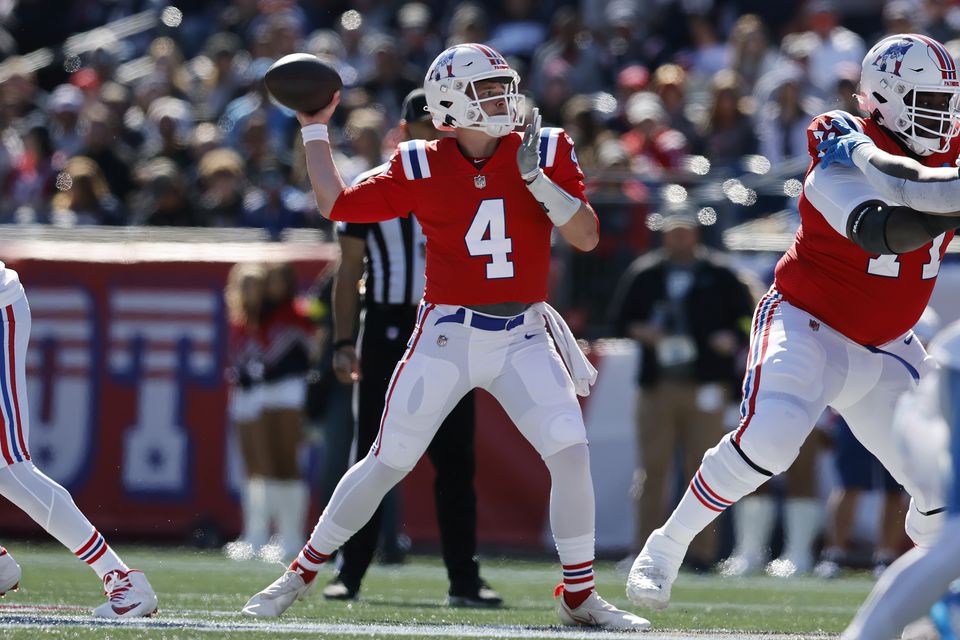 FOXBORO, Mass. – Down to their third string quarterback, and despite being 3-point favorites, many expected the Patriots to rollover and die today in their matchup against the Detroit Lions.

They did the exact opposite of that.

Sporting their famous “Pat Patriot” red throwback uniforms with white helmets, and inside an absolutely rocking Gillette Stadium, New England took care of business – shutting out the Lions 29-0 and improving to 2-3 on the season. Here’s a look at the days scoring drives:

As always, there’s so much more to a game than just the box score.  Here are my five takeaways from today’s Patriots win:

Both Matt Patricia and Bailey Zappe did their jobs between the 20’s on Sunday en route to a dominant Patriots victory.

Having said that, once the offense got inside the red zone, the entire operation needed some work. Though Nick Folk’s 5 FG’s were okay in a game like Sunday’s where they were in complete comtrol – they’ll need to improve in the red area if they want to keep chalking up wins.

4. Rhamondre Stevenson should be treated as the Patriots bell cow.

No disrespect to Damien Harris, but Rhamondre Stevenson is that dude.

The Patriots second-year running back ran for 161 yards on 25 carries today against the Lions defense, and he brings so much to the table as a RB on his rookie contract. He’s such a patient runner, he has incredible field vision, and his balance is off the charts – as you saw on his long run in the first quarter.

He should be getting the bulk of the carries in this Patriots offense. With Damien Harris leaving Sunday’s game due to injury, that could be the case moving forward.

3. I’m beyond done with Nelson Agholor.

The Patriots signed wide receiver Nelson Agholor to a big money contract two seasons ago. After a disappointing 2021 campaign, it looked like a mistake.

But this year? It looks like an absolute travesty. Agholor being a no-show last year was one thing, but 2022 has been a completely different beast. The wide receiver now has three incredibly costly mistakes/turnover through five games for an already up-and-down New England offense. The one thing they need is consistency, and they don’t have that at all with Agholor.

The Patriots should be thrilled that rookie Tyquan Thornton is healthy and can spell Agholor moving forward.

2. Keeping up with the Joneses!

Marcus and Jack. Jack and Marcus. Whatever order you want to put them in, both cornerbacks have came to play for the Patriots during their rookie seasons.

Jack Jones, who came up huge in his first NFL start last week, was awesome yet again on Sunday vs. the Lions. He was credited with two tackles, a pass deflection, and made a highlight INT on Jared Goff – his second of the season.

Meanwhile, Marcus Jones once again looked solid in the return game – and made a difference on defense when given an opportunity.

1. The Patriots defense is the reason they can compete for an AFC Wild Card spot.

You may say to me “oh come on, it was just the Lions”, but this team was leading the league in points-per-game (35) coming into this thing, and the Pats just shut them out.

Matthew Judon looks even better than a year ago, the linebackers are fast and can cover outside the tackle box, and the backend is flying around, turning the ball over, and not getting burnt in coverage nearly as much as in 2021.

This New England defense is scary. All three levels have massively improved from last season, and it’ll be the reason why they win gmes down the stretch and compete for a playoff spot in the weakened AFC conference.

New England heads to Cleveland next weekend to take on the Browns, and then returns home the following Monday night for a primetime matchup agains the Chicago Bears.

As always, we’ll have you covered here on CLNSMedia.com for every bit of Patriots news over the next two weeks as they try to get to 3-3. Make sure to keep it here!