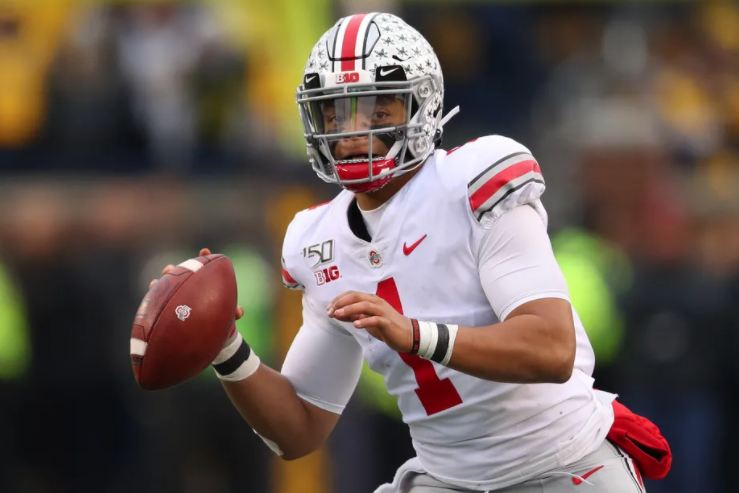 Ohio State quarterback Justin Fields has his second pro day in Columbus on Tuesday, and the Patriots were one of several teams to attend the workout. Other notable teams present included the New York Jets, the San Francisco 49ers, and the Carolina Panthers.

Highlights from the pro day included this cross-body bomb of a throw for a touchdown.

According to NFL Network’s Mike Giardi however, New England wasn’t just there to take a look at the 2019 Heisman trophy finalist.

The #Patriots have done plenty of work on the QB class and that continues today with Josh McDaniels and Dave Ziegler being at Ohio State for Josh Fields pro day, part deux. Fields not the only OSU player being put thru their paces, however.

Rumors continue to swirl around Fields and the Patriots. In ESPN draft analyst Mel Kiper’s most recent mock draft, he has New England trading up with Dallas to pick number 10 to take the Ohio State quarterback.

If Fields were to fall during the first round of the NFL Draft on April 29, he could be a great fit to be New England’s long-term replacement for Tom Brady. Here are four reasons why:

1. He won’t have to step in and play right away

All signs point to Cam Newton being the Patriots week one starter. The team re-signed Newton to a one-year deal back in March, and they haven’t made any other quarterback moves despite rumors of being interested in 49ers Jimmy Garoppolo.

Newton knows his role here. He wouldn’t have signed the short money, incentive-laden contract if he didn’t, and the Patriots wouldn’t have brought him back if it wasn’t on their terms. Cam has embraced the Patriot Way during his time in New England. Presumably, there is an understanding that Cam is a not the long-term answer here, and would be willing to be a bridge to a young signal caller once they are brought in the building.

Newton would start the season at quarterback so they don’t have throw the first round pick into the fire week one. He can help bring Fields along as he takes in the offense and learns what it means to be a franchise quarterback in the NFL.

2. Fields already has a relationship with Cam Newton

On top of the fact that Newton is only locked in to one more season in Foxboro, he also has a previous relationship with Justin Fields. When Fields was in high school, he participated in Cam Newton’s 7 on 7 league that he ran at Florida’s IMG Academy. Notably, Newton told reporters that Fields, “is the best recruit in the country. Write that down.”

While in high school, Fields told SECCountry that, “growing up when [Cam Newton] was at Auburn, he’s kind of who I modeled my game after… it’s definitely great learning from him.”

There is clearly a relationship here that has the chance to become even stronger in 2021.

3. Urban Meyer, and his relationship with Bill Belichick

When Justin Fields transferred from Georgia to Ohio State in 2019, he just missed the opportunity to play under legendary coach Urban Meyer.

Despite not being their coach, Meyer continued to have connections with the Ohio State program, and has had great things to say about Fields. “It was throwing, believe or not, that he came in as a dual-threat quarterback — he was a runner that threw very well — now, he is a quarterback that just happens to be Braxton Miller fast,” Meyer said. “…there’s no stopping this guy.”

Patriots coach Bill Belichick has a strong relationship with the now Jacksonville Jaguars head coach. Belichick was quoted back in 2019 saying, “I talk to [Meyer] multiple times every season. I have great respect and appreciation for what he’s done, the national championships, and programs that he’s built.” Meyer has also visited Patriots practices several times in the past. He will steer Belichick in the right direction on Fields.

Despite having plenty of success with Tom Brady over the last 20 seasons calling the Patriots offense, McDaniels is a different beast when he has an athletic quarterback at the helm.

When he was the Broncos head coach, McDaniels drafted Florida’s Tim Tebow in the first round of the 2010 draft. Although Kyle Orton was the Broncos starter, he used Tebow in a special package to utilize his legs and left defenders wondering whether he would run or throw.

When Tom Brady was suspended in 2016 and Jimmy Garoppolo injured his shoulder, the Patriots started Jacoby Brissett in their week three game against the Houston Texans. With Brissett under center he unveiled this quarterback sweep for a touchdown:

Jacoby Brissett rushing for the longest touchdown by a #Patriots quarterback since Steve Grogan in 1976. I'm a fan of these uniforms. pic.twitter.com/Te6KZOjd5v

And when McDaniels had a full-time starting signal caller with a set of legs this season, Cam Newton led all quarterbacks with 12 rushing touchdowns.

Justin Fields ran a 4.44 second 40-yard dash at his first pro day, and rushed for 19 touchdowns in college. He can be dynamic in the run game and someone McDaniels would love to work with.

The Patriots would be going against the grain taking a quarterback in the first round. But if Fields were to fall in their range, they’d be making a mistake not jumping up to draft him.