The Garden Report crew of Blakely, Manning, Pavon, Toscano and Zannis offer up their bold predictions for the upcoming Celtics season. 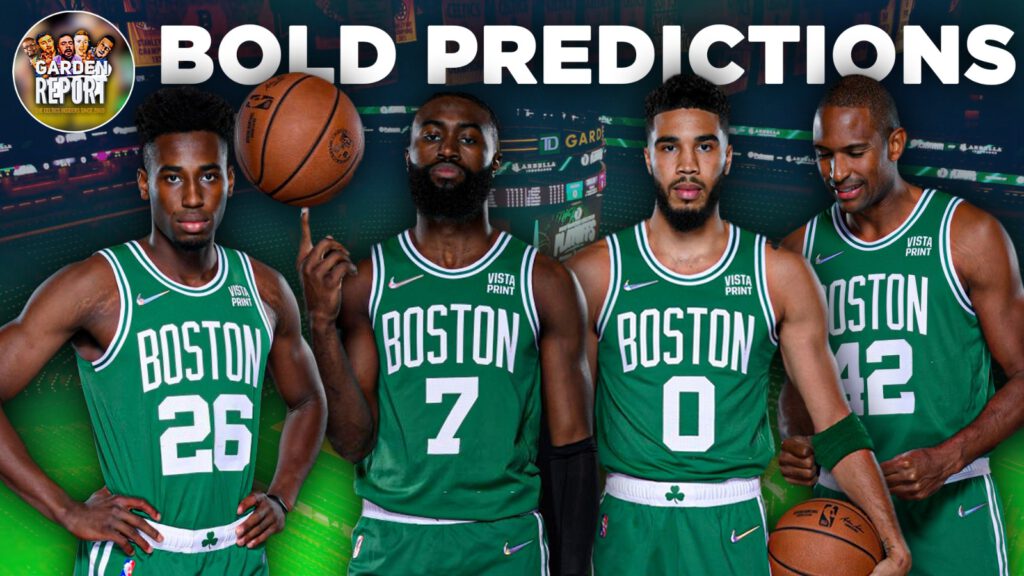 You may be used to us yapping it up on Youtube but virtually everyone on The Garden Report is a writer by trade. So our insiders (Sherrod Blakely, Bobby Manning, Josue Pavon, Jimmy Toscano, John Zannis) decided to put some pen to paper and dial up a few BOLD predictions for the 2021-2022 Celtics season.

1. SHERROD BLAKELY: Jayson Tatum will lead the NBA in scoring this season.

Tatum averaged more than 26 points per game last season and physically looks even better this year. That bodes well for him to be even more efficient and impactful which will benefit the Celtics in the long run as the Celtics All-star approaches 30 plus ppg.

2. BOBBY MANNING: Al Horford will have a better season than Robert Williams.
Horford averaged 14.2 PPG on 45% field goal shooting and 36.8% three point shooting, with 6.7 RPG and 3.4 APG. Williams shot 72% with 8 PPG and 6.9 RPG. These two need and complement each other, and may allow for occasional rest between the two. The question is who closes? Double big likely won’t hit crunch time often and it’ll be difficult to pass on the volume three shooting Horford provides at the five, his ability to run the offense and defend across Boston’s switching defense. Plus, Williams needs to stay healthy, already a challenge this year.
3. JIMMY TOSCANO: Aaron Nesmith outplays the rest of “the kids”
It’s time. We know this guy is an elite shooter. We know he has the ability to go nonstop out on the court (a gift and a curse at times). And we know he’s a cut above the rest of the “kids.” I hope Ime plays him more consistently than Brad did. He just hit like 422 threes in practice without missing two in a row, or something crazy like that. It’s time to get called over to the cool table at lunch. See ya Romeo, so long Grant, we hardly knew ya J-Rich, Rob.. don’t hurt yourself on the way to the cafeteria, Payton.. there might be a seat for you someday but Nesmith is first.

4. JOSUE PAVON: Aaron Nesmith or Romeo Langford (along w/ future draft picks) will be shipped out of Boston via trade.

One of the Celtics’ biggest weaknesses to keep an eye on will be their shooting touch from behind the 3-point arc this season. Ime Udoka’s offense is predicated on ball movement and generating open looks, and if shooting production falters, Brad Stevens will have to target a reliable shooter and will swing one of his young wings in either Aaron Nesmith or Romeo Langford to bolster the Celtics roster ahead of the postseason.

Trading for a wing defender to strengthen the defense could also be in the cards as well.
5. JOHN ZANNIS: Ime Udoka will bench Jayson Tatum (once) for whining to refs.

This is going to be a rubber meets the road moment for Udoka early in his tenure as head coach. Not whining to the refs has been a huge point of emphasis of Ime’s since he was brought on board. But it’s one thing to yank Grant Williams out of a preseason game and another to do it to your team’s best player. As for Tatum, he is the WORST offender among all Celtics in this regard and old habits are hard to break. When Udoka says he wants the Celtics to quit their bitchin’ he’s talking specifically to and about Tatum without calling him out by name.

I believe Jayson will try to keep his cool more this season but leopard, spots and all that. When it happens Udoka will have no choice but to sit Tatum’s pouting posterior on the pine, even if it’s only for a short stretch of time, or else he loses all credibility on the matter.

6. BLAKELY: Ime Udoka will not pick up a technical foul all season.
As John said, Ime wants his players to lay off the refs. We know he’s intense in both his words and his actions, but he’s smart enough and composed to not cross that line. If he’s gonna be on his players about not woofin’ at the refs he can’t very well be out there griping about calls himself.

7. TOSCANO: Celtics will finish as the 6th seed in the East….at best.

Womp, womppp. Who brought THIS guy to the party? I called the C’s spot in the standings last year, and I just don’t think it’s improved much one season later. Bucks, Nets, Heat are my top three. Then it can go a bunch of ways, and yes, the Celtics could finagle their way to 4th maybe… but they could also just as easily be looking at 8th – so let’s meet in the middle. I like the Hawks, I like the Bulls.. the Hornets were a ton of fun before injuries hit, I was a season early on my Pacers, and even the Knicks are kinda back. Philly? Who knows. Just don’t tell me the C’s are clearly ahead of this pack.

8. ZANNIS: Celtics will finish with a WORSE record than last season.
Agreeing with Jimmy on this one. Most of the Celtics conversation seems to revolve around how much better they’ll be than last season. Frankly, I’m not seeing it here LLoyd. For the past several seasons the Celtics have hemorrhaged high end talent without adequately replacing it. The talent deficit was particularly noticeable when Tatum or Brown were either absent or off the floor last season.
This year the team replaced Kemba Walker and Evan Fournier with Dennis Schroder and Josh Richardson. While Schroder’s impact might exceed Kemba’s simply based on his availability, Richardson is a BIG downgrade. The Celtics clearly lack a 3rd or 4th star or anyone on the roster besides the Jays that could even enter the All-Star conversation. Realistically the Celtics have a 1 and 1a and then a bunch of 4th, 5th and 6th options.
Add to that some legitimate Covid concerns on a team already dealing with a couple early cases, an imperfect vaccination record, and a laissez faire attitude toward containment and prevention and this could be an issue that rears its head again this season.

Entering his fourth season, fans are wondering if there’s another level to Jayson Tatum’s ascension to stardom, and most importantly, is he prepared to take a significant leap in 2021-22? This narrative extends beyond the city of Boston as Tatum, who set a new playoff-career high 50 points against Kevin Durant, James Harden, Kyrie Irving, and the Brooklyn Nets, last season, piqued NBA fans’ interest after seeing one of the league’s young premier scorers take down an Eastern Conference juggernaut.
More so, he did it without his All-Star counterpart in Jaylen Brown and on the big stage of a playoff showdown. Now, with his leadership coming into question ahead of the regular season, I predict Tatum shines under the pressure and turns in an MVP-caliber season.

It’s difficult to make these teams, as Tatum showed last year, in a league packed with talent. With more ball time, playmaking growth and another strong shooting year that he previewed in his lone preseason appearance, Brown could be in play among names like Paul George, Jimmy Butler, Khris Middleton and Tatum himself for one of the Third-Team wing spots. Zion Williamson could miss significant time this year, Kawhi Leonard will miss most if not all of the season and Julius Randle could come back to earth and allow Brown to approach the list with a bump in three-point efficiency, assists and free throw percentage. He also needs to stay healthy after a string of injuries last year.

11. ZANNIS: Jaylen Brown will surpass Jayson Tatum as unquestioned Alpha on the team.

Doubling down on Bobby’s take but this is the year Brown not only makes All-NBA but he’ll get MORE votes than Tatum and will surpass his ‘best buddy’ as the unquestioned Alpha on the team. Now I still expect Tatum to have a very strong season and be a late game go-to option because of his unique ability to get off contested looks.

But between the two, Brown is the one who continues to grow his game year over year while Tatum has somewhat plateaued (albeit it at a VERY high level) and even regressed in some areas. Brown meanwhile continues to be a more efficient overall scorer than Tatum and is arguably already better getting buckets at all 3 levels than his Celtics teammate. Brown will never be much of a playmaker (there Tatum has the slight edge) but he also has the ability – if he chooses – to be a ferocious lock down defender and put himself into a Kawhi Leonard stratosphere.

I’m on record as loving the Schroder signing. I think this team needed a little jolt from somebody on the outside. And Schroder is that jolt. He’s active, flashy, and can score in a multitude of ways quickly. He’s also got a lot to prove this year. I think it’s a matter of time before he’s either starting or playing more minutes than some people thought he would. I want him in the game when it matters and I want him getting under the opponents skin. I think he’s going to be a fan favorite. Say it with me now… Sthrewdehhh.

13. PAVON: Robert Williams won’t be himself till the second half of the season.

Lingering injuries and added muscle to his physique hindered Robert Williams’ preseason production but it’s all for the betterment of the team, for which they prefer the latter in lieu of short-term success. It’s going to take time for Timelord to adjust to his body and that’s best for everyone, including the 23-year-old standout with plenty of upside whose presence on both ends of the floor could be the difference between a first-round knockout and an appearance in the 2022 NBA Finals.

These Celtics don’t have a ton of shooting. Ime Udoka called shooting “at a premium” during the preseason, and will likely turn to double-big to space the floor. Meanwhile Payton Pritchard shot close to 50% from three years in Summer League and preseason, including 7-for-10 on deep threes in the three exhibitions this month. The Celtics have enough defensive personnel to assist a smaller point guard, and Pritchard is improving enough in that role as a change of pace guard that the case could emerge by late in the season to have him accentuate the Jays with his deep bombs.

Honestly, I don’t even know if this is bold prediction. I’d be more surprised if it didn’t happen. Two intense dudes that get under peoples’ skin and like to play through the whistle so to speak. Also factor in that the two will be competing for closing point guard minutes and possibly a starting spot before the season is out. Would be shocking if this tinder box didn’t ignite at some point.