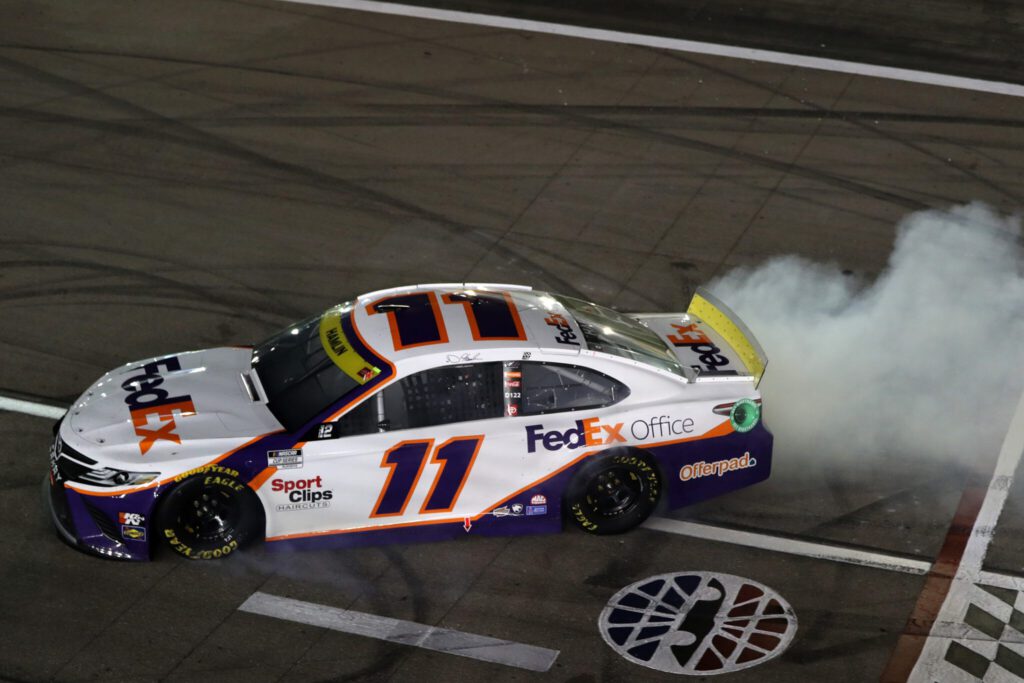 Denny Hamlin won the South Point 400 from Las Vegas Motor Speedway on Sunday night to lock himself into the next round of the Playoffs.

Hamlin was strong throughout the race and ran up front for most of the night.  After a different strategy call by the Hendrick Motorsports drivers towards the end of stage 2, Hamlin was able to take command and pick up his second win of the season.

Hamlin said he was glad to get to victory lane in Las Vegas after running well there the last few races at the track.

“It feels so good to win at Vegas,” Hamlin said.  “Last couple times I’ve been so close and just didn’t have the right breaks.”

The victory locked Hamlin into the third round of the Playoffs, which will allow him to avoid the stress of fighting for a Playoff spot at Talladega and the Charlotte Roval.

Hamlin said he is ready to fight for victories the next two weeks without the added stress of racing for his Playoff future.

“So happy I don’t have to worry about the next two weeks,” Hamlin said.  “I’m going to work just as hard each and every week to win.”

Chase Elliott was the lone Hendrick driver who was able to overcome the pit strategy call.  He was able to run Hamlin down over the final green flag run, but he ran out of time and was never able to challenge Hamlin for the lead.

Elliott said the race played out more in his favor than for his teammates.

“Circumstances went our way,” Elliott said.  “We were able to get back on the lead lap when that cycle of stops got weird there in the middle.  We got back on the lead and didn’t need to wave or get the lucky dog.”

“We were really close, just not close enough; Denny did a good job controlling the gap to me.  Excited for the next two, it’s going to be wild.”