While gearing up for the upcoming season, Derrick White did something over the summer that he's never done before 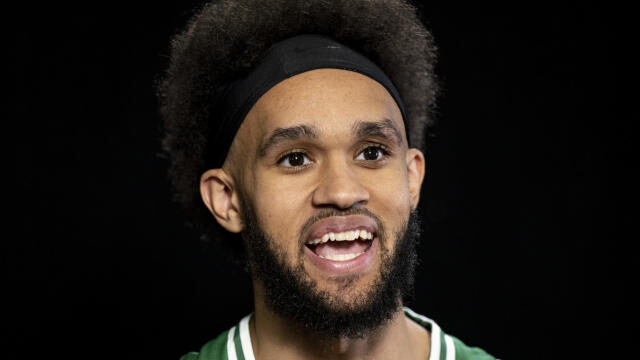 Entering his first training camp as a member of the Boston Celtics, veteran Derrick White re-adjusted his off-season workout routine ahead of the 2022-23 campaign.

White, who the San Antonio Spurs traded to the Celtics in exchange for guards Josh Richardson, Romeo Langford, and a 2022 first-round pick, says he spent the summer honing in on his physique and sharpening his shooting touch.

Instead of repeating his typical off-season workouts, White took things a step further in preparation for his sixth NBA season.

“I changed some things up,” White added. “I had a personal strength coach this summer, which I’ve never had in the past. So, just (working) on stuff like that.”

After averaging 14.4 points and 5.6 assists in 49 games for the Spurs, White struggled to find his footing offensively with the Celtics, as his numbers indicated a slight dip in both statistical categories. He recorded 8.5 points and 2.7 assists per in 23 playoff games, according to Basketball-Reference.com.

White’s signature postseason performance against the Golden State Warriors in Game 1 of the 2022 NBA Finals — where he scored 21 points on 6-of-11 attempts, including 5-of-8 from beyond the 3-point arc — was his best game as a member of the Celtics. But unfortunately, that’s not what we remember most about his stint in Boston thus far.

Instead, it’s his erratic scoring.

White netted a combined 19 points on 5-of-22 attempts in Games 4 through 6, resulting in three consecutive losses and forfeiting the championship. In all fairness, joining a new team on the verge of a deep postseason run isn’t always easy, and since arriving in Boston, things have been anything but typical for Derrick.

From being thrust into the Celtics’ thin second unit while tasked to be a primary weapon to him and his wife’s welcoming their first son Hendrix in the middle of an Eastern Conference Final series against the Miami Heat, White had a lot of adjusting to do.

The offseason addition of Malcolm Brogdon — another two-way guard expected to supplement the Celtics’ defense and scoring production — coupled with an improvement to White’s offense would significantly strengthen Boston’s backcourt this upcoming season.

White enjoyed competing at a high level and isn’t taking an opportunity to return to the Finals for granted. He’s excited to get back to work alongside his newfound teammates.

“It was cool to see how much the players were involved in everything, honestly,” White said. “Al (Horford), our leader/the heart and soul of our team to J.T. (Jayson Tatum), to (Marcus) Smart, J.B. (Jaylen Brown), everybody. Just having those guys come back for another year and just have that foundation that I was able to get last year will be big coming up to this next year.”

“Joe was a big part of the coaching staff last year, especially for me personally,” White added. “He was always talking to me about defensive assignments and defensive philosophies, and stuff like that. So, I think it’s just going to carry over.”