Jayson Tatum is playing on and off the ball, passing more than ever and communicating as he shows he can be the Celtics' floor general. Ime Udoka asked for a leader to emerge through turmoil like the MSG collapse. Tatum answered. 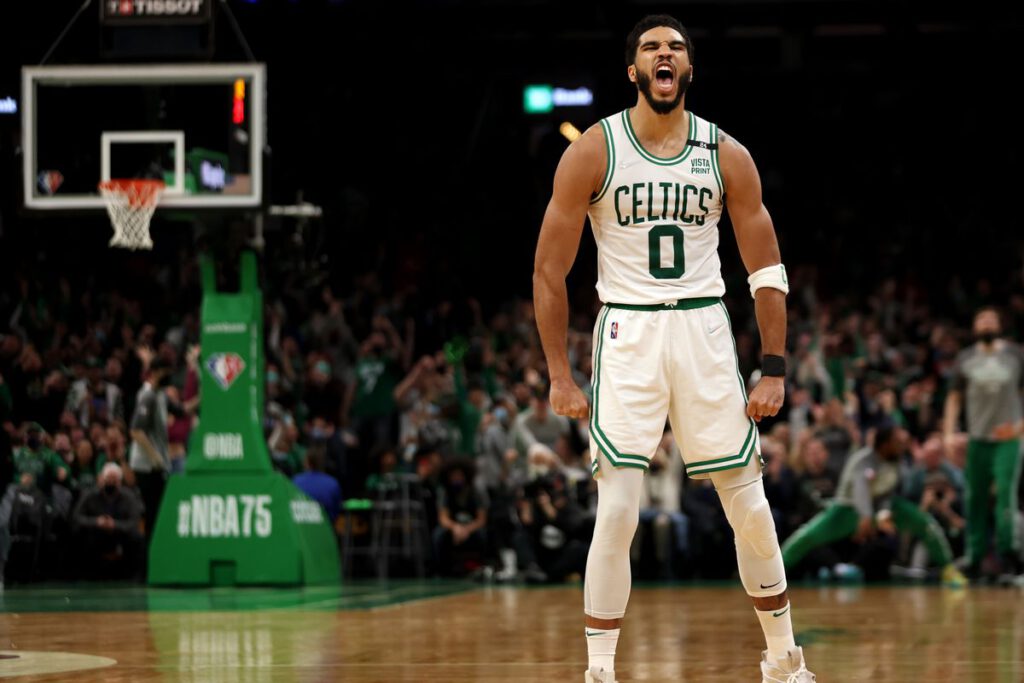 BOSTON — Jaylen Brown laid under the basket was the kind of visual that would’ve broken the 2021 version of the Celtics. Never mind them facing a 17-point deficit to the Atlanta Hawks in the immediate aftermath, Trae Young rising up from his own ankle injury to shoot 8-for-12 in the first half and helping to inflict 13 fouls on Boston. The Celtics trailed by 14 points at halftime, Brown (ankle sprain) ruled out for the game, Boston turnovers flowing into easy baskets and free throws for the Hawks on the way to a 37-point second quarter. The old Celtics returned.

But only for a moment. Boston stormed out of halftime on a 14-0 run to tie the game, held the Hawks to 13 points in the third quarter playing defense emblematic of what they have on their recent 19-of-25 winning streak. Young scored nine points on 3-for-11 shooting and Jayson Tatum took complete control of the offense, scoring 33 points with eight rebounds and seven assists on 12-of-25 shooting, not turning the ball over until late in the fourth and the Celtics won, 107-98.

Ime Udoka asked for a leader to step up when turmoil start snowballing against the Celtics shortly before this streak began. Tatum — looking more in control as a floor general than ever — answered the call. Tatum’s averaging 27.5 points, 7.8 rebounds and 5.2 assists per game with 2.4 turnovers on 47.8% shooting.

“We’ve seen it enough this year, and Brooklyn is really a game that stands out, where they’re just going after him,” Udoka said. “So we put our shooters and playmakers in position to feed off of him on the weak side. We just went to the post so it’s clean, and we had guys in the spots that we liked. We went to that late. He’s big enough, tall enough where he can make those plays. He has the height to see the passes and we had a guy slash, and they’d take the cutter and get Grant some wide-open threes. So he’s very capable, I said it earlier this year, he’s a triple-double guy, because he can make all the passes. So that’s the next step for him and our guys, knows the double-teams coming and can kind of pick it apart.”

Tatum’s journey toward leading the Celtics involved not just making crisper passes and cutting his turnovers down. His performance against Atlanta featured him chasing mismatches and positioning himself close enough to the basket to catch passes from teammates, firing passes back out to the perimeter and chipping away at the Hawks’ double-digit lead.

He made 49 passes in the win, above his average of 45.7 and on par with Steph Curry, Marcus Smart and Young’s per-game output. Tatum found Smart 15 times, Horford 11 and threw six passes to Williams, Payton Pritchard and Derrick White. His willingness to play off those same players proved as important.

Tatum turned one of his post touches playing off Smart into a kick-out to Horford for three, as the big man continues to dig out of a season-long 30% three-point shooting funk below his efficiency in recent seasons. Tatum threw an arm up in celebration of the bucket. Then, he bounced around a Horford screen to pull within two points on a free throw line jumper.

Players like Jimmy Butler prioritize constant touches and shots for teammates. Tatum’s sweet spot will be somewhere between that and the pure volume scoring of Tatum’s past, since Udoka noted he doesn’t want to completely transform his stars to take advantage of their unique scoring abilities and the benefits of their passing. Particularly, letting teammates gain rhythm and feel good.

After that, Tatum raced downhill past Danilo Gallinari, Kevin Huerter needing to foul behind him. Tatum’s downhill aggressiveness got the Celtics into the bonus less than four minutes into the third — and his free throws tied that game at 65 after Boston trailed by 14 points at the half. He scored eight straight points and took part in 13 of the 17 points on a 17-3 swing that put the Celtics ahead midway through the third.

White scored nine straight points to close the third quarter with a four-point lead with Tatum on the bench. When he returned, Tatum kept the activity going, finding Horford on an alley-oop, then down screening for Horford to hit a three in the right wing from Pritchard. Tatum screamed at Horford in excitement, as Horford subtly nodded back.

“Jayson’s been, for me personally, he’s been huge all year,” Horford said at practice on Wednesday. “Just in my ear, and giving me confidence constantly to be aggressive on offense. To keep shooting the ball through ups-and-downs for me, and he’s been that voice that’s been always encouraging me. For him, in a moment like that, I mean I was excited, but you could tell how excited he was and how much that fuels our team. It’s one of those things that he has taken a step forward in that regard. He is being more vocal, he’s letting us know what he’s thinking, h0w he’s feeling and for me, it gives me a lot of confidence to know he has my back. He’s really trying to win, he’s trying to do things that way … that was a huge momentum shift when that happened, seeing him that excited, that engaged. It’s a good sign for our group.”

The Hawks previously gave Boston fits with their mix of shooting, foul-hunting, versatile wings and spread offense that frees their pair of bigs for open lobs. Bogdan Bogdanovic and Young both hit the Celtics hard with offense over the last two games, building a pair of double-digit leads, but Tatum’s ability to challenge their smaller wings away from the ball put Atlanta in the vulnerable position. A matchup that once looked scary for Boston now looks like one the Hawks would want nothing to do with, even considering John Collin’s absence.

Tatum and Williams both allowed Smart and Robert Williams III to find them underneath in split actions. At one point, Williams III found Tatum against Young in the paint at the exact moment the Hawks decided to scramble switch, allowing Tatum to score completely uncontested. Those are some of the best sets Boston runs.

A defensive resurgence season for Tatum continued too, knocking Bogdanovic off the ball in the post and nearly forcing a turnover. Embracing the Young assignment when he drew that switch. Udoka also mentioned Tatum’s aggressiveness in throwing double teams at the ball when Boston’s defense got lost in switches, something all the more important with Brown missing and Aaron Nesmith and Pritchard called upon for extended minutes.

This writer wondered what the Celtics would look like if they lost even a single contributor in their defensive scheme. Boston stumbled momentarily, but Tatum, Horford and Williams III’s back line steadiness got the Celtics right back on their feet.

They led by eight points on a 41-19 run, before the Hawks threw a last-ditch double team at Tatum that he fired the ball over on a skip pass to Williams for a corner three. He went around his back to Williams on the next possession, piling three more points on the Celtics’ lead to go ahead by 14.

Williams had noticed him speaking up more in recent years, they had their spats and yelling matches, Tatum certainly sending a glance his way after Williams botched a full-court layup after a steal that turned into an easy Clint Capela basket the other way.

Spot mistakes for both aside, including two Tatum turnovers in the waning minutes that gave Atlanta final chance before Williams III’s put back slammed the door, the Tatum-Williams connections marked the definitive moments that broke the Hawks, as Udoka inserted Williams in place of Brown for crunch time.

It didn’t qualify as a “clutch” win for a group trying to prove itself in those moments after an 11-18 start in those close games late, but overall fourth quarter performance has flipped upside down for this group. As Udoka and Smart said early this year, that would always stem from Tatum’s growth as a passer.

“He’s just doing a great job of keeping his eyes up,” Williams said post-game. “No matter how aggressive he’s been, he’s also made the right play, and that’s something as a star player you hope for and pray for. He’s been growing with that as the years have gone on and I’ve seen it with my own eyes. So for me, just having the ability to knock those shots down, working on that craft and understanding what he needs from me. I remember during the game, I was like do you want me to cut there and make it so that Gallo maybe won’t double? And he said, no, you stay spaced and then the other guy will come from the back side and you’ll be ready to shoot. And I was like oh, a couple years ago it’d been hey cut, get to the dunker and do something else. So I think it’s just a trust between the two of us, and he trusts the rest of the team as well. He’s been a guy that, no matter who it is, he makes the right play and whether Smart, Payton, myself, J.B., whoever else hits the three, he celebrates it and is happy just as much as if he would. So tremendous respect to him and tremendous praise to guy that has grown over the past five years.”