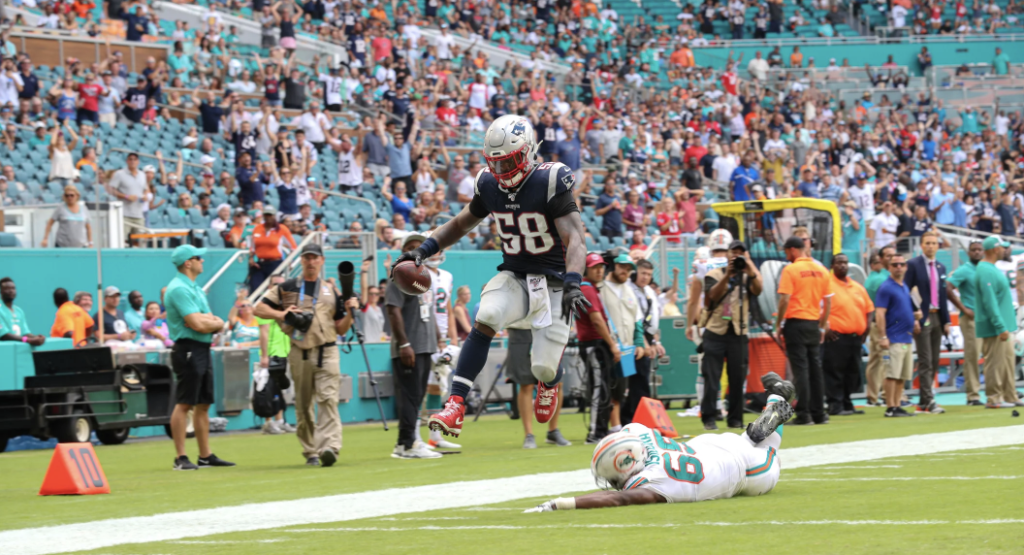 You can go home again, and Jamie Collins has found a new football life in a place where he once looked lost.

It’s time to start appreciating Collins for what he is – a once-in-a-generation type of beast on defense capable of making game-changing plays and proving a disruptive force all over the field. He certainly was that on Sunday, intercepting two passes (one for a pick-6), hitting the quarterback twice (0.5 sack), two passes defended and five tackles in a 43-0 shellacking of the Dolphins in Miami.

The question many Patriots fans are asking is what changed? Why is Collins so much better this time around?

The fact of the matter is, as Bill Belichick noted Monday, Collins has always been this talented and instinctive. What might be different this time around is how the defense is playing around him and how much depth there is all around.

“Jamie’s a very special player. He’s very smart, instinctive,” Belichick told me. “He’s got a great nose for the ball in the passing game and in the running game. He’s got the physical skills to play at the end of the line and off the line, to blitz, to play in coverage, play against the run and play against the pass. So we’re able to do different things with him and he’s been productive and effective in all of them. So it’s really exciting to have that type of player in your system, and to have players he can work with.

“They can do things that maybe you don’t normally or aren’t able to do because of some type of limitations, but he’s very smart and he understands things, and he a lot of times will recognize things before I do, and say “Hey, can I do this in this situation,” or “Hey, can I do this in that situation?” That’s the kind of football thinker he is, so he’s brought a lot to us defensively in a lot of different areas. From first down to third down, to playing on the punt team, he’s added a lot to us.”

When Belichick talks about how “really exciting” it is to have a certain player he’s usually excited because it’s a defensive player who can destroy an opposing game plan.

Listening to Belichick talk about Collins Monday, you couldn’t help but think back to the one player in Belichick’s past that he gave this similar freedom. Lawrence Taylor brought to the Giants defense many of the same qualities that Collins brings. He often played outside the structure simply because he could not only read and react but had a God-given athleticism that few in the NFL possess.

The difference between Collins and Taylor, of course, is longevity and consistency. Taylor was a first-ballot hall of fame linebacker who re-defined the position and the art of “freelancing” among defensive playmakers. Collins has shown glimpses of this type of play but not remotely close to the consistency. If he does, this season has the potential – statistically – to challenge the 1976 Steelers and the 1985 Bears as the most dominant the league has ever seen.

The Patriots have allowed 3 points in the first eight quarters. Yes, I know the first game was against a broken down Ben Roethlisberger without many weapons and a Dolphins team with Ryan Fitzpatrick that will be lucky to win a game. But when you allow 87 yards and four first downs in the first half in Game 1 and 51 yards and two first downs in Game 2, you’re looking at historic possibilities, possibilities that should continue in Week 3 against Trevor Siemian and the Jets at Gillette.

For whatever reasons (attitude, playing style, money, draft capital or all of the above), the second-round pick in 2013 out of Southern Miss and the Patriots parted ways at the 2016 trade deadline, and was shipped off to Cleveland.

The criticism of Collins when he was traded was that he was too much of a “freelancer”, taking unnecessary risks and exposing the Patriots defense to big plays when playing outside of the basic principles of a particular defensive call. Collins was also about to get paid.

He went to Cleveland, made a name for himself and even signed a four-year, $50 million with the the Browns after the ’16 season. It didn’t go well. As part of the 0-16 Browns season in ’17, Collins played under defensive coordinator Gregg Williams suffered a torn MCL and looked out of place and was graded out at a 35.9 by Pro Football Focus.

In 2018, Collins experienced a bit of a renaissance, recording 104 tackles, four sacks, a forced fumble, and an interception while starting all 16 games. He had a season-high 12 tackles, including a sack, in a 12–9 win over the Ravens. He recorded an interception in a 26–23 loss over Tampa Bay. He forced a fumble in an 33-18 loss to the Steelers. Pro Football Focus gave him a much-improved but still relatively average 62.3 overall grade for the season.

He was signed this year to a one-year, $2 million contract with the Patriots, the best money the Patriots have spent so far in the offseason. This season, it’s not so much the numbers but the activity at the line of scrimmage that jump out and make it clear that this Patriots defense is now ready to take that next step.

“Jamie’s always been a versatile player,” Belichick continued. “I mean, of course his first year or maybe into the second year – as any young player making the adjustment into the National Football League in our system, there was – now that he has the experience, and he’s able to utilize his experience and blend it in with his teammates and calls and situations, he has a ton of versatility.”

Experts like Matt Chatham and our Evan Lazar will point out that Collins really hasn’t changed but rather it’s the team around him that is ready to embrace what he brings to the table. Collins does still take chances but it was clear from what Belichick said Monday that Collins has issued a special and rare license to Collins that he doesn’t often hand out.

What’s special about Jamie Collins is his rare athleticism for an OLB—allows him to take chances in spots that are outside basic rules of the D, make big-time plays. Similar to what Junior Seau used to do. Most LB/DEs couldnt get away w/ taking this chance on the edge. 58 thrives pic.twitter.com/DffH5rLdWL

Forget the two interceptions and pick-6 for a moment. To appreciate Collins’ playmaking ability look at what he did at the line of scrimmage early in the game. He perfectly read Jakeem Grant’s run on the jet sweep pre-snap, crashing through the tight end to make the tackle for a four-yard loss on the first drive of the game. Then later, he blew up the pulling center, forcing Kenyan Drake inside for a minimal gain. Those are two subtle examples of how dynamic a force Collins can be on this defense.

Jamie Collins was excellent yesterday. Made several plays on the ball but he absolutely destroys the pulling center here. Forces the RB to bounce outside instead of following the puller. #Patriots pic.twitter.com/AeAyF0pmkh

Dating back to the Monsters of the Midway Bears and the 60s Packers, playmakers are truly what elevate defenses to the next level – that level where they are forever a part of the NFL pantheon.

From Dick Butkus and Ray Nitschke to Joe Greene, Jack Lambert and the Steel Curtain of the 70s Steelers to Randy White, Harvey Martin and Ed “Too Tall” Jones of the Doomsday Cowboys, great teams are often defined by their defense.

The Patriots have been defined – and rightly so – by the image, leadership and clutch performances of Tom Brady over their 20-year dominance of the NFL.

But even after acquiring Antonio Brown to pump up the offense, what was clear Sunday is just how suffocating this defense is going to be if Jamie Collins continues to destroy opposing offenses.