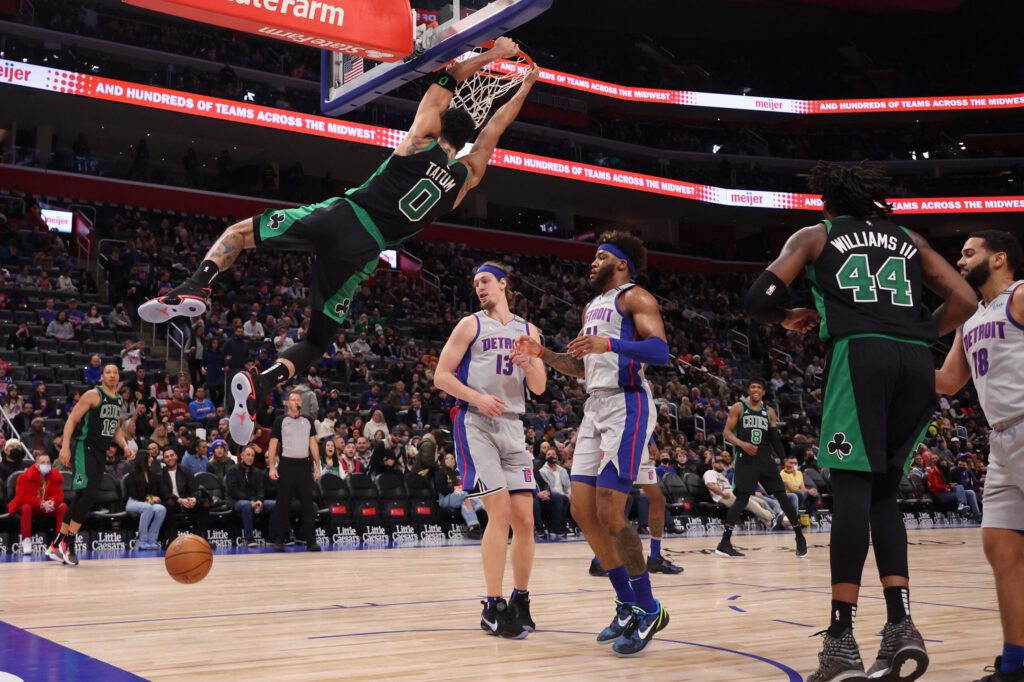 Jayson Tatum got awarded his third consecutive all-star berth this week, which hardly came as a surprise. Despite a down scoring and efficiency season for the star at the center of the Celtics’ inconsistency, Tatum’s fan voting rivaled any other star’s, his volume scoring stood atop the NBA and his reputation among NBA coaches remained strong. Brad Stevens once remarked his all-star voting largely dictated who scared him, or commanded inordinate game planning to stop. Tatum fits.

“What I said to him and to our team is, winning affects a lot of things,” Ime Udoka said, reacting to Tatum’s berth and Jaylen Brown’s snub. “Record wise, we could be better and that would have helped (Brown)’s cause.”

Tatum would score more unevenly on Udoka’s litmus test than Stevens’. Teams pile bodies in the box, drop their defenders and blitz Tatum constantly, an indisputable center of opposing game plans. Every night presents a new defensive look for him, Tatum still adept at torching single coverage against most defenders, while physicality and crowds arounds the paint have derailed his efforts. It’s why Udoka has stressed his ability to get off the ball, and trust his teammates to either score or get it back to him. The results set the table for which Celtics team we watch.

“We all know everybody’s game-plan, like I said before,” Marcus Smart said this week. “The game plan that everybody has is to make the Jays pass the ball. They have to do a good job at it, and they’ve been doing a phenomenal job at it.”

Tatum has dished seven or more assists in four of his last eight games, including an unselfish effort against the Hornets that marked Boston’s most complete win all year against a fourth-quarter push by the Hornets. On Friday, Tatum shot 9-for-21 in Detroit, overcoming a 2-for-9 start with a 19-point, efficient third quarter that proved enough to slide by one of the worst teams in the NBA. He finished with one assist and two turnovers, again leaning into his jump shot during a year where he’s rarely had it.

Even Tatum’s free throw percentage (84.4%) is down 2.4 percentage points from last season, while his efficiency from three is nowhere near his career standard of 38.2%. Defenses have been able to more comfortably pack the paint, play drop or crowd the paint. Tatum pointed to his 0-for-20 drought last month as a reason he won’t participate in the three-point contest at this month’s all star weekend in Cleveland.

With a step-back and spot-up not benefiting him the way it did in the past, following a league-wide trend that’s either due to new fouling rule emphasizes, a new basketball, fatigue or a larger physique, Tatum is becoming accustomed with his new role as a driver.

Tatum needs to barrel downhill, face a mass of defenders, probably get fouled and sometimes receive no call, make split second decisions to find teammates who have hit threes to varying degrees and finish successfully inside at a high rate. Nearly every possession.

When he’s done those things — becoming only the second Celtic to shoot 13-for-13 on two-pointers in New Orleans against the Pelicans and overcoming a 1-for-7 night from deep against Charlotte with 5-of-9 two-point shooting, nine assists and six free throws — Boston has thrived.

He still takes a heavy dose of threes, sometimes the Celtics fall in love with them as a team, but it’s part of a mathematical balance all NBA teams need to strike to not lose the advantage of the extra point from deep. The numbers point toward Boston overall striking the right mix between twos and threes, despite some historic instances of the team going ice cold, like a 9.5% night from deep against the Clippers.

Tatum ranks 17th in total drives, between Donovan Mitchell and Derrick White, while he’s sixth in pull-up threes, converting 29.5% to rank ninth out of the top-10 volume shooters. At his summer camp last offseason, Tatum quipped that he’d drive more despite his personal love for step-back jumpers. He took a shot at the constant sentiment being shared more than the notion itself, which he’s buying into, but when the paint becomes a harder point to access he’s prone to settle and hasn’t converted well from mid-range either.

That’s led to disastrous losses, lately against the 76ers and Hawks, turnovers and a propensity for the Celtics’ offensive struggles to spill into their otherwise elite defense. When calls don’t go his way through the bumps-and-bruises, he’s become prone to technical fouls, including a chalk-tossing one against Charlotte that nearly cost the Celtics the win.

Onyeka Okongwu managed to completely control the paint a week ago during his bench minutes against Tatum’s staggered stints with the Boston second unit. Joel Embiid tortures the Celtics offense in his dropped position underneath the basket. Embiid’s advantage comes in something of his own zone, a style that killed him against the sharpshooting Celtics in 2020 and allows him to control the game now.

Normally, Tatum can leverage his way toward shot-blockers by utilizing Robert Williams III as leverage against any center who plays off him. Most are willing to gamble though, content that Tatum won’t make the pass. He’s asserted Williams III’s importance to the team in recent weeks, and should trust him with dump-offs to make the right play. Even when he doesn’t make that pass, drawing the crowd allows Williams III put-backs.

“It felt more like beginning of the year than what we’ve been doing lately,” Udoka said about last week’s loss in Atlanta. “When somethings working, let’s stick with it. We’ve improved in certain areas, and don’t deviate from that. Last night, it felt like, at times, our spacing was poor. We went back and looked at that, our pace wasn’t what it had been the last five or so games, which really helped us in the offensive rankings. So, you look at New Orleans, the kick aheads and ball movement, we want to get back to that … against Sacramento, our 18 kick-aheads and cross court passes were a season high, and we had guys in front of us that we didn’t throw it up to, or the guys were up ahead didn’t run to corners, so our spacing was kind of bogged down, with guys stopping at the break and showing a crowd. So we didn’t have the driving angles that we did in previous games … Marcus pushed it extremely well, others didn’t as much.”

That’s what Brown and Tatum have adapted to this year in taking complete control of the Celtics offense. They need to do their jobs possession-to-possession, quarter-to-quarter, game-to-game, with only Smart, and occasionally Williams III and Al Horford, to lean on for secondary playmaking.

Sometimes, the right move is to let a teammate take pressure off them, but when the ball is in their hands they’re learning how difficult creating quality offense every possession is. They’re still on the ground floor as playmakers in many ways, trying to grasp the consistency needed to establish the Celtics as a reliable offense.

It’s the basis of much of this team’s streakiness, with flashes of brilliance and catastrophic failures. Boston knows seeing it through might be the franchise’s only hope of making this core work.

“By doing that, it’s just going to open the floor for them down the stretch,” Smart said. “Where it’s time to take over, and it makes it hard for defenses to load up when you have guys shooting the ball, making shots, and making the right play.”