Should the Celtics Stop Shooting So Many Threes?

It's a complicated balance to strike, but it feels like the Celtics should stop shooting so many threes to find a sweet spot on offense. 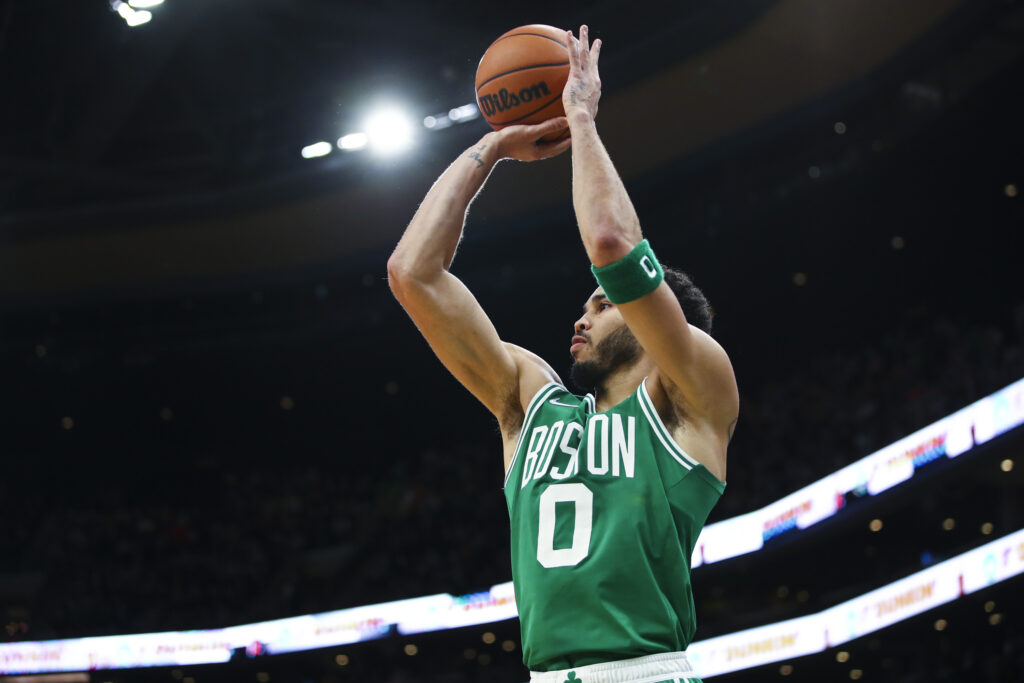 BOSTON, MA - JANUARY 19: Jayson Tatum #0 of the Boston Celtics shoots the ball during a game against the Charlotte Hornets at TD Garden on January 19, 2022 in Boston, Massachusetts. NOTE TO USER: User expressly acknowledges and agrees that, by downloading and or using this photograph, User is consenting to the terms and conditions of the Getty Images License Agreement. (Photo by Adam Glanzman/Getty Images)
Share
Facebook Twitter Email

BOSTON — The Celtics found something offensively, turnovers aside, edging out the Hornets through 18 minutes. Al Horford commanded the high post, Jayson Tatum attacked the weak Charlotte interior, then Romeo Langford and Josh Richardson checked in with cutting.

Boston led 43-41, Horford and Payton Pritchard creating quality looks from deep for Jaylen Brown and Langford, capping a 5-for-5 stretch. And the Celtics fell in love with the three.

Nine of the team’s final 11 shots in the second quarter came from behind the arc, only converting one. They kept launching into the second half, the stretch settling at 1-for-13 with the Celtics trailing 72-58 in a game they’d go on to lose 101-92. Tatum shot 0-for-7 from deep, now the worst shooter in the east at his volume, and Boston ranks 23rd in the NBA, shooting 33.8% on threes. They attempt the 13th-most per game, 14th in frequency, and took 46 threes out of their 90 shots in the loss.

Their shooting remains a hindrance on the Celtics’ goal of making Brown and Tatum better playmakers, them passing repeatedly into open looks and watching them clank. Horford, Richardson, Grant Williams and Dennis Schröder gave the pair solid outlets, occasionally, against Charlotte. The stretch where they didn’t sunk them. Boston’s shooting opened up late, though never for Tatum, who clanked two wide open practice shots in the corner, as well as an open kick-out from Horford’s offensive rebound, leading to a loss. It raised the obvious question: should the Celtics simply shoot fewer threes?

“It depends on look honestly,” Ime Udoka said. “(Tatum) knows the space and right shot to take. What he needs as far as that, and then it’s the feel. I loved what he did last game when the shot wasn’t falling and he got downhill, and attacked a little more, got to the free throw line, got to the basket. I think part of the foul trouble affected him overall, as well as some other guys. That’s why my message to the guys was what can we do to impact the game when the shot’s not falling and not let it affect us on the defensive end or offensively get hesitant.”

Udoka saw Charlotte show a crowd in the lane and even play some zone as they’ve done recently to deter dribble penetration. It left the Celtics swinging the ball across the perimeter, finding corner looks for Williams and Langford that the Hornets defense appreciated. The ball rarely entered the post, even for quick touches.

LaMelo Ball and others left their corner defensive positions to cut off Tatum and other’s dribble drives. When he caught the ball at an angle from Horford early, he commanded the baseline. The Celtics largely abandoned that cutting and secondary driving in the second half that had succeeded against the Bulls.

Charlotte might be as ill-equipped as any NBA team to protect the rim, Ball turned it over eight times and their bench features little size after Mason Plumlee checks out. Boston shot 8-for-11 around the restricted zone and 8-for-25 from three (32%) in the second half, and only Kelly Oubre Jr. finished with a negative +/- for the Hornets. The Celtics clearly settled, the numbers reflecting the season’s splits, Boston attempting the 11th-most shots from 25-29 feet and 24th out of 30 inside five feet.

They’ve scored fewer than 30 points or fewer in 66% of their quarters (~2/3) since their 145-point outburst in Portland to begin December. That rate has remained steady (35-of-52, 67% of non-OT quarters) since Christmas (67%). They’ve failed to reach 20 points numerous times, and have only hit 35+ twice, the max being 38 when they buried eight threes in the second quarter before they collapsed late in New York earlier this month.

The worst part? The Celtics finish 64.7% inside (9th) when they do get inside, boasting strong finishers like Tatum, Brown, Schröder, Marcus Smart, who’s been better there this season (58%), and the elite Robert Williams III (74.4%). Smart (conditioning) and Williams III (personal) missed Wednesday’s game.

Boston’s finishing ability flashed in their win over Chicago, where they split smaller defenders with the big men passing and wings cutting. The Celtics drove following kick-outs and hit 30 points in three of the four quarters while only taking 29 of their 87 shots from three. It’s a strategy that shines against smaller teams across the perimeter like Chicago, Udoka mentioning each defense calls for a different approach. It by far seems to be the style that suits the Celtics’ skillset best. Standing around the arc? Useless for this group.

Friday’s loss to the 76ers showed the danger of facing a rim protector like Joel Embiid who drops and takes away the lane. Seeing zone is scary for this offense too. Udoka has increased their free throws, Boston attempting 1.2% more per game than last year, while walking the line on their field goals, emphasizing that Brown and Tatum not dictate their playmaking on shots falling, urging shooters to remain confident and holding onto hope that some of their players will progress in line with their career three-point averages.

That hasn’t been the case. Horford has shot poorly all year, Williams’ success (41%) seems isolated to low volumes in the corner, Richardson (40%) has already given the team more than expected in his role, while Schröder ranks among the group’s best marksman (36%) — a scary sign. Boston ranks 28th on open triples.

“At times, I think (Tatum) relies on the shot,” Udoka said, Tatum now shooting 31.7% from three. “I mentioned, against Valanciunas last game, the first play of the game taking a contested three when he has a seven-footer switched on him. At times, just being in attack mode. I think with our team in general … we’re getting downhill and you have to remind them that the crowd’s coming, the help’s coming, so see your outlets.”

Brown jumped on the ball and found them late, Horford and Schröder converting their looks. The Celtics never found the secondary dribble drives or Horford low-post opportunities that aided the win over the Bulls.

The pace stagnated (now ranked 26th since early December), Udoka stressing less to how many possessions the team generates and how quickly they can progress their half court sets. At one point, Schröder almost drew an eight-second violation before Tatum got the ball for one of his few aggressive takes. Williams III missing the game removed 5.9 of their high-quality post attempts per game, replaced by four shots total around the rim by Horford, Enes Freedom and Williams. It’s no surprise the Celtics are reportedly searching for a center as an outlet.

Shooters seem necessary too, and it’s hard to imagine Brown and Tatum seeing through their progressions as passers without trust in their teammates. That’s what leads to one of this team’s less desirable traits, not as evident, Wednesday, of trying to do it all alone. Schröder can provide offense in that role, scoring 24 more points to cover the offensive patches and buoying the team’s percentage from deep with two late makes. He’s been excellent. If dumping Schröder and Juancho Hernángomez is all that’s in the cards for Brad Stevens this deadline, it’ll be disappointing, since this group is multiple moves away from contention.

Since Schröder doesn’t appear in the long-term plan for the group, Langford and Pritchard being subjected to 17 and 11 minutes, respectively — especially on a short-handed night that included foul trouble for Tatum and Williams — seemed counterproductive.

The two youngsters provided some of the team’s best penetration and activity, not to mention more dynamic play on the wing against an active Hornets team. Charlotte shot 41% on 39 threes in the win, Boston seeming to chase them with 46 of their own. Horford and Freedom started the second half playing together.

There’s precedent for scaling-back threes and succeeding. The Bulls have dominated the east while trying the fewest deep bombs in the NBA. The Nets, Suns and Grizzlies succeed on rim and mid-range looks too. No specific type of shot profile is perfectly correlated with winning today, Minnesota, Houston and Portland among the top three-point shooters by percentage of their overall attempts, alongside Utah, Golden State and Milwaukee.

Boston doesn’t have a straight path to increasing their rim looks, perhaps utilizing Williams III in the pick-and-roll more, creating more secondary drives from spots where shooters would simply unload and trying to get the ball back to Brown and Tatum for more of those secondary threes. The team already takes the 12th-most mid range looks between Tatum (37.4%), Schröder (37.7%), Richardson (42.3%) and Brown (47.5%).

That leads us to the personnel and the obvious need for an influx of shooting at the NBA Trade Deadline, if not to win, to at least take on the style they want to play. For now, this offense appears broken and exhausted.

“At times, (getting downhill) is the game plan against specific defenses,” Udoka said on Monday. “And it’s not just for them, it’s to draw that crowd and get open looks.”