The Celtics pulled off their first trade of deadline season, sending Juancho Hernángomez to the Spurs and receiving Bol Bol and P.J. Dozier. 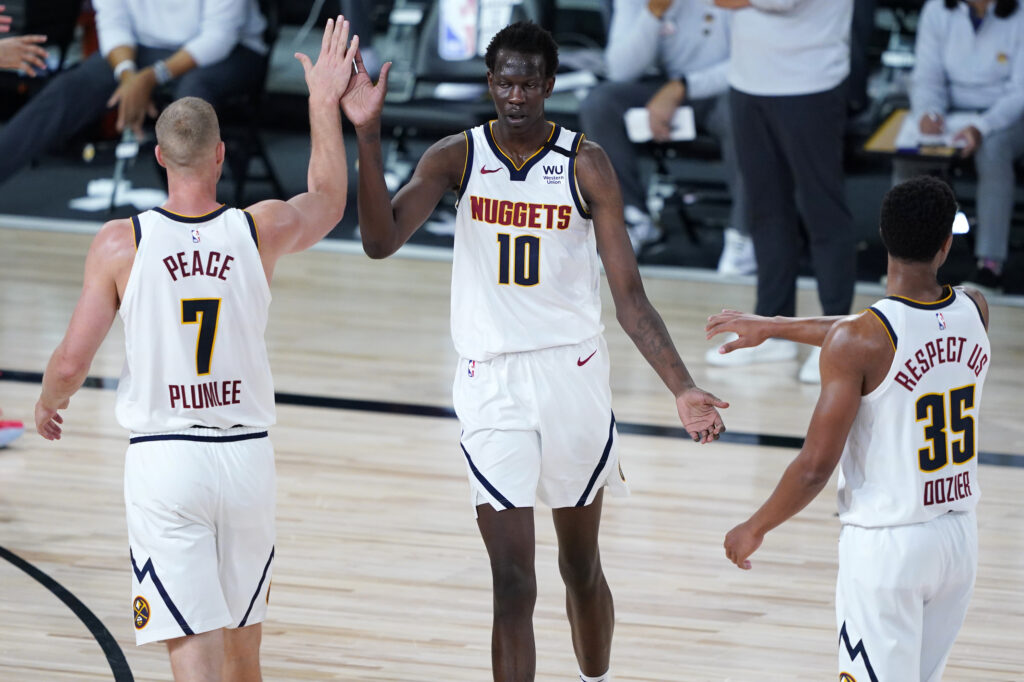 LAKE BUENA VISTA, FLORIDA - AUGUST 10: Bol Bol #10 of the Denver Nuggets is congratulated by PJ Dozier #35 and Mason Plumlee #7 during the second half against the Los Angeles Lakers at The Arena at ESPN Wide World Of Sports Complex on August 10, 2020 in Lake Buena Vista, Florida. NOTE TO USER: User expressly acknowledges and agrees that, by downloading and or using this photograph, User is consenting to the terms and conditions of the Getty Images License Agreement. (Photo by Ashley Landis-Pool/Getty Images)
Share
Facebook Twitter Email

UPDATE: The Celtics officially announced the trade on Wednesday afternoon, with the Boston Globe reporting the Celtics did in fact use the Kemba Walker TPE to acquire Bol Bol and P.J. Dozier. Boston will reportedly receive a $6.9-million TPE in the deal.

The Celtics swung a three-team deal with the Nuggets and Spurs late Tuesday night, according to Adrian Wojnarowski. Brad Stevens’ first in-season trade as Boston’s GM sent Juancho Hernángomez to the San Antonio, with Bol Bol and P.J. Dozier returning to the Celtics. Denver acquired Bryn Forbes from the Spurs in exchange for a 2028 second-round pick.

The motivation on the Celtics’ side is money. Swapping Hernángomez’ $7-million salary for Bol’s $2.2-million and Dozier’s $1.9-million slashes Boston’s luxury tax bill in half, not to mention saving the team from various reports of Hernángomez incentives that appeared likely to trigger. Now, combined with Jaylen Brown’s $1.9-million in incentives that are unlikely to happen (games played/ASG/playoff advances), the Celtics inch within one minor deal ($850,000) of clearing the luxury tax in 2021-22.

Boston started the day roughly $5.7-million over the tax, which would’ve come with a bill of over $8-million at the end of the season and triggering repeater penalty status one year earlier than the team would prefer to. Now, about $2.8-million over the line (before subtracting Brown’s $1.9M incentive), the Celtics have various options, that don’t need to include moving on from Dennis Schröder to clear the last million dollars.

One way would be re-routing Bol or Dozier, though Wojnarowski indicated the Celtics plan to hold on to both players for now.

Boston has no immediate plans to waive Dozier or Bol — certainly not before the trade deadline, per sources. Bol could return this season and both Bol and Dozier’s Bird Rights could be useful for Celtics:

The team could also move on from Bruno Fernando ($1.8-million), and already waived Jabari Parker to clear some of his non-guaranteed money from the tax bill ahead of his salary guarantee date earlier this month. Hernángomez’ salary was harder to move, without the ability to give a team cash to take him on. The Celtics will have an easier time doing so with Bol, Dozier, or Fernando.

Dozier, a former two-way player with the Celtics during the 2018-19 season, appearing in six games with the pro team that year, tore his ACL on Nov. 23. He’s out for the season and becomes an unrestricted free agent this offseason, though Boston can utilize his Bird Rights to retain him toward a return early next season.

Bol, traded to Detroit last week for Rodney McGruder and a second-round pick, failed his physical and returned to Denver. He underwent foot surgery and will miss 8-12 weeks, according to Shams Charania, meaning he’ll miss most, if not all of this regular season. A $2.7-million qualifying offer gives the Celtics the chance to make the 22-year-old a restricted free agent this summer.

“Bol, his representation, once that trade was rescinded because of the failed physical, they felt that it was in his best interest to have the surgery and to address why that physical was failed,” Denver coach Michael Malone said Tuesday. “And that’s the decision that him and his representatives made. I wish Bol a speedy recovery.”

Those two players make this an enticing deal. It’s not a strict salary dump, even though that’s the primary motivation. Bol, 7’2″ with spurts of ball-handling and shot-making, still carries some potential evident in the Pistons’ willingness to pursue him. He could become a low-cost development player for Boston between the pros and Maine. Payton Pritchard and Bol reunite from their lone season together in 2018-19 at Oregon.

“(Bol)’s an intriguing young player, as well as PJ, that could possibly join us in the next few months,” Ime Udoka said on Wednesday. “I’ve seen him quite a bit at Oregon, before he got hurt there, and playing with Payton…he’s a RFA, so we can retain his rights and get a good look at him.”

Dozier meshed with Denver’s second unit for three seasons as a versatile 6’6″ glue wing, though struggled to shoot.

The bad news: this does signal some apathy toward the luxury tax from ownership for a team thrust against the line. There was hope Hernángomez’ salary, alone or stacked with others on the roster, could be utilized to add to the team. That not materializing doesn’t rule out other ways for Boston to improve through even salary exchanges. It does likely necessitate the Celtics act with that restriction in mind.

That’s possible, with Al Horford, Marcus Smart, Josh Richardson, Schröder and more giving Stevens a variety of contract sizes to use as matching salary in nearly any deal. Brian Robb reported this week that the Celtics will explore the value of numerous players before this deadline, Woj drawing the line at Jayson Tatum, Jaylen Brown and Robert Williams III (hard enough to move anyway with his poison pill provision) on ESPN.

The point here is that the Celtics’ tax avoidance may have been more a product of opportunity than necessity. They helped facilitate a Forbes deal, essentially. The move(s) that follow through the Feb. 10 will paint a clearer picture on the team’s direction. Some directional clarity from Wyc Grousbeck and ownership would be helpful in the near future too. Seeing more players sold off and fliers acquired would indicate the team is taking a step back around the edges of the roster with an eye for the big picture.

“We have been (a taxpayer) and you’ll see it again,” Grousbeck said on 98.5 The Sports Hub last season. “We were going to be this year until the pandemic and everything else changed things. We’re a consistent taxpayer and would be in our mind, contenders. That’s how we want to run this team and we want to get back to that status as soon as we can.”

If there’s a talent acquisition, this would be looked back on as some bookkeeping. Boston, for what it’s worth, is among the teams Bleacher Report expects to make a run at Pistons forward Jerami Grant.

One more cap minutia, if you’re interested. The Kemba Walker trade exception fits both Bol and Dozier’s salaries, so the Celtics can absorb both into that TPE and create a $7-million Hernángomez TPE that would last until January, 2023.

Hernángomez heads to San Antonio having played only 18 games in Boston, shooting 18.5% from the field and never carving out any role. The Celtics traded Kris Dunn and Carsen Edwards to Memphis for the veteran forward late in the offseason.

A Spanish publication recently hinted Hernángomez could be Real Madrid-bound this summer. The Spurs can waive his fully non-guaranteed $6.6-million 2022-23 deal after this season.

The Celtics now have 15 healthy players, with Sam Hauser and Brodric Thomas likely to become constant presences in Boston with Bol and Dozier unavailable, beginning Wednesday against the Hornets. Smart (COVID) and Aaron Nesmith (ankle) are questionable. The team filled the roster spot emptied by Parker.

“It was tough. We’ve had conversations with (Hernángomez), as well as the other young guys who haven’t been playing as much,” Udoka said Wednesday. “Talked to them throughout the year about staying ready. I loved his approach, the work he continued to put in, and being professional and cheering on the guys. It’s a tough situation, one of the toughest as coaches, is finding minutes for everybody. Honestly, like I said about Payton, it was nothing he didn’t do. It was more so what Grant did do, early on shooting the ball and some of the defensive things. And then at times we’ve gone with smaller lineups with Romeo and some of those guys. Hopefully for him, it’s a better situation where we can have a better opportunity. We talked about it today as a team and we’ll wish him well moving forward.”