Dennis Schröder fairly defended his play after the Celtics beat the Pelicans, pouring in 39 points and 17 assists over Boston's last two wins. 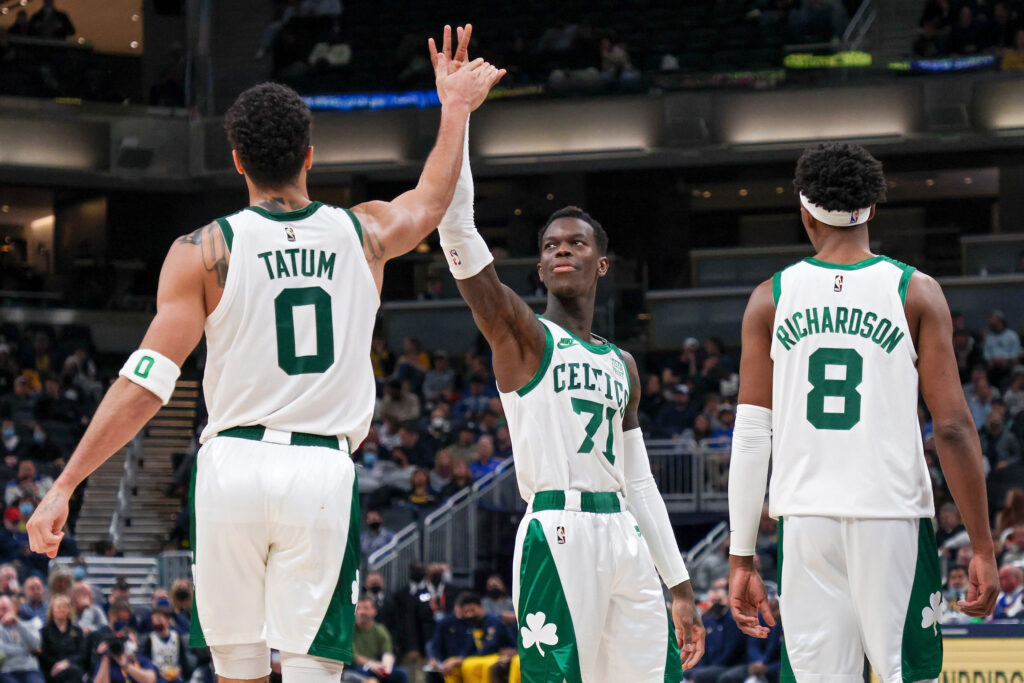 INDIANAPOLIS, INDIANA - JANUARY 12: Jayson Tatum #0 and h71 celebrate in the fourth quarter against the Indiana Pacers at Gainbridge Fieldhouse on January 12, 2022 in Indianapolis, Indiana. NOTE TO USER: User expressly acknowledges and agrees that, by downloading and or using this Photograph, user is consenting to the terms and conditions of the Getty Images License Agreement. (Photo by Dylan Buell/Getty Images)
Share
Facebook Twitter Email

Dennis Schröder received a question about his up-and-down play following the Celtics’ 104-92 win over the Pelicans on Martin Luther King Jr. Day. Schröder had just dropped 23 points with nine assists and two steals on 9-for-16 and keyed the go-ahead run into the fourth quarter alongside Jayson Tatum. Over his last nine games since returning from COVID-19, he averaged 14.4 PPG on 50% shooting.

He posted double-figure scoring six times over that stretch. Two other times, he at least recorded three assists. Friday’s one-point game, the odd one out, in a spot start against the 76ers became the focus of the question. Even though 39 points and 17 assists followed in the two games since, Boston winning 5-of-6 now. Schröder called the question stupid.

“We won, that’s all that matters,” Schröder said. “I’m a team player, so end of the day if I got 40 points or one point and win the game, Imma be happy with it. So end of the day, I’m a team play trying to win some games, and in Philly we didn’t come out right, we played terrible and that’s it.”

Whether frustrated with the question itself or the larger backdrop of trade rumors and his play falling under a microscope, it’s worth offering up a defense of Schröder relative to expectations this year. The veteran guard is averaging 15.9 PPG and 4.7 APG on 44% FG and 35% three-point shooting. For just short of $6-million, he’s filled in admirably through Marcus Smart’s recent absence and early-season struggles, bailed out an offense starving for points at times and added a new dimension by finishing at the rim over 60% of the time.

Remember, Tatum started the season ice cold too, and Payton Pritchard was unplayable.

Sure, Schröder has his moments, over-dribbling in traffic, waving off the occasional teammate or set, or taking difficult jump shots. His isolation tendencies aren’t abnormal relative to the Celtics though, attacking one-on-one 2.8 times per game, compared to 5.8 for Tatum and 1.9 for Jaylen Brown. Friday marked a low point in his season, shooting 0-for-6 and struggling defensively, but Brown and Tatum shot 14-for-35 and turned the ball over 12 times. As he noted, the game was a collective failure.

I’ve written that Schröder isn’t the solution at point guard and a trade could be warranted depending on what Boston could acquire. Stylistically, he reflects some of Boston’s worst habits. Brian Scalabrine’s point during Monday’s broadcast about the laser-fast player slowing down the pace in transition remains one of his baffling qualities. Schröder can’t reliably shoot, or space the floor, and that’s a fatal flaw for the offense. He rejects the 0.5-second rule Ime Udoka implemented in the offense, Udoka telling CLNS in November Schröder has more leeway to over-dribble given his scoring. They needed points badly.

You have to view Schröder’s performance through the lens of last offseason. The Celtics reportedly pursued Lonzo Ball and Patty Mills, unable to acquire either. They lacked cap space or trade flexibility. When they landed Schröder for the taxpayer MLE in August, avoiding the hard cap, lacking scoring after a following a quiet free agency period it felt like a miracle.

“I told (Dennis) that we needed him. That we really needed him,” Al Horford remembered telling his former and current teammate. “I told him that how he plays and the things that he’s about, I think that connects with the Celtics, with what this city is about. Dennis is a hard-nosed player, a competitor, and he’s going to give it his all. And I was really on him about that, just telling him that here, he was going to really be able to show what he could do.”

So much of the coverage and conversation regarding Schröder is tied to the future and cap sheets though, a gap between the way the media and players think, instead of the game or moment. The Celtics’ lack of Bird Rights and the potential difficulty they’ll have resigning him this offseason define him, which in turn stems from the narrative of Schröder dropping the bag. All that could be true, but let’s not forget the past in our assessment.

Schröder is here largely to replace Kemba Walker and has, so far, shot a higher percentage — within one percentage point of Walker’s 2020-21 three-point percentage (.360) — averaged roughly the same assists per game (4.9) and unlike Walker can play in a top-five defensive unit.

That’s all before we get to games played: Schröder appearing in 84.4% of the Celtics’ games, compared to 59.7% for Walker last season. The only areas where Schröder hasn’t been an upgrade are ball control and pick-and-roll passing, though Walker has continued to struggle and sit out games in New York.

“The pressure (Tatum) puts on the rim,” Ime Udoka said Monday. “When he was out, I think he saw Dennis and JB and some of those guys get downhill and he kind of followed suit there.”

Schröder’s status, mercenary, makes it easier to dump the deficiencies of the team onto him. Is he the solution? Again, no. Is he the problem? Far from it. He’s been an upgrade for a team that couldn’t easily acquire one.

Smart struggles to shoot at a far greater rate than Schröder, without the rim production (58.3% vs. 61.9% inside) to make up for it. He’s needed Schröder’s more efficient offensive game as a contrast to his facilitating style, and they’ve succeeded playing together (+4 net rating) outside of some recent crunch time minutes Udoka quickly pivoted away from in the games that followed. Tatum isolates often too, at a lower efficiency (0.90 vs. 0.93 PPP). The entire team seems to regress defensively when shots aren’t falling.

The defense isn’t exceptional from Schröder, the main culprit going under on Evan Fournier late during the 25-point collapse in New York. He’s scrappy and brings more size and quicker hands to the position than Walker did though, hardly a weak link teams can attack in Udoka’s switching scheme.

More importantly, his teammates seem to like him. Brown and Schröder regularly share jovial moments, without the spats over style Schröder shared with LeBron James last season. There’s certainly been some dysfunction in Boston, none we know related to Schröder.

It’s easy for many to imagine life without him, Brad Stevens even suggesting in his Athletic interview Pritchard should dig into some of his and Smart’s minutes for shooting purposes. Making Pritchard the full-time backup though? That’s a more uneasy proposition.

Pritchard’s shooting 32.8% in six NBA starts compared to Schröder’s 48.3% (23 games) this season. Pritchard could probably fill-in as the second unit point guard (43.1% career), though his occasional defensive issues, general shooting inconsistency this year and youth would open the door to even more inconsistency. If development becomes a theme of this season, I’m all for moving on from Schröder, recouping some assets and letting Pritchard fly.

If it’s about competing to the highest level still, Schröder unquestionably provides the better overall play night-to-night. Schröder may not help instill the style Boston wants to achieve though, benching him wouldn’t be easy, if necessary, and the big picture should start to dictate the Celtics’ approach in a year where they don’t have championship aspirations. The Schröder dissidents are right about that.

It’d also be difficult to lose Schröder for nothing after a solid season if another team wants him now. Here’s an underrated solution. Could they keep him?

Most teams have point guards they’re comfortable with. Many lack cap space, with few hard-capping themselves to make full mid level exception signings this year. The roughly $7-million per season Boston can offer Schröder, max, without hard-capping themselves may not resemble what Schröder reportedly once declined in LA. His role and comfort at this stage in his career matter too though. If he’s ok returning at that number, why shouldn’t a cap and talent-strapped Celtics team entertain that?

The chances of that happening, value-wise, balance evenly against the likely second round pick trading him would net Boston. It all depends on where Boston is going. That’s a question for next month.

For now, we’ve watched Schröder steal an overtime win over Milwaukee with 38 points. We’ve witnessed him spark the Celtics down six late on Friday against Chicago with a tough left-handed layup. We’ve come to expect him to help dig the team out of an offensive hole in the second half alongside Tatum on Monday, among other triumphant moments. We’ve seen him lift up a stagnant offensive unit repeatedly. We’ve watched the bad too, though less often than the good.