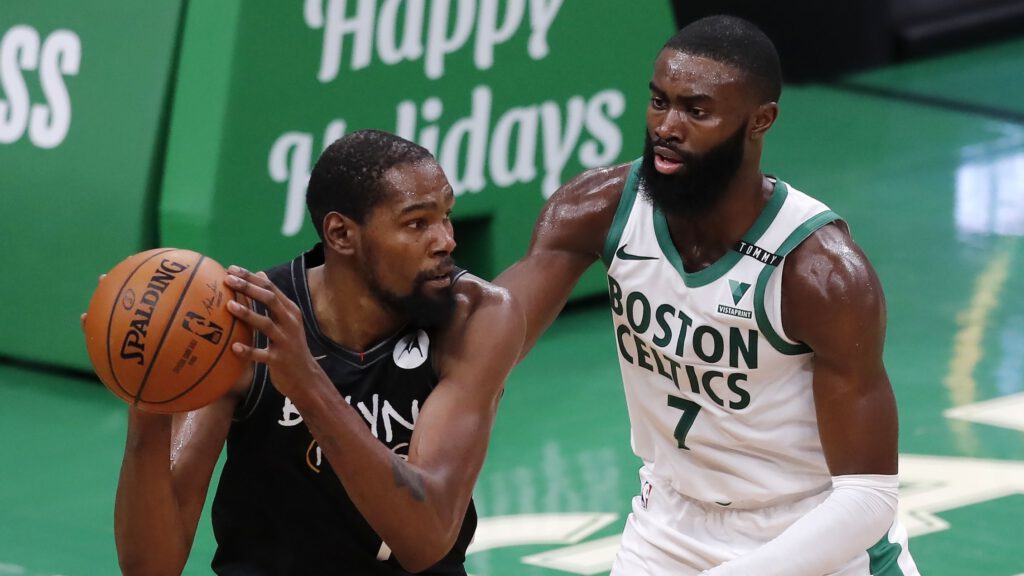 The Boston Celtics have emerged as a potential suitor to land Kevin Durant, which could be the best play for the Brooklyn Nets as they mull over their options in seeking the best return for their franchise cornerstone star.

Durant, who requested a trade on June 30, still hasn’t found a new home. According to The Athletic’s Shams Charania, Celtics president of basketball operations Brad Stevens offered a trade package centered around Jaylen Brown, Derrick White, and a future first-round pick — which was rejected by the Nets, per Shams.

“Brooklyn has asked Boston — in any proposal — to include Brown, Defensive Player of the Year Marcus Smart, draft picks, and potentially one more rotation player; those sources added,” per Charania. “Currently, the Celtics are less inclined to include Smart along with multiple other player assets or pick assets, but the franchise is mulling over next steps on how to approach discussions.”

Due to both sides agreeing on Brown as the centerpiece, the Celtics are a “serious possibility” for Durant and have a “tremendous interest in bringing him in,” Shams added. “Boston views him as a piece that can take them over that final hurdle.”

According to Shams, Marcus Smart — who was in a counter offer, in addition to Brown, by the Nets — could have been one of many reasons why both teams balked before getting into serious discussions. Unlike Durant, Jaylen hasn’t requested a trade, but Brown’s looming free agency in 2024 is worth Stevens’ consideration, given that Durant has four years remaining on his contract.

An opportunity to land one of the greatest scorers ever doesn’t come along often, and if Brown were to leave the Celtics for greener pastures in a couple of years, not trading for KD — in retrospect — would sting.

Sources: The Boston Celtics have offered a Jaylen Brown package to the Nets for Kevin Durant, which Brooklyn turned down and countered.

Full details on a potential Celtics-Nets mega-deal to be had, latest on Donovan Mitchell and more at the Inside Pass: https://t.co/Gkyfkhg5A1

Conversely, Boston was two wins from a championship last month, and they’re considered favorites to win it all in 2023 with the offseason additions of Malcolm Brogdon and Danilo Gallinari. Why rock the boat and not see things through?

An anonymous NBA source tells CLNS Media this is an offer the Celtics didn’t make over the weekend. However, in doing its due diligence, Boston should always consider trading for a top-tier talent such as Durant.

“If I were Boston, I would just leave it alone and let that team grow,” the NBA source said. “They look good already this year. But, I mean, what team in the league wouldn’t want to look into getting Kevin Durant? You’d be absolutely moronic not to look into it.”

The Miami Heat also put in their bid. For a team that was possibly one 3-pointer-at-the-end of Game 7 away from eliminating the Celtics in the Eastern Conference finals and making two NBA Finals appearances in three years, Durant could be the solution to the Heat’s championship aspirations.

But, things got complicated at the trading table. Due to the NBA rule that disallows organizations to have more than one player on a maximum rookie-contract extension, Bam Adebayo and Ben Simmons cannot play for the same team.

“Talks between the Heat and Nets only stalled because of Bam Adebayo,” the NBA source tells CLNS Media. “Miami didn’t want to give up its star center without getting one in return. The Heat even entertained the thought of bringing in Ben Simmons, you know, getting a third team involved to make the Durant trade work. They don’t want to lose Bam without getting a valuable center in return.”

In Brown, the Celtics have undoubtedly set the bar. Stevens currently holds possibly the best centerpiece in contrast to any other trade packages for Durant. Perhaps, this is the best solution for all parties involved.

But how far are the Celtics willing to go? How many sweeteners would Brad realistically have to add to land Durant, and could a significant piece such as the association’s reigning Defensive Player of the Year still be in play?

For those worried about Durant, who was recently named one of the 75 greatest NBA players of all time, and his social media activity and overall temperament possibly disrupting the Celtics’ continuity, this anonymous source vows that will not be the case if KD were to ship up to Boston ultimately.

“I know Durant. I mean, I’m not best friends with him,” the NBA source added. “But I’ve spoken to him on several occasions, and I’ve talked to friends of his; he’s a really good guy. He doesn’t have a reputation for causing problems.”

For Durant, a four-year window to compete alongside All-NBA First Team star Jayson Tatum is an ideal way of pursuing a championship. At the same time, Brown, Kyrie Irving, and Ben Simmons will potentially have one year to build a new foundation in Brooklyn. Jaylen, who will be eager to prove to everyone that he, too, can guide a franchise to champion contention, will get his shot at demonstrating why he’s a legitimate No. 1 option if he’s traded to the Nets.

But, what will be Stevens’ final offer? Is he still thinking it over, or has he already walked away from the table, suffice to say, he’s gone as far as he’s willing to go?

Or, maybe this is just the very beginning.