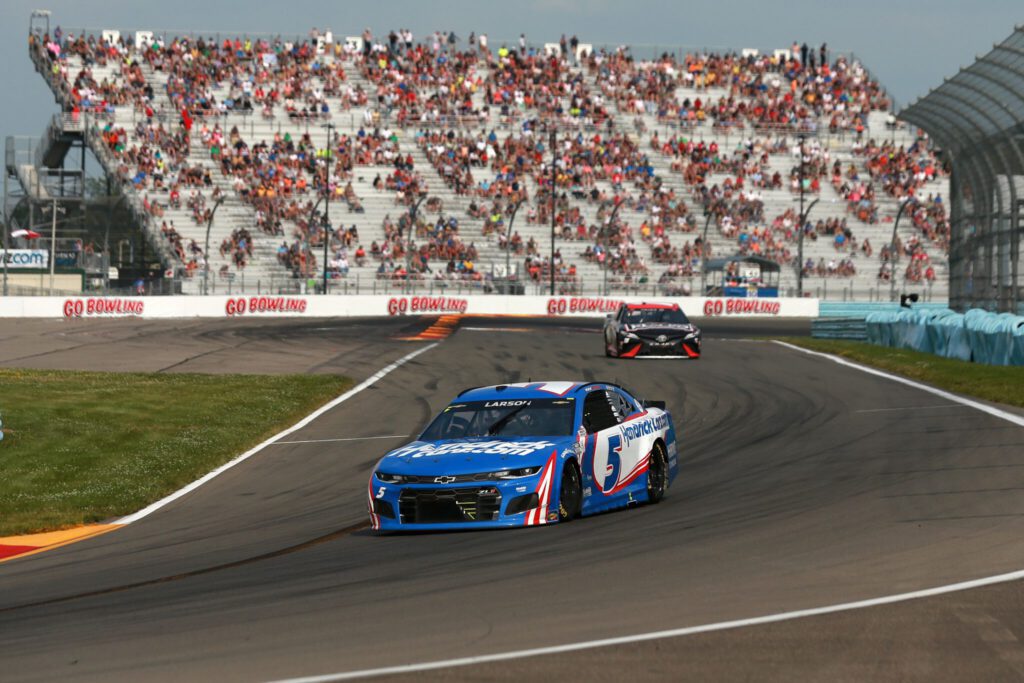 Kyle Larson won the Go Bowling at the Glen from Watkins Glen International on Sunday afternoon to pick up his fifth victory of the season.

In the first race out of NASCAR’s Olympic break, Larson ran up front and challenged for the lead most of the day.  Larson was able to get around Martin Truex Jr. for the lead under the final round of pit stops, and he pulled out to a lead that his teammate Chase Elliott could not overcome.

Larson said his team put a good car together for the weekend.

“Another amazing car,” Larson said.  “I could tell from about lap three after I stopped making a bunch of mistakes that we were going to have a car that could win today.”

With Elliott closing in on Larson in the closing laps, Larson ran into a pack of slower cars that allowed Elliott to cut seconds off the lead.

Larson said he was sure Elliott would catch him while stuck in traffic.

“Chase was already chasing me pretty quick, even with me being on open track,” Larson said.  “When I caught those four cars…thought I’d look in my mirror and the 9 would be right on me.  Think we had a comfortable enough gap to where I could make a mistake like that.”

Elliott was forced to start at the back of the field because of a pre-race penalty, but he was able to race his way up to second place.

NASCAR’s winningest-active road course racer drove his way through the field, but a late mistake cost him what could have been his seventh-career road course victory.

Elliott made an unscheduled stop after flat-spotting his tires, and it was too much to overcome in such a short race.

Elliott said he was proud of his team’s effort throughout the day.

“I made too many mistakes to get the win, unfortunately,” Elliott said.  “Super proud of our team, kind of an uphill battle all day.  Everybody was super prepared coming into today, and our NAPA team just did a good job of fighting.”

“Try to clean some things up and make less mistakes next time, maybe it’ll work out.”