Coach K and Duke fall to the Tar Heels in the ultimate rivalry statement as North Carolina advances to take on Kansas in the title game. 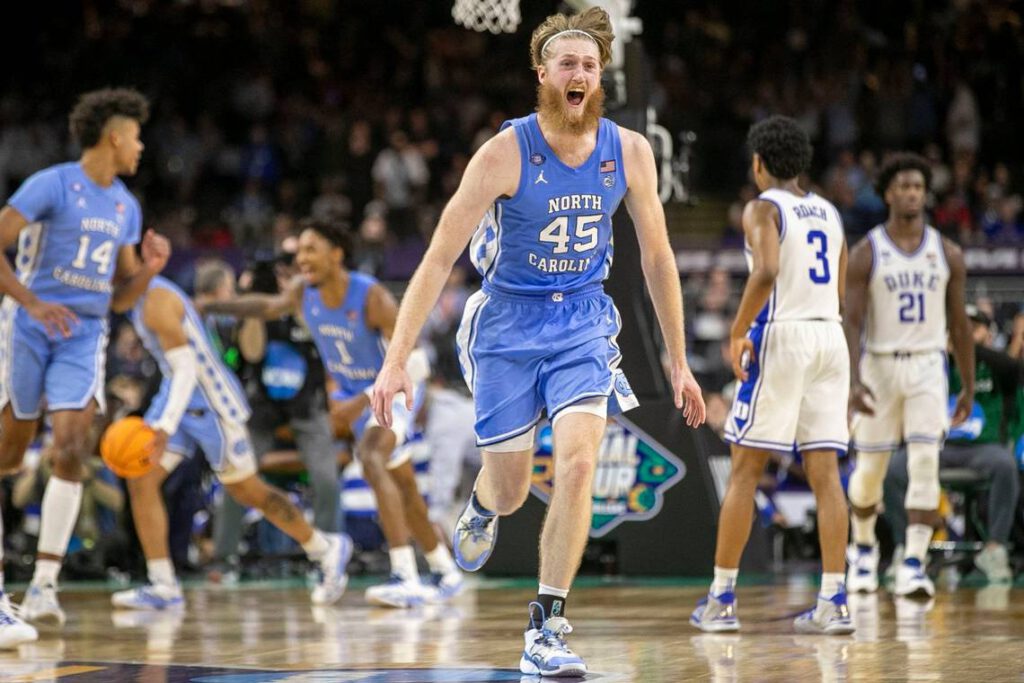 UNC was able to upset Duke in the two most important games of the season. The Tarheels handed Coach K a loss in his final home game at Cameron Indoor Stadium. Caleb Love was able to hit a dagger 3 with less than 25 seconds remaining to knock Coach K out of his final NCAA tournament.

A game that was hyped up as soon as we saw the match-up, Duke and North Carolina did not disappoint. The greatest rivalry in all of college basketball got to meet for the first time in the NCAA tournament. It just so happened to be in the final four. It also featured a legendary coach’s final run for a national championship.

Both teams came out the gates slow as it appeared the nerves might have got to some of the players. North Carolina was able to take a lead 16-15 with 10 minutes left in the first half. Both teams finally settled in after the shaky start. Duke player Jeremy Roach got the and-1 to finish out the half with a 37-34 lead for the Blue Devils.

The scoring took off in the second half as it became clear that we were gonna be in for a treat. The teams traded the lead back and forth with nobody being able to control the game comfortably. Armando Bacot for UNC dominated the boards finishing with 11 points and 22 rebounds for the game before fouling out late in the action. It did not matter as Caleb Love proved to be the best player on the court.

Love played for all 40 minutes of the game and would not be stopped down the stretch. Play after play was made including that electric 3 pointer that sent a shiver down the spine of all Blue Devil fans watching. Add in some clutch free throws to cap off an epic 28 point performance as the Tar Heels roll on to the championship.

Coach K will finish his career with a 50-48 all time record against his rivals. That will not matter in the eyes of the Tar Heel faithful. North Carolina was able to hand him his first loss in NCAA history as head coach of Duke. UNC defeated Coach K in his final home game at Cameron Indoor Stadium. The Tar Heels finished the job in handing Mike Krzyzewski his final defeat as the head coach of the Duke Blue Devils. The ultimate rivalry hater move has been complete.

There was another game that was played earlier in the day to see who would be the other half of the national championship game. Kansas finally woke up from the 3 point line as they dominated Villanova in a 81-65 victory.

Kansas forward David McCormack dominated down low finishing with 9 rebounds and 25 points. Every time it looked like Villanova was going to make it a close game the Jayhawks would respond. The other star player of the night was Naismith award finalist Ochai Agbaji. He has been relatively quite this tournament so far. Not tonight as he finished with 21 points and nailing 6 of 7 three pointers.

The Kansas Jayhawks will look to win their second national championship under coach Bill Self. The Tar Heels and the Jayhawks will meet on Monday night to see who will walk out as the best team in college basketball.