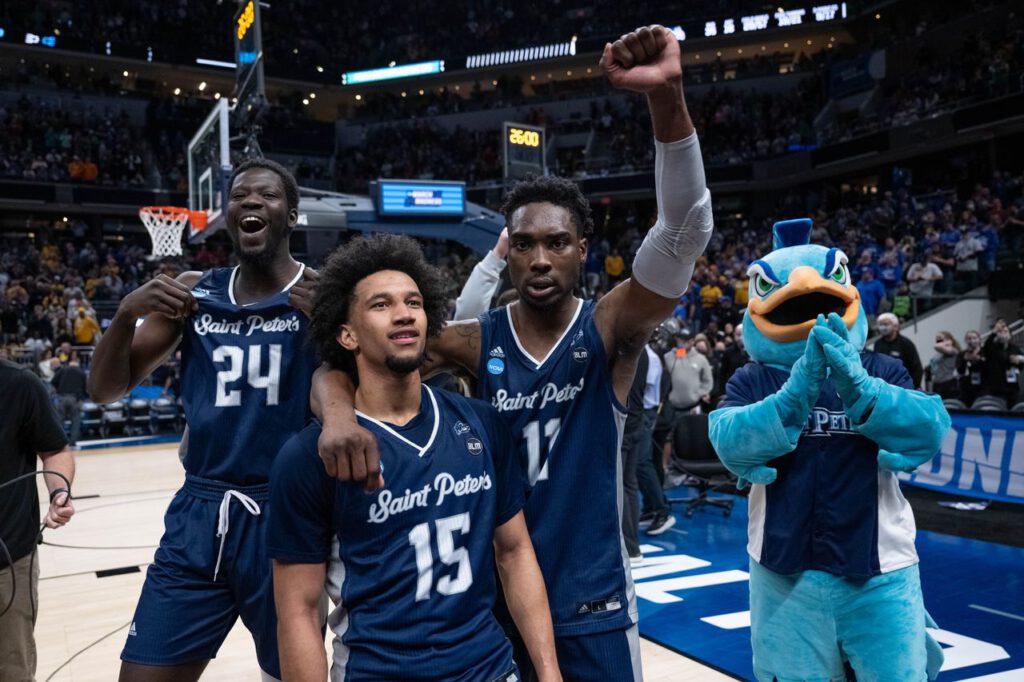 The Providence Friars dream season has come to an end, following a sweet-16, 66-61 loss to the top seeded Kansas Jayhawks.

Providence struggled in the first half scoring only 17 points on 20% shooting – the lowest scoring half in Friars tournament history. Providence trailed 26-17 at the half.

The lead ballooned to 13 points before the Friars made a 21-8 run to tie the game at 44. The Friars took their first lead of the game at 48-47 with 5:49 following a backdoor layup from forward Noah Horchler. Horshler who also knocked down a pair of 3s to fuel the comeback led the Friars with 21 points.

Kansas star guard Ochai Agbaji struggled from the field but set the tone early on defense. His three blocks in the first four minutes of the game were already a season high. Agbaji connected on an explosive alley-oop with three minutes left that sealed the game.

Jayhawks are feeling it #MarchMadness pic.twitter.com/FcIvwyaeM4

Providence’s season ends here with their first Sweet 16 appearance since they reached the Elite-8 t in 1997. Kansas the lone 1 seed remaining will keep their hopes alive with an Elite Eight match-up against 10 seed Miami.

March 25th is National Peacock day as the St. Peter’s Peacocks magical tournament run continues. The Peacocks became the first 15 seed to ever reach the Elite Eight after another stunning upset, beating 3rd ranked Purdue 67-64 in a game that wasn’t supposed to be close, at least according to oddsmakers.

The game was tight throughout with 15 lead changes. Purdue had a big size advantage but the Peacocks, like they have been all tournament were undeterred.

St. Peter’s guard Matthew Lee tied the game at 57 with 3:17 remaining. A minute later Daryl Banks III (who led the Peacocks with 14 points) hit a driving to give St Peter’s the lead. Purdue could not mount a comeback. Boilermakers Star and likely NBA lottery pick Jaden Ivey was held to only 9 points on 4-of-12 shooting.

St Peter’s has now knocked off No. 2 Kentucky, No. 3 Purdue and No. 7 Murray State to become the first seed 13 or lower to reach the final eight.

Cinderella's not ready to leave the Dance ?#MarchMadness @PeacocksMBB pic.twitter.com/4W7n8MhGQR

Two of the greatest college basketball programs in NCAA history slugged it out in a Sweet 16 match-up with the 8th ranked North Carolina Tar Heels edging out UCLA 73-66.

UNC will face the 15 seeded St Peter’s Peacocks for a chance to reach the final 4 and a possible matchup with Duke and head coach Mike Krzyzewski’s.

The Miami Hurricanes are the second double digit seed headed to the Elite Eight – the first in school history –  after knocking off Iowa State 70-56.

Miami Guard Kameron McGusty put on a show for the folks in Chicago. McGusty finished with 27 points on 10-18 shooting and 4-7 from the three point line to go along with six rebounds and four steals. The 10 seeded Hurricanes have a match-up with the last remaining 1 seed Kansas Jayhawks on Sunday.