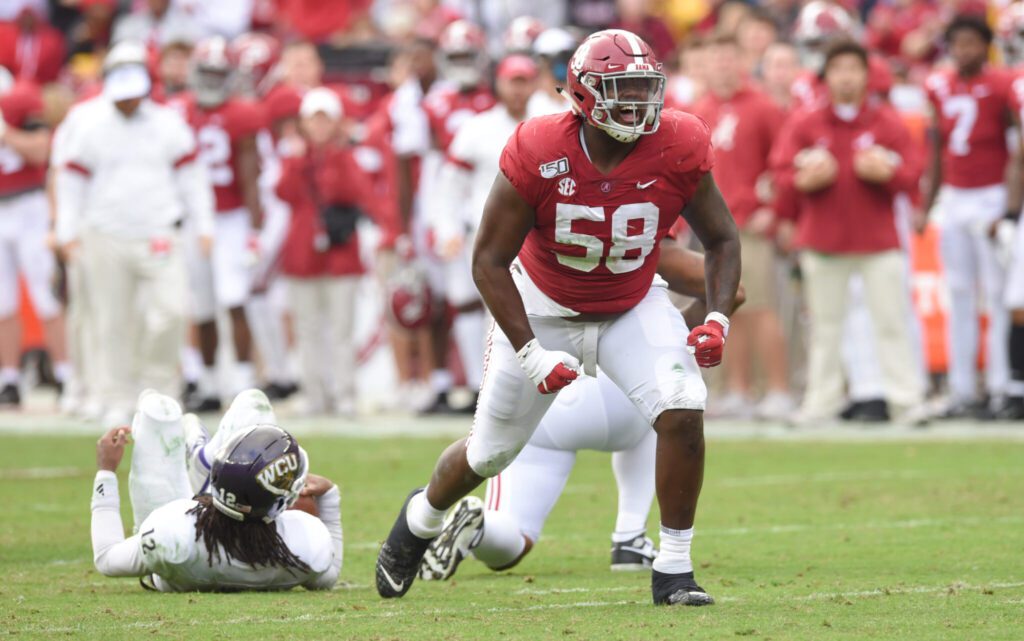 Predicting Bill Belichick’s plans for the Patriots in the NFL draft is a difficult task, but we will do our best by creating a big board with the top 50 fits for New England.

The big board produced five future Patriots in N’Keal Harry, Joejuan Williams, Chase Winovich, Damien Harris, and Josh Uche over the last two drafts. Hopefully, 2021 will be better than 2020.

My goal is to hit on as many players as possible that New England might select in the first three rounds, emphasizing the premium picks, in which the Pats currently hold three (no. 15, no. 46, and no. 96). With that in mind, we will include prospects projected to go in the first four rounds.

The players were decided by comprehensive film study, scheme fit, and Patriots draft trends and ranked by my overall grades.

Here are the first batch of prospects in our 21-30 tier:

Click here to view prospects in the second tier (31-40)

If the #Patriots are looking for a coverage LB on day two, Kentucky's Jamin Davis is a dude. Great athlete and feel for man/zone coverage.

After running a 4.48 in the 40 at 234 pounds, Davis’s stock is skyrocketing. The Kentucky linebacker could end up going in the first round due to his athletic profile, but there’s still plenty of seasoning needed for Davis as a run defender in the box. In coverage, he’s close to NFL-ready, with multiple reps dropping with Kyle Pitts in coverage as evidence. Davis was impressive in his zone drops and had the awareness to find Pitts off play-action concepts. Then, he was equally as good matching running backs and receivers up the seams. Davis has a new-age flavor with good size and athleticism to roam off the ball. But he’ll need to refine his technique taking on blocks and diagnosing plays against the run. Davis doesn’t feel like a Belichick linebacker, but the team has targeted athletes at the position in recent drafts.

First, the good. Barmore's go-to move is an arm over & its very effective. Also can snatch OLs & is effective on stunts. pic.twitter.com/YT3pYlJYPs

I’m significantly lower than most on Barmore’s fit for the Patriots, but there are things to like about his game. My hesitation with the Alabama defensive tackle is that he’s a boom-or-bust prospect whose preference is to fire off the ball to shoot gaps and rush the passer. Barmore is not a two-gapper against the run, and his best fit is as a penetrating three-technique. Even Nick Saban felt that way about Barmore, which is why he didn’t play every down for Alabama. Barmore’s get-off and upper-body power are flashy qualities if he can commit to playing with better pad level against the run. As we saw in the college football playoff, he can be a game-wrecker. In New England’s system, Barmore is likely a situational pass-rusher in Adam Butler’s old role. Is that worth a first-round pick? No, and it’s certainly not worth it at 15.

Probably higher on Georgia CB Eric Stokes than others. He doesn't have elite play speed/production. But he's so calm and technically sound in press-man. Game never looks to big for him and stays in-phase often. Steady player. Reliable tackler too. #Patriots pic.twitter.com/OggfkYnrjb

Stokes surprised many evaluators at his Pro Day when he ran a 4.31 in the 40-yard dash, and he’s one of the most experienced corners in this class. Stokes held a prominent role in the Bulldogs defense for three seasons and put out quality tape. He’s very technically sound at the line of scrimmage in press-man coverage and never looks overwhelmed. Stokes forces receivers to play through contact and has natural hip fluidity for work along the sideline. Although his tape doesn’t necessarily jump out at you, he’s a calm and steady outside corner that played in a system that will translate to the NFL.

One of the best athletes in this tackle class, it’s easy to notice Radunz when you’re evaluating Trey Lance, and then you want to watch more of the left tackle. Radunz dominated at the FCS level with plenty of play strength to overwhelm edge defenders as a run blocker. He also moves like a tight end in space and has the foot speed to mirror edge rushers as a starting left tackle. Radunz will need to add muscle to his frame to handle NFL power and is sometimes prone to narrowing his base as he slides in pass protection. But the foundation is there for a starting left tackle in the NFL with significant upside. After dominating the FCS, Radunz garnered plenty of praise at the Senior Bowl as well where he was voted as the top practice player of the week. His athletic profile is reminiscent of former Pats left tackle Nate Solder.

There are big-time contested wins from Marshall all over his tape. Using his size and a good initial burst off the line to go above the rim. Fade out of the right slot. pic.twitter.com/ldtXC8ba3u

Marshall’s profile scares me for obvious reasons for the Patriots. Marshall posted a RAS of 9.94 out of ten, running a 4.38-second 40-yard dash at 6-2.5, 205 pounds. He’s the definition of a size/speed prospect in a similar athletic mold to past early-draft receiver targets for New England. The LSU product has the qualities for future success as a vertical route runner; he’s an impressive accelerator and builder of speed off the line, is smooth in his vertical transitions (posts, corners, etc.), and can stop down effectively. There’s some evidence that he can cut at the top of routes, Marshall was effective at finding soft spots in zone coverage, and he has some experience playing in the slot. However, he’s a vertical route-runner that wins downfield at the catch point to his core. If the Pats are looking for an X receiver in this draft, Marshall fits the bill. Still, it’s hard to ignore the Jackson, Dobson, and Harry vibes.

Filthy post-corner. Wins at the line by getting the CB to bite on an outside release, sell/break, dusted. pic.twitter.com/EqYQ6lp4XE

St. Brown is one of my favorite wide receivers in this draft, even if he doesn’t possess the intriguing athletic profile as some others. The USC product has average long speed, but he’s an absolute technician that is incredibly smooth out of his breaks. He understands how to attack defenders in man coverage and set up his moves at the top of his routes, and his 6.81-second three-cone time is apparent when you watch how quickly he moves through his breaks. St. Brown has many of the same qualities as a route-runner that make Jakobi Meyers a natural in this offense but plays with another gear compared to Meyers. If I’m New England, I’m passing on the raw athletic freaks that have failed me in the past and targeting a guy like St. Brown, who you know will understand his route tree and excel in the scheme. He’s not as athletic as Justin Jefferson, but there are some similarities in how the two players consistently get open with their route running.

If the #Patriots have an expanded role in mind for Kyle Dugger, they could pass the Chung role off from one Oregon Duck to another. Jevon Holland is the real deal: anticipation in off-man, ball skills, +run defender from the box or slot. Day two prospect. pic.twitter.com/NZlKWQMg29

Holland is my number two rated safety in the 2021 class. The Oregon product is a new-age hybrid with the range and ball skills to play deep safety while also possessing the mirroring abilities to cover receivers out of the slot. Holland had nine interceptions and ten passes defensed during his two seasons at Oregon, thanks to excellent anticipation and closing burst to break on the ball. He’ll also come down closer to the line to play the run and is always lurking in shallow zone coverage. As the Patriots look for a successor to Devin McCourty, adding Holland to Kyle Dugger would be a fierce tandem in the future. For now, Holland can carve out a role as a third safety a la Duron Harmon and play in the kicking game, where he also looked good as a returner.

Lazar: Outside of Mac Jones, Kellen Mond Checks Most Boxes for Patriots at Quarterback

The endless debate amongst Patriots fans right now is how early is too early to draft Mond? Mond operated a pro-style system for three seasons at A&M in the SEC West, where some of the best defense is played in college football. Then, he won Senior Bowl MVP. Although the results were inconsistent, Mond plays mostly a clean game, makes the proper reads in the system, protects the football, and adds value with his mobility. The other piece of context that is important with Mond is that his best receiver opted out of the 2020 season, and he wasn’t working with loads of NFL talent like others in this QB class. At his Pro Day, Mond showed a level of arm talent that I wasn’t entirely sure he had. Even if it came against air, seeing him make those downfield throws made you feel better about his NFL projection. The downside with Mond is that he had some accuracy woes and had very few impressive downfield throws. In other words, watching his tape isn’t exciting like it was with Justin Fields or Trey Lance, for example. Still, there’s untapped potential here, and the physical tools are appealing. I would be okay with the Pats selecting Mond at 46, even though the hope is they target a first-round QB.

These are the types of option routes that scream Pats. Attacking leverage in stems, pacing/acceleration through breaks, YAC machine. pic.twitter.com/ylfkgn3G1z

Rodgers is the day-two receiver prospect that I want in New England, as he gives off serious Deebo Samuel vibes. He is built like a running back and runs like one with the ball in his hands. Whether it’s a schemed touch or after the catch, Rodgers has excellent burst and elusiveness in the open field, combining that with noticeable separation quickness at the top of his routes. He’s also great at finding voids in zone coverage, working over the middle, and making himself an easy target for the quarterback. He ran routes out of the backfield or in-motion behind the line of scrimmage and is a perfect fit to replace Julian Edelman. Although there are better downfield receivers in this draft, the Patriots have pass-catchers that can win on vertical routes with their two tight ends and Nelson Agholor. Jonnu Smith is great after the catch, but the Pats’ wide receiver room is missing a YAC machine that will create explosive plays as a ball carrier. A versatile wideout with Rodgers’ skillset is the missing piece in this offense, and he’s going to present great value where he’s projected to go in this draft.

Leatherwood was a three-year starter for the Crimson Tide with an NFL-sized frame. The term “pro-ready” is a draft cliche, but Leatherwood is truly pro-ready as he was battle-tested in the SEC in a pro-style blocking scheme. The 6-foot-5, 315-pound tackle is a road-grader whose power into his run blocks pops, and there’s plenty of carryover from Alabama’s gap/power-heavy run game to what we see in New England. In pass protection, Leatherwood is explosive out of his stance to cut off the angle and easily anchors against power. Then, his hand usage and power consistently show up on tape when he stuns defenders on contact. Leatherwood is a little stiff in space and needs to improve his balance in his pass sets at times, but those are issues that are easy to workaround. He’s one of those linemen that you draft knowing he’ll be a long-term starter.