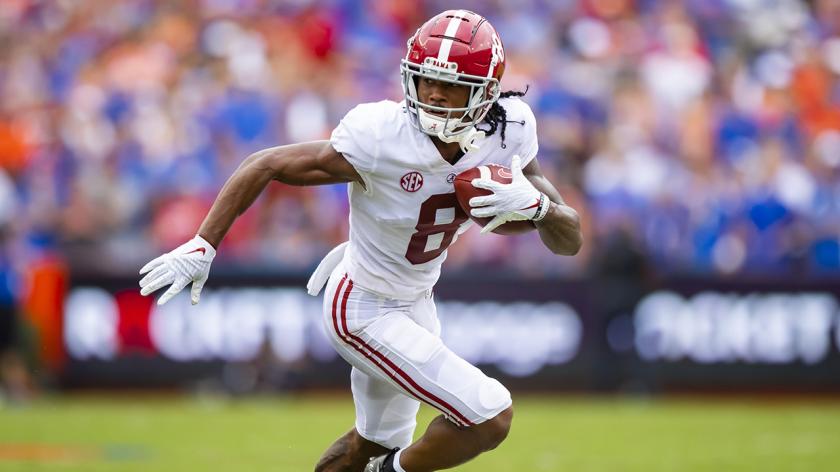 Above, are the prospects from our first two tiers that were ranked in the 31-50 range of our big board.

Let’s continue the countdown with our 21-30 tier, which highlights prospects who are projected day two to fringe day-one selections:

As the Most Valuable Player at the Senior Bowl and a former Sooner, Perrion Winfrey is squarely on our radar. In Oklahoma’s defense, Winfrey was an alignment-versatile player, lining up from over the center to a five-technique on the tackles. Along with his flexibility, Winfrey’s initial explosiveness into gaps and lateral mobility to work up and down the line of scrimmage made him a one-man wrecking crew for the Sooners. He doesn’t have the size to post-up inside, winning instead with initial quickness off the snap and lateral mobility. In multiple reviews of the Oklahoma defense for various prospects, Winfrey is everywhere. He’s a very challenging player to block.

A flying cross-chop with a rip finisher and recover your own forced fumble from a 6-4/315-pound DT. Hello, Phidarian Mathis. #Patriots pic.twitter.com/te9k1NkVpV

Adding more length and bulk to the equation than Winfrey, Mathis is a prototypical Patriot who played next to Christian Barmore on Alabama’s defensive line down in Tuscaloosa. Why not reunite the formidable duo in Foxboro? Mathis uses excellent lower-body flexibility and upper-body strength to play with a low center of gravity against the run as a pure two-gapper. He’ll also flash lateral quickness inside to slip around blockers and penetrate gaps, while his pass-rushing toolbox is impressive for an interior defender of his size. The Alabama product has the fluidity and hand technique of a more finesse player but can still reset the line of scrimmage. Mathis and Barmore would give the Pats a long-term base 3-4 defensive end pairing, who can then reduce inside on passing downs.

#Georgia WR George Pickens is coming off an ACL injury in the spring that limited him to just four games in 2021. But he can flat-out fly and his vertical route-running is excellent.

CB playing a bail technique and Pickens still eats up the cushion and snaps off the route. pic.twitter.com/6QeXlccaLB

From everything we’ve heard out of Foxboro, there’s internal support for the Georgia wideout. Pickens has the size-speed combination New England is after on the outside, clocking a 4.47-second 40-yard dash at 6-foot-3, 195 pounds. However, he has only played 12 games over the last two seasons due to injury and the COVID-shortened season in 2020. Pickens is healthy now, though, and would be in the round one conversation if he had more tape for the national champs. His burst off the line and smooth transitions at the top of his routes stand out the most. Pickens is near the top of this class in terms of threatening CBs with his vertical stems, and he can stop on a dime to create separation after pushing upfield. Plus, Pickens is an ultra-physical run blocker. He is a premier talent who ran into lousy injury luck in Athens (torn ACL at spring practice in 2021).

Christian Watson is a 6-5 WR projected to run in the 4.3s. His fluidity to cut & stop is impressive at his size+ brings breakaway speed.

Bottom of the screen. Vertical threat forces CB to open hips upfield, cleanly stops down to separate, then check out the move after the catch. pic.twitter.com/veli9H5rHn

Watson is a little bit of a project. It’s not that he can’t run routes, but rather that we didn’t see a diverse palate at North Dakota State. Instead, the Bison had Watson stretching the field or using his tremendous speed and explosiveness on schemed touches. The optimistic view is that Watson plays to his 4.36-second 40-yard dash and should present immediate problems as a deep threat. Plus, when you watch him carry the football, you see a fluid athlete that can sink and cut exceptionally well for a player of his stature, suggesting that he has the movement skills to run a more varied route tree. Watson is a loose, explosive mover with tremendous upside. At the very least, he will be a headache for opposing defenses as a field-stretcher and ball carrier.

Sorting through some old draft stuff and stumbled upon a Mac Jones to John Metchie reel. Plenty of chemistry between these two in Mac's last season at Alabama.

Metchie tore his ACL in the SEC title game. But wouldn't mind it at all for the #Patriots on day two. pic.twitter.com/7INgYa996S

Sometimes we don’t need to overcomplicate things in the draft, and pairing Metchie with his former college quarterback Mac Jones is one of those examples. Metchie caught 55 passes for 916 yards and six touchdowns as a go-to weapon for Jones during Alabama’s run to the national championship in 2020. Then followed that up with 1,142 yards and eight TDs with Bryce Young. The Alabama wideout plays bigger than his size down the field at the catch point, routinely wins one-on-one matchups, makes sudden changes of direction, and shows good instincts as a ball carrier to create big plays on underneath routes. Metchie has arguably the best three-step slant in this class and is good on crossers and slot fades, too. Yes, Metchie tore his ACL in the SEC Championship Game, putting his rookie season in doubt. But reuniting him with Jones would be a wise long-term investment for the Patriots. There was obvious chemistry between Metchie and Jones in the Crimson Tide offense.

If the #Patriots draft Jahan Dotson, I'd sell you on it with this one rep (bottom of the screen). His press releases were a bit inconsistent in the games I saw. But the tools are definitely there. My goodness. His QB play was also…not great. pic.twitter.com/hEcjmEVwva

Dotson might not be everyone’s cup of tea in a draft filled with flavors at wide receiver, but he’s certainly a promising prospect. He’ll likely play as the Z or flanker receiver where he can stay away from press coverage and use his 4.43-speed unimpeded. Dotson’s explosiveness off the line and ability to accelerate through his vertical breaks makes him very difficult to cover in space. He also managed 1,182 yards and 12 touchdowns playing with sub-par quarterback play last season, often making up for inaccurate passes with acrobatic grabs outside his frame. However, he was often bullied by press corners when he was running routes on the perimeter. Dotson is a speed-slot receiver who will give NFL secondaries problems if a creative OC schemes free release for him regularly. His separation ability and strong hands usually translate to the next level.

Finally got to Skyy Moore and he didn't disappoint. Arguably the best footwork, suddenness, agility in this class. Slant/glance route machine. Always threatening leverage in stems. Plays through contact and picks up YAC. Definitely on the day-two radar for #Patriots. pic.twitter.com/bcIeaHGLNV

After clocking a 4.41-second 40-yard dash at the combine, Moore’s stock is rising to the point where he might come off the board between New England’s top two selections. Although his agility testing wasn’t as quick, my pro comparison for Moore is still Julian Edelman. The Western Michigan product threatens defensive backs in the initial stages of his routes in his releases and stems, then carries the football after the catch, is reminiscent of Edelman. Moore ran a vertical route tree for the Broncos with three and five-step slants feeding into vertical routes. But he moves like JE11. On film, Moore is also quicker than his timed agility drills suggest. He’s in the conversation for the best route-runner in this class. If the Pats can line up the board to get their hands on Moore, he’d make an immediate impact.

There is plenty of buzz in league circles that Cine could sneak into the first round after a terrific season for the Bulldogs and an outstanding workout in Indy. Cine combines his excellent athletic profile with an aggressive attitude as a patrolling safety in the middle of the field. He made big-time plays in big moments for Georgia down the stretch, covers grass in a hurry to make open-field tackles, and is not afraid to lay the wood. Cine played more split-safety and match zones for Georgia than as a true centerfielder, but his play speed and field awareness suggests he’d be just fine in that role. He has immediate-starter potential.

Projects as an outside CB w/versatility to play multiple spots in the secondary. Fits the Pats’ mold. pic.twitter.com/hRUjkpC9Qe

Although Gordon will be the second Huskie corner to go off the board next week, he’s oozing with cover talent, just like his teammate Trent McDuffie. In some ways, Gordon’s profile suggests that he will be a better playmaker at the next level than McDuffie. He has better length and similarly good closing burst to clamp down at the catch point. But he’s not as refined as McDuffie is as a tackler in the open field, and he has some issues finding the football from with his back to the quarterback. Still, Gordon has the foot quickness, size, and ball skills to develop into a starting outside corner in New England’s scheme. All indications are that Gordon is highly-thought of in Foxboro.

With the Patriots searching for potential Kyle Van Noy replacements, Mafe checks the necessary boxes to play Van Noy’s role in their system. The Minnesota product uses a speed-to-power rushes and an effective chop move to dent the pocket, has the girth and playing strength to set the edge against the run, and was very impressive dropping into coverage off the line of scrimmage. Due to an unconventional square stance, Mafe wasn’t presented with many opportunities to turn the corner as a pass rusher and would take false steps out of his two-point stance. As a result, he’ll need some seasoning, and the production might not immediately be there. But Mafe is one of a few edge rushers in this class who fits the KVN mold for the Patriots.