Luke Kornet is holding opponents to 4-for-16 shooting on his signature contests, but those are a small part of his defensive success for the Celtics. 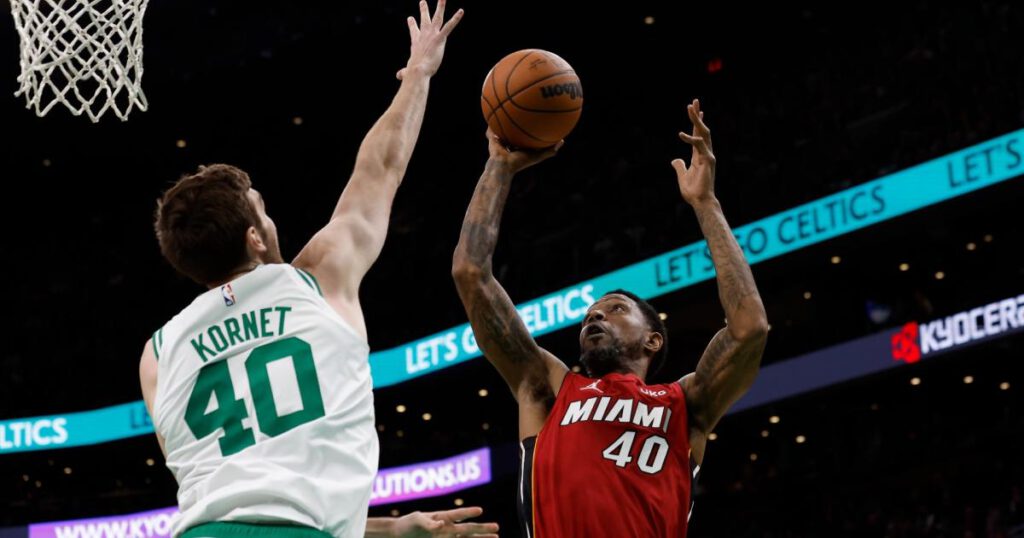 Luke Kornet recently made an adjustment to a move captivating and confusing the NBA.

He started jumping from the post to block the view of the rim for three-point shooters two years ago. Someone told Kornet, during his path through the G-League back to the NBA, the short contest made a difference on opponent shooting. He tried it in Maine last season and in practice, and saw results, so he kept doing it.

Each Celtics game typically features one Kornet contest now, usually against a weaker shooter that Kornet is playing drop defense against. Isaac Okoro missed twice in a row against it, Kelly Oubre Jr. overshot from the corner and Jordan Goodwin looked particularly impacted in the Wizards’ last loss in Boston. Others, like Paolo Banchero, appeared undeterred, but the final tally stands at 4-for-12 on threes, according to Sporting News writer Stephen Noh. A small sample size makes it hard to decipher between shooting luck and defensive innovation, as does Udonis Haslem and Dewayne Dedmon’s presence in the data. Kornet is weighing it all.

“I came about it pretty organically,” Kornet said earlier this season. “I’ve been told it makes a difference, and in the amount of times I’ve used it, it seems to make a difference. If numbers start indicating otherwise, I’ll adjust, but as long as it seems to be effective, especially against certain types of shooters, I’m obviously of the stature that allows it to be a little more effective than most, I’ll keep doing it.”

Joe Mazzulla noticed Kornet needed to adjust before the Celtics faced the Hornets, seeing offensive players starting to lift the big man in the air to drive around him. Oubre successfully did so, attacking Kornet off the dribble from the left corner.

On a Celtics team starting to hit its stride defensively playing alongside their offense, statistically the greatest ever, one or two Kontests each night become negligible. Especially while Kornet provides value as a rim-runner and shot deterrent on defense. It simply adds a hilarious layer to an already fun product.

It’s also become more of a last resort. Kornet and the defense raised their pickup points against offensive players earlier this season. He began contesting more jump shooters from mid-range and occasionally the three-point line. When he has no chance to get there, he’ll leap into the Kornet contest. Otherwise, he’s directly contesting 5.9 shots per game in 13.7 minutes, trailing only Al Horford (10.6) and Derrick White (6.2). Opponents shoot 46.4% when guarded by Kornet, fifth among Celtics regulars. Since Mazzulla suggested that Kornet alter the approach publicly,

“A lot of times you’re in a pretty bad position to start, so it’s kind of uplifting,” Kornet said. “We’re weighing the balance of trying to make this shot worse, it’s better than just standing there. You’re kind of just playing that balance. Some guys are driving it, but I’m honestly more on the play than I would be if I was just trying to run out on it … but if they seem to have a pretty good shot, you want to do whatever you can and live with the result, whether they shoot it or try to drive it.”

The Kontest both brought attention to Kornet, a player who didn’t have an NBA contract to start last season, and took away from his otherwise stellar defensive play to start this season. His 3.5 BLK% ranks in the 89th percentile of the NBA, according to Cleaning the Glass, and opponents shoot 22.1% of their attempts at the rim when he plays, the lowest figure in the league.

Teams take 45.9% of their attempts from the mid-range when he plays, the highest frequency in the league, playing exactly into how the Celtics want to defend opponents. They also struggle to produce threes against his lineup, only taking 32% of their shots from deep when he plays, and hit 31.1%, which ranks in the 94th percentile. The Kornet contest is a small part of that number, and for a player who embraces the little things, he’ll take it.

“You’re definitely not trying to jump forward, be more in the position,” Kornet said. “Then usually by the time they’re driving, I do have time to land and turn. A lot of times too, it’s more compressed plays where they’re kicking out to that guy. So there tends to be more bodies in the paint, which helps as well.”

The Suns, who live and die by the mid-range, shot 5-for-17 when guarded by Kornet on Wednesday while Horford exited the lineup in COVID protocol and Blake Griffin made a second consecutive spot start in his place. Griffin’s pinch hitting role and Kornet’s defensive prowess with what’s become a dominant second unit have helped spell Horford more than many expected in Robert Williams III’s absence.

The Celtics still lean heavily on the veteran, signing him to a two-year extension last week, but they’ve now won five straight games with Griffin starting in his absence. They’ve now outscored opponents by 4.9 points per 100 possessions when Kornet plays.

The Celtics saw defensive potential in Kornet from the moment they acquired him though. It’s the offensive transformation, from pick-and-pop shooter to roller and passer, making him a formidable player who can contribute each night. He shot 6-for-6 on Wednesday and is now 71% from the field after entering this season 40.8% from the field through 148 career games. Sam Hauser and Kornet’s G-League stint prepared them for the system.

“In Maine, last year was a lot of focus on playing without the ball and getting here with Joe running the show, it’s been a lot of that as well,” Hauser told CLNS Media. “So we’re used to doing that from last year and also playing with each other, we have a good feel for where we are on the court and have good chemistry. So I think that’s really benefited us for sure.”

Screening. Dribble handoffs. Rim protection in drop. The Celtics narrowed Kornet’s role to let him thrive in it, and they’ve successfully positioned two formerly undrafted prospects to shine off their bench in a system they didn’t enter the team prepared to play in.

Opponents remain skeptical about the Kornet contest even as the number return positive for him early this season. A solution may loom around the corner, or shooting fortune could continue to lean in his favor.

Kornet never took credit for changing defense. He simply tried to boost his own chances from a difficult position.

“Maybe it’s a good thing to do,” Steve Clifford said. “It’s not gonna be as good as if you can get up into somebody and do it. I can tell you that. These guys play so much basketball, it’s like when they talk about going to different arenas. None of that matters to me. These guys can see the rim. The big number in shooting, at any level, is contested shots. Can you make somebody shoot quicker? Can you impact the shots with a hard contest? Which speaks to getting closer to them. So I may be wrong, but I can’t imagine that has, maybe it has an impact, but not nearly the impact it would have if you’re into somebody.”