Luke Kornet said the swelling has gone down as he's day-to-day with a left ankle sprain. His fellow big men impressed in the Celtics preseason opener. 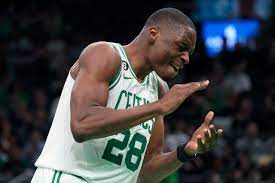 BOSTON — Luke Kornet walked around more comfortably after the Celtics’ walkthrough on Friday, put a few shots up and quickly returned to the weight room at Auerbach Center. He missed the preseason opener one day later against the Hornets, a 134-93 rout where Boston’s big men who Kornet competed with throughout camp impressed.

Kornet rolled his left ankle on Thursday, he told CLNS Media before Sunday’s game, and saw the swelling reduce since. He’s taking the injury day-to-day. Initial reports indicated he would miss 1-2 weeks with the ailment, poor timing after he spent time with Celtics starters during the first week of training camp and stood in line to receive a starting role in a preseason game. Now, he’ll hope to return sooner rather than later to factor into the front court ahead of Boston’s season opener in two weeks.

Joe Mazzulla went smaller to start Friday’s exhibition, starting Derrick White for the injured Robert Williams III in a move the interim head coach said not to read into. Early rebounding issues challenged the Celtics, giving up five offensive boards to Charlotte in the first six minutes and trailing 16-14.

Boston mixed in veteran training camp invite Noah Vonleh, who grabbed nine defensive rebounds, and he would start the second half. Mazzulla also tried downsizing more before half, guarding Mason Plumlee with Marcus Smart while Jayson Tatum and Sam Hauser stood as the tallest Celtics on the floor. Plumlee scored on consecutive possessions from the free throw line against the ultra-small unit.

Small ball, however, filled the floor with playmakers in an explosive showing for Boston’s offense. The Celtics won the second quarter, 39-22, and led by as many as 46 points. They hit 22-of-47 from three (46.8%), including 4-of-5 from Hauser, and assisted on 41 of their 48 baskets. Still, the Hornets outscored Boston in the paint, grabbed 16 offensive rebounds and forced the Celtics to foul 29 times on the defensive end of the floor. Boston turned the ball over 23 times.

“Don’t let this game fool you, we’ve got a lot of work to do,” Jaylen Brown said post-game. “Got to take care of the ball better, got to be more connected on offense and defense, rebound a lot better and those are the type of things you want to build now in preseason. We’re not patting ourselves on the back over one preseason game.”

While the Celtics’ interior play stood strong, Al Horford dishing three early assists with more ball time, Vonleh hitting a three and rolling dunk, before an energetic second half from Mfiondu Kabengele, Kornet’s role in the Boston rotation aimed to maintain the team’s rotations in a world where Williams III was healthy. Mazzulla hoped to keep much of last year’s identity, which included playing bigger and 7-2 Kornet, with his shot-blocking prowess, would’ve been a prime candidate to start halves next to Horford.

That’s what disappointed Kornet most as teammates capitalized on the opportunity. Kabengele accidentally dapped up an official after pouring in a three-point put back in the second half. He caught an alley-oop slam from Hauser and dove on the floor for a loose offensive rebound, sending the Garden, Celtics bench and a towel-waving Smart to their feet. Kabengele, a 6-10, physical rim-runner who can hit threes, is signed to a two-way contract.

“See ball, get ball,” Kabengele said. “That’s all I was thinking … you take it day-by-day, obviously (roster spots) are on your mind and you want to get those things and achieve more, but when you get ahead of yourself you kind of fall into traps … double-R, rebound and roll, that’s what I do.”

Blake Griffin appeared in TD Garden on Sunday and met with Brown, though his reported signing with the team hasn’t been made official and Mazzulla couldn’t comment on it pregame. Griffin eventually add to the mix of competitors for front court minutes, where Grant Williams showed off his flexible role as what he self-described to CLNS as a six positionally.

Grant will guard fives, perimeter players and entered the season wanting to show off a more complex shot profile. He began that process by hitting a left-handed layup off the dribble to go with his pair of threes from the corner and the wing. While Horford and Grant enter the season as rotation fixtures, and Williams III will return as the starting center and defensive anchor, the team’s regular have already committed to coaching up Kabengele.

“I can ask (Al) any questions, smart questions, dumb questions, he’ll answer it,” Kabengele said. “Most of the questions I ask … are in the pick-and-roll coverages. Sometimes I have a hard time gauging where I should be at, playing cat and mouse with the ball-handler, and figuring out how I should guard it. Al gives me good tips on how to guard it properly, especially with different personnel and stuff, so he’s been really helpful. Rob’s been good just because he’s been out, so every time he watches practices while he does his rehab, he might give me a little comment here and there of what I can work on.”