The Patriots QB was once an MVP-hopeful. Now you can't even bet on him. 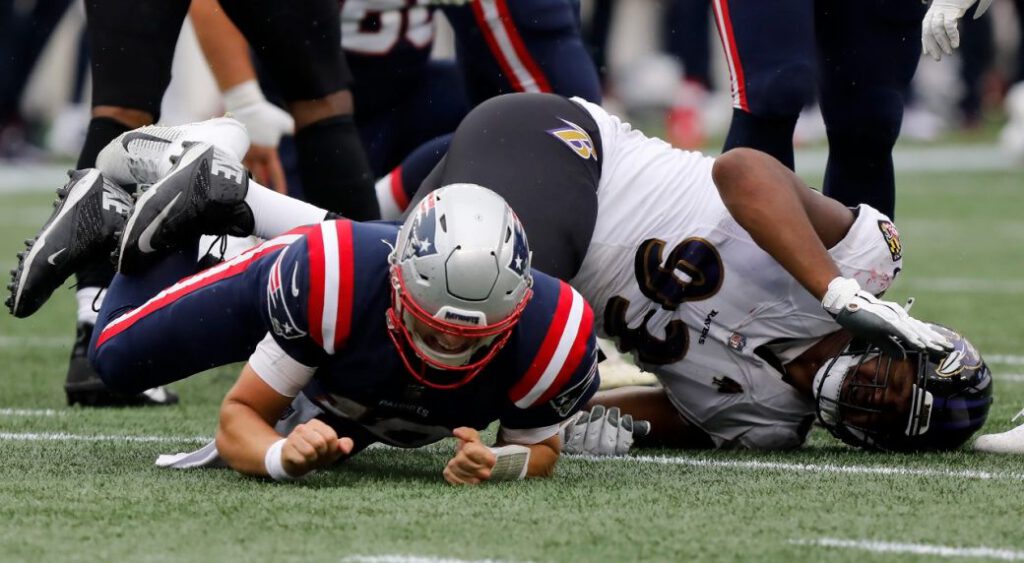 If you bet Mac Jones to win the NFL MVP at the start of the season, I’d recommend picking up a part-time job in your spare time.

After what some would consider a promising start to the offseason, Patriots quarterback Mac Jones’ odds to win the 2022 NFL MVP were the shortest they’ve ever been at 33/1 (+3300) according to BetOnline.ag.

However, after a confusing offseason with question marks surrounding his supporting cast, these odds fell every week – and after suffering a high ankle sprain against the Ravens on Sunday, his odds are now completely off the board.

The Patriots have had a tumultuous week.

If you thought that starting a week with a 37-26 loss to the Baltimore Ravens could only go up – you’d be wrong.

As I mentioned above, New England’s franchise, their leader, their quarterback – Mac Jones – looks to have a rough road ahead of him after suffering a high ankle sprain in the 4th quarter of Sunday’s game.

According to ESPN’s Adam Schefter, Jones has, “what doctors diagnosed as a severe high ankle sprain that would cause many to have surgery, per sources. He is likely to miss multiple games. Jones and the Patriots still are discussing his options and the best way to proceed.”

I asked Jones his thought on potentially getting tightrope surgery on his injured ankle. Here’s what he told me:

“Yeah I’m just kind of taking it day-to-day and making sure everything’s good. Honestly, any injury questions are Coach Belichick’s thing. So I’m not here to answer them. I appreciate everyone kind of reaching out and looking out for me. But it’s kind of just a day-to-day thing. I’m just trying to get better.”

It’s going to be interesting to see seeing how they play this, and if New England makes a move at another signal caller.

They’ll likely add another arm for practice purposes, but I doubt they bring in a free agent (like Cam Newton) or a practice squad guy (like Josh Johnson) to takeover the starting job. I’d expect the make-up to Brian Hoyer and Bailey Zappe, with Hoyer presumably getting the reigns to start.