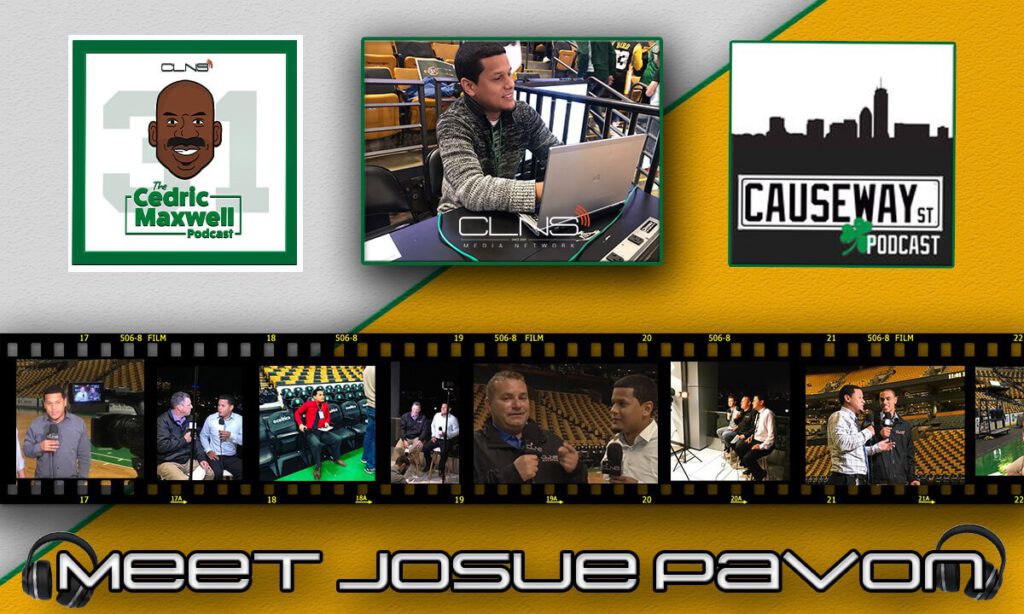 BOSTON — CLNS Media sat down with long-time CLNS/WEEI Celtics Beat Reporter, Josue Pavon, for a compelling conversation on his life, his new podcast with Celtics’ legend, Cedric Maxwell, his years co-hosting the Causeway Street Podcast (Nick Gelso‘s personal fav on the cluttered Celtics’ podcast scene) and where he sees his future taking him.

Check out ‘Sway on The Causeway Street Podcast and The Cedric Maxwell podcast weekly on CLNS Media.

CLNS: Josue, what made you to want to pursue a career covering the Celtics?

PAVON: I think it was just my love for the game, honestly. After I earned my bachelor’s degree in Communications/sports journalism, it was a no-brainer for me. I started my own blog, Causewaystreet.com and it sort of just took off from there. I had so much to say and love analyzing the game. I was able to eventually get my writing samples to Rob Bradford, editor of WEEI.com, who eventually offered me a position as his Celtics writer and that’s when I joined the beat.

CLNS: Do you have any specific childhood memories that you revere as it pertains to the Celtics?

PAVON: Absolutely, a ton. I’d probably say my favorite ones were just watching the games with my dad and my older brother. We would watch them all the time growing up, seeing Paul Pierce, Kevin Garnett and Ray Allen come together and capture an NBA title is probably my favorite. Just the run they had and the way they were able to put it all together in their first year together was fun to watch. It was like tuning into a tv show that was so entertaining and fun to watch, seeing them compete and play at such a high level. Especially after watching Pierce come such a long way through so many trying years, that was probably my favorite Celtics memory. The underdog finally worked his way to the top, that story never gets old to me. Sports is special in that way, it tells countless stories.

CLNS: What led you to being apart of CLNS Media?

PAVON: So during my first year on the Celtics beat, I was invited as a guest to film The Garden Report and it sort of just took off from there. Tommy White eventually reached out to

me about a fill-in role, which at the time I was excited about because I never did much on-camera work so it was new to me and I was starting to like it. Then, when CLNS picked up my podcast, Causeway Street Podcast, I was able to build a strong relationship with Nick Gelso and the rest of guys. I’m thankful for the opportunity they’ve given me. In this industry, that’s all you can really ask for at the end of the day. You make the most of what you earn and you never take these opportunities for granted.

CLNS: Are there any individuals you look up to, model yourself after, and/or have influence on your life outlook and career?

PAVON: Not really, honestly, I always try to be unique and true to myself and who I am as a writer/broadcaster and personality. Growing up, Michael Holley was definitely my favorite. Such a talented writer/broadcaster. Man, I used to be late to class or sometimes skip back in high school just because he had a hot take or was going on and on about a specific topic, back when he had his midday show on EEI. But in terms of modeling myself after a person, that’s not something I ever tried to do when I was in college or after I graduated and got my first gigs. I think finding my own voice, approach and style is so important. It’s something that’s constantly evolving and that’s who I model myself after and constantly try to improve whether it’s in my writing, on camera or behind the mic.

CLNS: How did you and Max become friends?

PAVON: Max and I became friends, I’d say about a season ago from having so many conversations before and during Celtics home games. What’s great about Max is, he’s always down to talk about anything that’s on your mind. Anything at all, he has an opinion on it, so we rarely talk Celtics or NBA, most of our conversations are about the same things I’d talk about with my friends outside of work. Whether it’s current events, movies, pop culture, politics, etc. we always have these great talks that are filled with laughs. Sometimes it’s too funny, man. We’ll both be in tears from laughing so hard.

CLNS: How did the hosting The Cedric Maxwell Podcast happen?

PAVON: I loved our conversations so much that it dawned on me one day that our back and forth would make one hell of a podcast. So many people don’t get to hear this side of Max. You hear him breakdown the Celtics and analyze the games but he has so much more to say about other topics. You may catch a glimpse of it when he does particular interviews on the radio or on other podcasts but I thought this was a great opportunity to hear him outside of the role of a Celtics analyst and that’s what I can’t wait to unfold. For listeners to enjoy Max the raw and uncensored, maybe not quite the exact same guy I talk to before each and every Celtics game ha, but as close to it as possible. He loved the concept and the idea when I brought it up to him and we were able to put it all together. It was a chance for him to speak on anything he wants, and to tackle some very important topics he’s always wanted to dive into and I think that’s what’s going to make this so special.

CLNS: What are some hobbies outside of reporting and watching sports that you enjoy?

PAVON: I’m pretty laid back, man. Nothing crazy, just hanging out with my friends and family. Whether it’s watching movies, grabbing food or just enjoying each other’s company. I do go running/jogging in the summertime too, that’s a new hobby of mine of late. Jogging through the city of Boston is fun, relaxing.

CLNS: Do you have a favorite book and/or movie?

PAVON: Yes, favorite book is The Great Gatsby, movie: Good Will Hunting. It’s been the same since high school, man and I think it’s going to remain the same for a while.

CLNS: Where do you see yourself in 5 years?

PAVON: That’s a great question, we’ll have to wait and see. This industry is so unpredictable. Five years ago, if someone told me I’d be doing a podcast with Cedric Maxwell I would have wondered, ‘How the hell did that come together?’ I’m sure there’s something similar waiting for me in 2024, let’s play it out and see what happens.

PAVON: Aw, man. That’s a good question. I don’t know if I can unveil it, you’ll have to wait and hear him tell it himself. I’ll tell you this much though, it’s something that happened to him in college in and outside of a dorm. He can tell it way better than I can.

CLNS: Obviously Max was retired before your time but can you share your favorite moment of Max’s playing days?

PAVON: I can’t, honestly. What I remember most from his playing days was watching ESPN Classic — does that channel still exist, by the way? — and seeing him put his team on his back and taking them to the promised land. The 1981 NBA Finals. Max could definitely ball with the best of them. These youngins need to go to YouTube and check him out, he was a beast.

CLNS: What is your greatest goal when it pertains to Max/You Podcast?

PAVON: To get into entertaining, important and thought-provoking conversations. Whether it’s sports, race, or politics, there’s a lot to talk about and we come from two different backgrounds but we also have a lot in common. I think that’s why we’ve become good friends and that’s what’s going to make this podcast so great. I’d say the overall goal is to get these conversations out there so that listeners can have conversations of their own with each other that they maybe never had before or would have never had if it weren’t for listening to The Cedric Maxwell Podcast.