Revolution midfielder Sebastian Lletget impresses in his New England debut as the Revs earn a 2-2 draw with Portland. 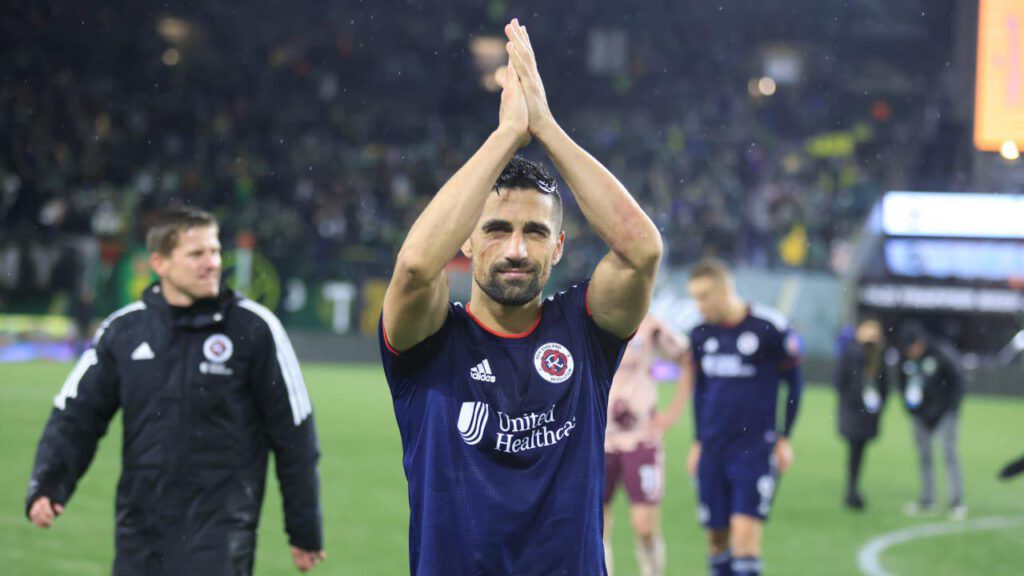 One game in and New England Revolution head coach Bruce Arena is already seeing his offseason moves pay off.

USMNT midfielder Sebastian Lletget  – one of 3 former Arena disciples who joined the Revs this offseason – scored New England’s second goal in his Revolution debut, a 2-2 draw with the Portland Timbers.

It was the season opener for both clubs who combined for 33 shots through a driving rain at Providence Park. The soaking wet conditions enabled a back-and-forth contest and a high tempo offensive game.

The Revolution opened the scoring on the brink of halftime. In the 41st minute, fullback Brandon Bye headed an outward cross over two Timbers defenders to find the back of the net. It marked just Bye’s sixth career goal, cashing in on New England’s sixth corner of the first half. New England went into the locker room leading 1-0.

Darion Aspiralla equalized for Portland in the 60th minute. Santiago Moreno sent a thru ball from the edge of the box to Aspiralla on a perfectly-timed run to split between a pair of Revs center backs to tie the game at 1-1.

Just 127 seconds of gameplay later, the Revs retook the lead. The Revs marched on a rapid-fire counterattack just two minutes after conceding. Lleget tapped in a cross from the left wing into the far-right hand corner, with no Timbers defenders within five yards of him.

“I want to make my mark on this team,” Lletget said after the match. “I want to do well. I want to help this team win a championship. I’m here to create things and I’m here to add value to the team. To score a goal in the debut and just build on that, that’s kind of where that message was.”

The Timbers nearly tied the game in the 70th minute, on a wide-open header from Jaroslaw Niezgoda. Josecarlos Van Ranklin sent in a high cross into a lurking Niezgoda who snuck an uncontested header in between two Revs defenders, but Niezgoda sailed his attempt over the bar.

Portland would knot the game back up eight minutes later on a moment of magic. Yimmi Chará scored on an overhead bicycle kick goal in the 78th minute to retie the game, 2-2. The ball deflected off Andrew Farrell on a cross from the right side, and Chará acted quickly to pounce on a loose ball with a spectacular finish. Chará created havoc for New England’s backline all game long with the ball in open space, and pounced on a loose ball to earn Portland a draw.

The Revolution nearly won the game in the 97th minute, in the final seconds of stoppage time. Adam Buksa sent a header on a pinpoint cross from Carles Gil on target, but saw his shot saved. Portland goalkeeper Aljaž Ivačič was quick to react, turning the ball away for a corner. That marked the final goalscoring opportunity, and New England’s last chance to escape Portland with a win.

The Revolution were without starting goalkeeper Matt Turner due to an ankle injury. Thirty-year old Earl Edwards, Jr. earned the start, his first since 2018. Edwards, Jr. held a clean sheet up until the hour mark, holding off high pressure and blistering fast Portland counterattacks in the first half.

In addition to Lletget the other two Revolution making their debut were Omar Gonzalez who started at center back, and Jozy Altidore who made his debut off the bench in the 79th minute as a substitute.

Gonzalez won 3 MLS Cups as the starting central defender for the Los Angeles Galaxy under Arena in. 2011, ‘12, and ‘14. Altidore played under Arena with the New York Red Bulls from 2006-2008. He is one of the most decorated players in US Soccer history. Altidore has played in two FIFA World Cups, won MLS Cup MVP honors and has accumulated 115 senior caps, ninth most in United States history.

The Revolution are back in action next Saturday at 1:30 p.m. against F.C. Dallas from Gillette Stadium.