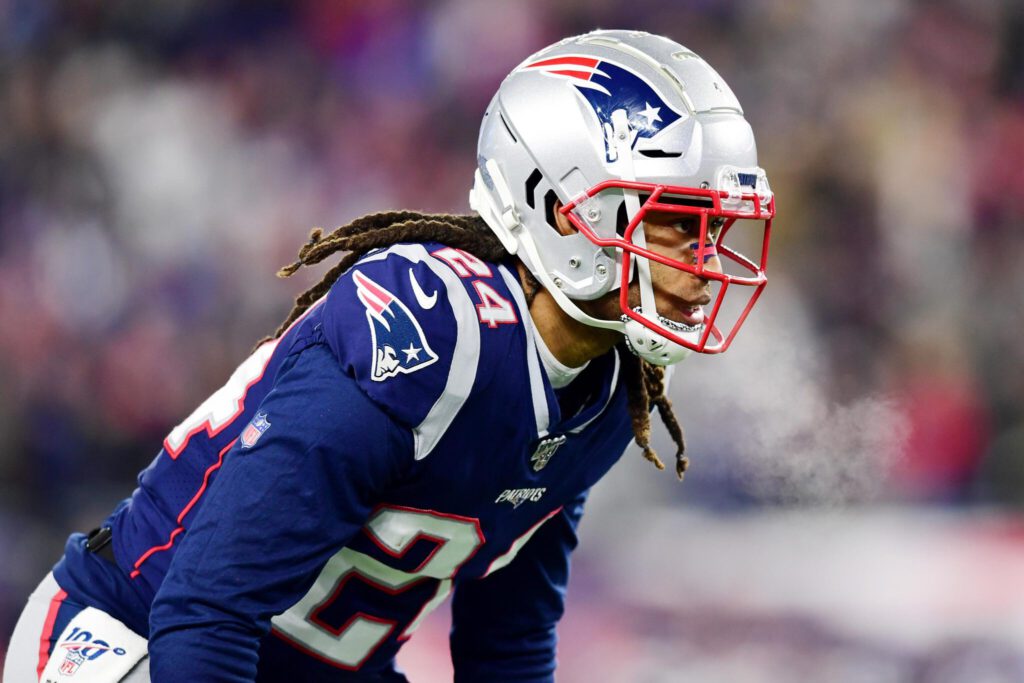 The Patriots defense had one of the most dominant seasons in coverage of the last decade in 2019, headlined by a shutdown group of cornerbacks.

New England’s success starts with a heavy dosage of man coverage in the secondary, which wouldn’t be possible without talented personnel capable of holding up in challenging matchups. The Pats played the second-most man coverage snaps in the NFL last season, intercepting 18 passes while only allowing ten touchdowns.

The Patriots’ man coverage prowess stems from talent and a team approach in the secondary with defensive backs working in tandem to put each other in positions to prevent completions.

According to Pro Football Focus, Bill Belichick’s primary coverage is cover-one, and the Pats played the third-most snaps in cover-one last season with a ridiculous -.341 EPA per play.

New England’s corners mostly play with outside shade in a trail position, staying underneath their opponents to mirror route breaks knowing their safeties in the middle of the field will remain over the top of any deep patterns and cut off any crossing routes.

Here’s a great example from Stephon Gilmore’s matchup with Odell Beckham Jr. last October. Gilmore is isolated on Beckham at the bottom of the screen with post safety help. He maintains his position on Beckham’s outside hip through his release, and Odell tries to shake the reigning DPOY with a corner-post route. Knowing he has help on the post from the deep safety, Gilmore doesn’t bite on the fake at the top of the route and smothers Beckham’s break on the corner pattern, forcing a short completion to Jarvis Landy on the underneath crosser.

Playing off their safety help, New England’s cornerbacks anticipate routes and force opposing quarterbacks to make difficult throws outside the numbers against corners with advantageous positioning.

Although their coverage system puts their cornerbacks in positions to succeed, the Patriots have one of the most talented secondaries in the NFL featuring insane depth at corner.

Below are scouting reports on all seven cornerbacks currently on New England’s roster:

Summing up Gilmore’s talents in a few paragraphs doesn’t do him justice. Gilmore led all corners in forced incompletion rate over the last two seasons, allowing only one touchdown to 13 pass breakups (six interceptions) in 2019. He combines an elite athletic profile with preparation, patience, route anticipation, hand technique, ball skills, and uncanny poise to lock down number one wideouts every week. The key to Gilmore’s success is his willingness to trust his athleticism to stay square at the line. Gilmore works every rep in press-man to maintain his positioning rather than allowing a receiver to move him off his spot in their release. In a game of cat-and-mouse, whoever moves first and gives up positioning loses. The Pats corner uses different techniques in press coverage to keep opponents off-balance, defend his matchup that week properly, and play to his help.

(bottom of screen vs Amari Cooper)

His go-to technique is to mirror, like guarding someone in basketball, where he trusts his terrific footwork and eye discipline to read the receivers’ routes and match them up the field, using his hands to feel out the route.

Sometimes, he’ll use a quick jam, like in New England’s cover-zero schemes, to smother the receivers’ release and prevent them from getting upfield.

The Pats corner uses film study and recognition to anticipate route patterns. As the highlight shows, Gilmore breaks on DeVante Parker’s crossing route before Parker does. Based on his knowledge of Parker and the formation, Gilmore knew Parker was running a crosser and ran underneath the route to tip the pass to Devin McCourty for an interception.

Example of one of the #Patriots’ go-to blitz calls from the AFFCG that @JamesALight says they call “dime odd magic-0.”

New England’s success defensively largely stems from Gilmore’s ability to handle difficult man coverage assignments mostly on his own, allowing scheme flexibility in the rest of the secondary. There are very few cornerbacks that get assigned the opposition’s top receiver in coverage nearly every week; Gilmore is one of them.

Here are a few ridiculous stats on JC Jackson:

– Led all cornerbacks with at least 100 coverage snaps in passer rating into his coverage last season (37.0, via PFF)

– In man coverage, held opponents to a league-best QBR of 13.3 and an insane EPA of -27.8 with five interceptions and zero touchdowns allowed (via Doug Farrar)

– He is also impossible to beat deep, intercepting six passes to only three receptions allowed when targeted 20-plus yards downfield in the last two seasons (via PFF)

#Patriots film: JC Jackson is balling. His 2nd INT starts at the line to force John Ross into the sideline. Gets his hands on him, limits the room Ross has to work with. Stays in the hip pocket and uses the safety rolling over the top as help, tracks the ball perfectly. pic.twitter.com/Dr8X1CA78Z

Jackson is one of the league’s best cornerbacks since entering the NFL in 2018 based on the numbers by playing a physical brand of coverage and tracking the deep ball as well as anyone. He forces wideouts into difficult spots by redirecting them at the line of scrimmage and riding their releases down the field. Using his hands to feel out receivers, Jackson then anticipates routes and gets early breaks on the ball.

He plays with excellent awareness and is developing nicely in New England’s zone coverages as well. Jackson’s next step is to improve in the slot so he can travel with all kinds of wideouts. He had some issues early in the route against slot receivers because it’s more difficult to jam them inside, going from a 17.3 passer rating on the boundary to a 76.7 rating out of the slot. The 24-year-old is one of the best young cornerbacks in the league and is deserving of more national attention for his play.

All-22 of the JMac PBU: DMac and Jon Jones both go with the crosser over the middle out of quarters coverage busting the play. JMac has the deep quarter of the field on the top. #Patriots get lucky because nobody releases into his zone. Reads the QBs eyes and makes the play. pic.twitter.com/B868Ah4rIK

The other McCourty twin is one of the most fundamentally sound defensive backs on New England’s roster. McCourty’s versatility to play inside, outside, man coverage, and zone coverage made him appealing to the Patriots when they finally brought him and brother Devin together in 2018. McCourty trusts his feet to remain patient throughout the route and plays with terrific eye discipline to avoid getting baited out of position. He also is excellent at playing to his help, sticking to his assignment, and like Devin, he has a great natural feel for the game. Entering his 12th NFL season, McCourty will turn 33 in August. But the only thing better than one McCourty is two, as the Pats learned that Jason is as trustworthy in the secondary as his twin brother.

Williams only played 85 snaps on defense as a rookie and will once again struggle to find playing time in his second season, begging the question, why did the Pats take him in the second round last year? For starters, the Pats loved Williams’s football character and willingness to put in the work. Then, he began to get the hang of things by the time the Pats traveled to Nashville for joint practices with the Titans. In Tennessee, Williams looked good in matchups with bigger wideouts, such as Corey Davis and A.J. Brown, but ultimately it was too difficult to jump Jackson or McCourty on the depth chart. The nearly 6-foot-4, 211-pound Williams has the body type and coverage skills to play a Brandon Browner-like role for the Pats, as outlined here, taking on big-bodied wideouts and pass-catching tight ends. Williams played almost exclusively outside corner in college, so this offseason he’s working on expanding his role by training at safety and in the slot. However, it’s hard to see him leapfrogging anyone in a crowded safety room either. Although it’s a limited sample size, Williams can play and will get a shot to prove himself on the backend of his rookie deal. For now, he’s waiting in the wings.

One of New England’s first moves of the offseason was signing the veteran corner in February. Pipkins was an undrafted free agent signee of the Packers after the 2017 draft. The Oklahoma State product spent the 2019 season out of the NFL after the Browns released him at the end of training camp. At 5-foot-11, 196 pounds, Pipkins flashed man coverage skills and solid recognition against underneath patterns during an impressive 2017 preseason with Green Bay. But he’s got stiff hips and is a subpar athlete, making it difficult for him to stay strapped to receivers through their route breaks. Pipkins is a longshot to make the roster.

Coverage stats weren't nice to Jon Jones by the end of the season but don't let that distract from the fact that he's a heck of a player: play speed, route recognition, plays through hands, willing run defender, open field tackling. One of the best slot CBs in the game. #Patriots pic.twitter.com/tYV7pvzW1E

Jones had an up-and-down season in coverage statistically in 2019. After a strong start to the season, a groin injury limited him down the stretch, where Jones surrendered four touchdowns in the Patriots’ final seven games. But Jones made receivers work even when he was beaten and is excellent in his role as New England’s primary slot corner. He uses his speed to stick with wideouts all over the field and challenges at the catch point consistently. The Patriots ask Jones to travel with some of the league’s fastest players, such as Kansas City’s Tyreek Hill, and Jones has been successful in those matchups. His elite special teams abilities make him a core contributor in the kicking game and translate to impressive open-field tackling on defense. He’s also a sound run defender, even when tasked with fitting on the ball in the nickel role. Jones expanded his role to safety last season, where New England used him in the deep half in their cover-two structures out of their base defense at times. Playing in the slot where receivers have more space and a constant two-way go is the most challenging position in the entire secondary. Jones is one of the best in the league at it, which is why he was rewarded last summer with a three-year contract extension through the 2022 season.

The Pats waived the undrafted free agent with an injury designation after a strong start to camp last summer. He eventually reverted to New England’s injured reserve, and the Pats stashed the 23-year old due to their depth at the position. The 5-foot-9, 180-pound corner out New Mexico looked the part of a Patriots corner with a strappy style that challenged receivers at the top of routes with his tight man coverage. Early in camp, there was some buzz that he might make the team as an undrafted rookie, but the depth at corner with a second-round pick joining the team as well was too much to overcome. Instead, Ross will give it another go in his second season. He has the talent to be on an NFL roster.