New England has a tall task ahead of them this weekend at Lambeau Field. 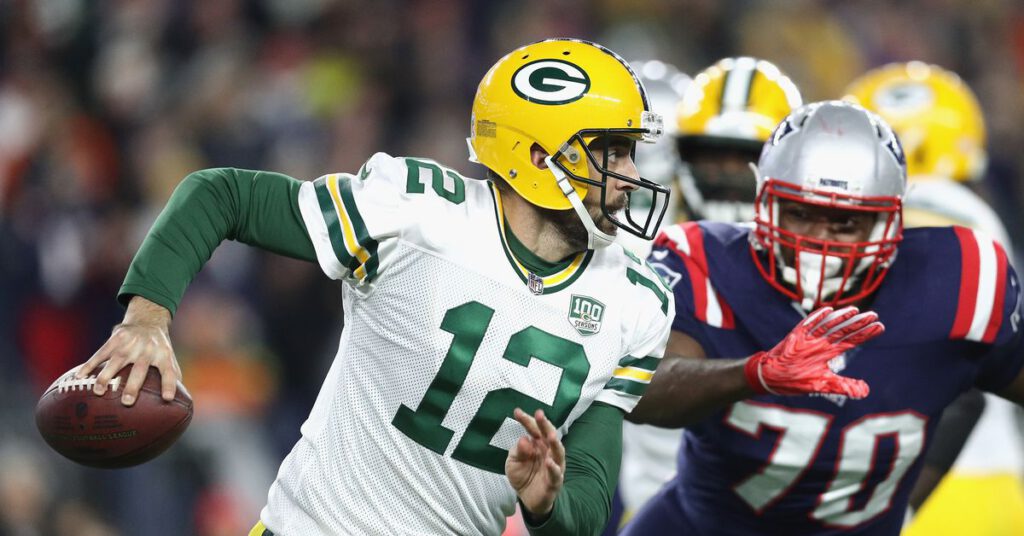 With all of the news coming out of Foxboro this week surrounding Mac Jones’ ankle injury, it’d be easy to forget that New England has a game this week.

That’s why I’m here. The Pats will travel to Green Bay, Wisconsin this weekend to take on the Packers at 4:25pm on Sunday. The game will air on CBS with the A-team of Jim Nantz and Tony Romo on the call.

As always, our gambling sponsors at BetOnline.ag have you covered with all of the best bets and odds surrounding the NFL. Here are their odds for Sunday’s game at Lambeau Field:

As I said, the story in Foxboro this week is alllll about quarterback Mac Jones’ ankle. The second year signal caller was rolled up on during New England’s 37-26 loss to the Ravens last weekend, and has yet to practice this week for the team.

Despite not being on the field yet, NFL Network’s Mike Giardi reported today that Jones was “in the facility and participating in game planning. The Patriots QB has to told multiple teammates to not count him out of this weekend’s game at Green Bay, and is still operating as if he has a chance.” We’ll see what happens come Sunday.

To add insult to injury, former Packer and current Patriots defensive lineman Lawrence Guy did not practice on Wednesday, and hasn’t yet this week. This would be a big loss for the New England front and is certainly something to monitor.

Speaking of the Packers, they’re 2-1 so far in 2022 but have not looked like the Packers of old – at least on the offensive side of the ball. They’ve scored just 16 points per game and Aaron Rodgers has been very meh so far – likely due to the loss of his favorite wide receiver ever, Davante Adams.

The defense for Green Bay has been solid, letting up just 15 points per game on their end and only giving up 302 yards per game, good for 6th in the NFL. Brian Hoyer will have his work cut out for him.

Speaking of Hoyer! By all accounts, Brian Hoyer is going to make his first NFL start since 2020. The journeyman backup has been in the New England system for a combined eight seasons, and although I’d love to see rookie Bailey Zappe at the helm in Green Bay, Hoyer is the best option for this team.

Hoyer talked on Wednesday about the idea of him still being a good quarterback. He said, “I don’t think I’d still be here if I wasn’t.” I’d tend to agree, however he’s lost his last 11 starts.

Fun fact though: Brian Hoyer has the highest winning percentage by a starting quarterback in Cleveland Browns history – with a record of 10-6.

5 catches for 156 yards was the stat line Parker put up against the Ravens on Sunday, finally showing why New England traded for him this offseason. Whether it was the absence of Jakobi Meyers or not, Parker made an impact and vastly improved on his 1 catch for 9 yards combined in the first two games.

NESN’s Dakota Randall asked Jones about his switch from slot corner to outside this season: “You’re definitely on your own. There’s a different perspective from being inside. There’s not as many bodies between you and the quarterback. You’re kinda just out there and you’re on your own. But, same mentality. You lock in, eyes on your guy. … Just get out there and compete.” He’s certainly competed this season.

As I noted in the storylines, Rodgers has had a so-so year thus far in 2022 – likely due to the loss of Davante Adams. Rodgers has thrown for just 684 yards and 4 TD through three games, and has a QBR of 48.9 – good for just 15th in the NFL.

Rodgers will need to get back to his 2-time defending NFL MVP form soon if Green Bay wants to compete for a Super Bowl this season.

The Packers drafted wide receiver Romeo Doubs out of Nevada in the fourth round of this years draft, and he was immediately tasked with some heavy lifting after the team traded Davante Adams to the Raiders this offseason.

Doubs wasn’t great through the teams first two games, but he popped off last week against Tampa Bay – hauling in 8 catches for 73 yards and a touchdown. They’ll need that again this week against New England.

Though I don’t think the Patriots have enough to get the job done on Sunday, I think they’ll keep it competitive. After all, the last time Brian Hoyer played for New England against Kansas City in 2020, they kept it close until the very end.

I expect the same to happen on Sunday. Packers win, Patriots cover, and the total goes 6.5 points under. New England heads into Detroit week with a 1-3 record, hoping to finally get themselves on track in 2022.