W2L4: How Bengals Avoid A Halloween Nightmare In Cleveland 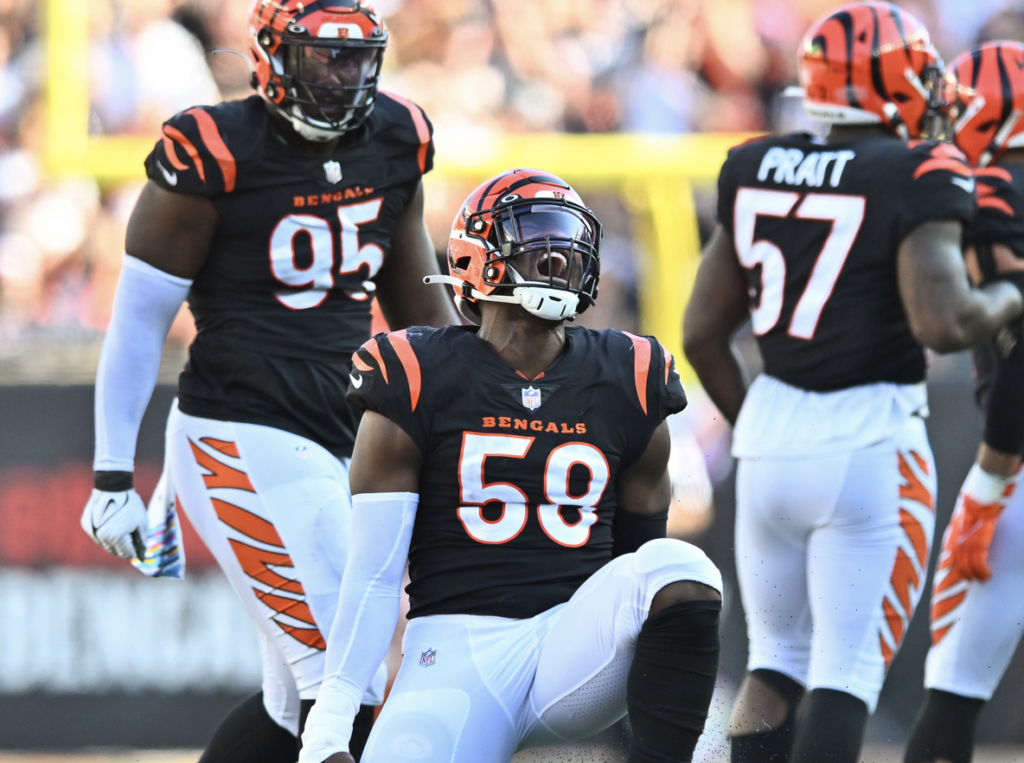 CINCINNATI – The first seven weeks of the 2022 season for the Bengals have been filled with tests of their character, will and perseverance.

All three will be tested again this week as they play their first game without star receiver Ja’Marr Chase, out several weeks with a reported hairline hip fracture and torn hip labrum, leaving the slack to be picked up by Tyler Boyd and Tee Higgins.

The Bengals will also be without Josh Tupou, out for a second straight week with a left calf injury, DJ Reader, missing his fifth straight game with knee injury and Stanley Morgan (hamstring). The team is likely without starting corner Eli Apple due to a hamstring issue, making way for rookie corner Cam Taylor-Britt to make his first NFL start after playing 26 snaps in last week’s win over the Falcons.

While there will be some significant absences, the Bengals will get linebacker Logan Wilson back after a right shoulder injury during the Saints game that forced him to miss last week. Jeff Gunter also returns to action after missing the last two weeks with a knee issue. Defensive edge Trey Hendrickson, who left last week’s game with a neck injury, returned to full participation on Saturday after missing Thursday and Friday, and will play.

Despite missing Reader and an offense that was slow to get started, the Bengals have rebounded from an 0-2 start to win four of five and look for their first three-game win streak of 2022. More importantly, the Bengals need this game to avoid falling to 0-3 in the AFC North, having lost on opening day to the Steelers and on Sunday night football in Baltimore to the Ravens on Oct. 9.

Joe Burrow has never beaten the Browns, albeit in only three tries. This will be Burrow’s second primetime trip to Cleveland, losing a 35-30 shootout to Baker Mayfield in his second NFL game in Week 2 of the 2020 season. That Thursday night, he threw the ball a franchise-record 61 times, completing 37 for 316 yards and three touchdowns.

Cleveland enters at 2-5 and is looking to snap a four-game losing skid.

The Monday night platform has not been kind to the Bengals, especially on the road. The Bengals are 12-25 in 37 all-time games, with their last win coming in the memorable (and meme-orable) Ryan Finley flash-that-winning-smile game, a 27-17 win over the Steelers on Dec. 21, 2020.

The Bengals are coming off a dominant 35-17 home win over Atlanta in Week 7 that featured complementary football throughout the game. Offensively, Joe Burrow led a unit that posted 537 net yards and scored a touchdown on each of its first four possessions to build leads of 21-0 and 28-7.

Burrow completed 34 of 42 passes for 481 yards and three TDs for a passer rating of 138.2, and added another score on a one-yard QB sneak to extend the lead in the third quarter. The Bengals’ defense, meanwhile, allowed just 214 yards and forced the Falcons to punt on each of their four drives in the second half, extending their streak to seven consecutive games without allowing a TD after halftime.

“I would say that,” said Burrow when asked if he is playing his best football of the season. “I’m feeling comfortable. We’re getting the timing down, we’re starting to find a rhythm as an offense. Then, the defense is going to continue to do what the defense does. I think we’re finding our stride.”

While Chase did have a pair of touchdowns, Tyler Boyd set a career high with 155 receiving yards on eight catches, including a 60-yard TD just two minutes into the first quarter that offered a preview of what was to come. Tee Higgins had five receptions for 93 yards, highlighted by a 25-yard catch at the goal line that led to Burrow’s one-yard sneak on the following play.

“We’ve really gotten back to the basics of our pass game,” head coach Zac Taylor said. “Just some core bread and butter stuff that allows the ball to be spread around. They’re trying to help on Ja’Marr and Tee on the outsides, and so it just opens it up for guys like Hayden (Hurst) and TB.”

"We don't put extra pressure on ourselves." Tyler Boyd on loss of Ja'Marr Chase #Bengals pic.twitter.com/NDfMQFWMNA

Burrow put himself in some elite company following his performance. He became just the third player in NFL history to record at least 475 passing yards, three TD passes and one rushing TD in a single game, and his five career games of 400 or more passing yards surpassed Pro Football Hall of Famer Dan Marino for the most by any player in his first three seasons.

Burrow has strung together several high-level performances, completing 71.3 percent of his passes with 12 TDs to just one interception over the last five games.

Here’s what to look for in Game 8:

The Bengals have had a notoriously difficult time with one of the game’s best pure running backs. Chubb killed the Bengals in Week 9 last season, gaining 137 yards on 14 carries, including a 70-yard touchdown run that put the game on ice, en route to a 41-16 Browns win. In that Week 2 game of 2020, Chubb went for 124 yards on 22 carries and two touchdowns, including a 26-yard rush. Logan Wilson returning helps but the Bengals need big games from BJ Hill and Jay Tufele. Zach Carter and Tyler Shelvin might see some significant action. Safety Vonn Bell could also play a role. All hands on deck. Chubb is averaging 5.87 yards per carry this season and 105.7 yards per game. He has 24 carries of at least 10 yards and eight over 20. Kareem Hunt is also averaging 4.0 yards on 66 carries.

Cooper is Cleveland’s best receiving threat. He has 34 catches for 422 yards and four touchdowns. Bengal-killer Donovan Peoples-Jones is third with 26 grabs for 336 yards but no touchdowns. The Bengals catch a big break as star tight end David Njoku is out with an ankle injury. Njoku is Cleveland’s second-leading receiver with 418 yards on 34 catches.

The Bengals don’t have Ja’Marr Chase but they still have Tyler Boyd and Tee Higgins. That’s significant because the Browns are without Denzel Ward (concussion), who altered the energy of last year’s game in Cincinnati when he picked off Joe Burrow for a 99-yard pick-6 on the first drive of the game. The Browns also have corner Greedy Williams, who is coming off an illness that forced him to miss practice Thursday and Friday. Burrow should have more than enough weapons to stress the Browns defense vertically IF they can handle Myles Garrett and Jadeveon Clowney.

The Bengals offensive line has certainly enjoyed a resurgence in the last five weeks, coinciding with the 4-1 record the Bengals have amassed. But they get one of their toughest tests of the season this week when both tackles have to account for two of the biggest game-wreckers in the NFL. Garrett became Cleveland’s all-time official sack leader in Week 6 with 64.5 career sacks. His six sacks are tied for fourth in the NFL. He’s also forced two fumbles. Clowney has 1.5 sacks and has forced a fumble.

The rookie out of Nebraska gets his first NFL start if Eli Apple (hamstring) can’t go. Taylor-Britt showed great speed in his first action last Sunday, even though he had just two balls thrown his way. The Browns no doubt will test him and Peoples-Jones has had some big games against the Bengals, namely the game-winning catch in 2020 at Paul Brown Stadium. If he needs it, DC Lou Anarumo will give some help with Bates and there are other things the Bengals can do to help him. But the Bengals are confident in Taylor-Britt and now, on the road in primetime, he gets to prove it.

Getting Hendrickson back is a big deal in this game. The Bengals should be able to pressure Jacoby Brissett, who is behind an offensive line without right guard Wyatt Teller. Brissett has been sacked 14 times, throwing for six touchdowns while throwing five interceptions. The key to this is getting the Browns into obvious passing situations by not allowing Chubb to dominate. Look for a lot of eight in the box early in series on to keep the Browns from getting into short yardage situations.

This game is about making sure that Nick Chubb doesn’t run roughshod over the defense. If the Bengals keep that from happening and don’t make mistakes offensively, there’s no reason they shouldn’t end a four-game losing streak to the team up I-71. Losing Ja’Marr Chase stings but again the Bengals have plenty of other weapons in the arsenal to ease the pain and this is why the Bengals went out and added a pass-catching tight end in Hayden Hurst. Could we see more Chris Evans in this game? The Bengals play a solid game they come out with a business-like win and keep pace with the 5-3 Baltimore Ravens in the AFC North.