Bengals look to match last year's 5-4 mark at bye with a win. 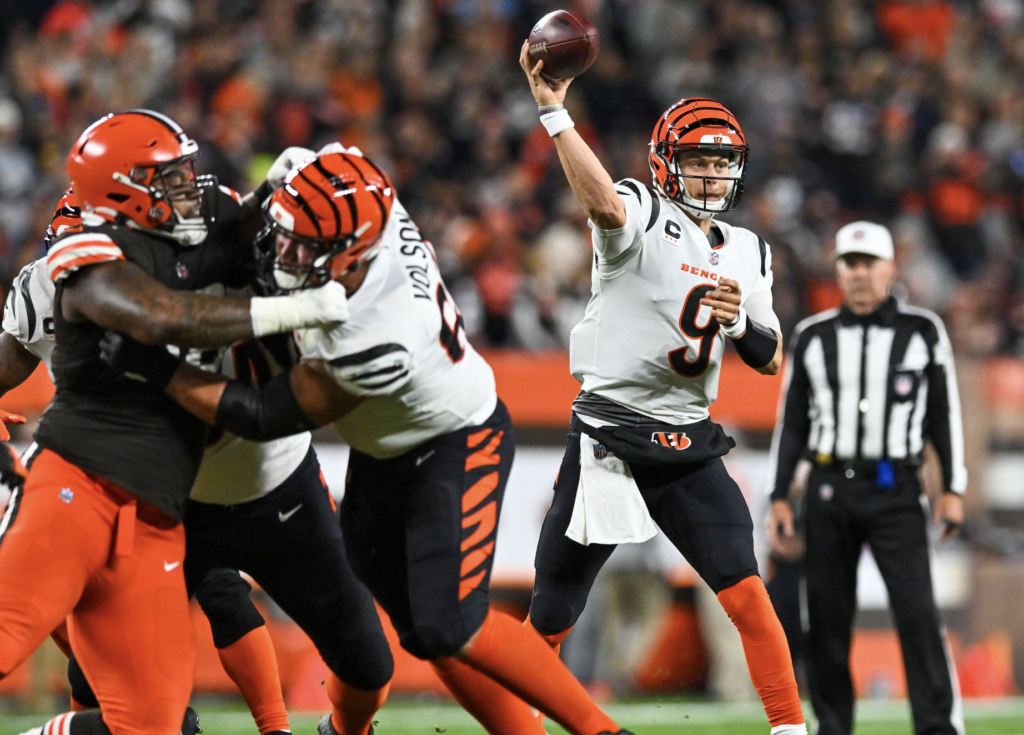 CINCINNATI – The Bengals are about to get some answers about their depth and quality of their secondary.

Mike Hilton is out with an injured pinky finger on his left hand. Chidobe Awuzie is out for the season with a torn ACL in his right knee. Tre Flowers is questionable with a hamstring injury suffered in the second half of the game against Cleveland.

And Eli Apple is coming back from a hamstring issue of his own and a benching in favor of rookie Cam Taylor-Britt during the win over Atlanta two weeks ago.

The wheels are spinning fast in the secondary and the Bengals are hopeful they have enough answers starting this Sunday against a Carolina team that came within an unsportsmanlike penalty from pulling off a miracle comeback against Atlanta last Sunday.

That penalty by receiver DJ Moore came on the heels of a 62-yard bomb from PJ Walker (replacing Baker Mayfield) that tied the game, 34-34, with 12 seconds left. Moore yanked off his helmet in celebration and was called for the 15-yard penalty, making the extra point 48 yards instead of 33. Eddy Pineiro pulled the PAT wide and the game went to overtime. Pineiro missed a field goal in overtime and the Falcons escaped on a 41-yard Younghoe Koo field goal.

Carolina is 1-2 under interim coach Steve Wilks, who took over for Matt Rhule, fired after a 37-15 home loss to San Francisco on Oct. 9.

With Hilton out, the Bengals will turn to third-year safety and special teams contributor Jalen Davis. The free agent out of Utah State will be making his first career NFL start, assuming the Bengals start in a nickel defense, which they have all season.

The Panthers typically go with a “12” formation, which includes one running back in D’Onta Foreman and tight ends Tommy Tremble and Ian Thomas.

While much of the focus has been on the injuries in the secondary, the biggest issue with the Bengals this season has been their inability to dictate the tempo of the game with their offense, which again let them down badly on Monday. With Ja’Marr Chase for the first time this season, the Bengals looked utterly lost on offense, generating just a pair of touchdown passes from Joe Burrow when they already trailed 25-0.

“It’s easy to see what this one comes down to, where that segment of the game got away from us,” said head coach Zac Taylor after the game. “This isn’t the type of team we are. It’s a 17-game season, and this is one game that we weren’t at our best in any phase. I’m confident that’s not who we are, that we can make the corrections and flush this one away quickly, turn our attention to Carolina on a six-day week and have a great opportunity to get this out of our system real quick.”

A pair of turnovers, along with a missed field goal late in the second quarter, contributed to Cincinnati being held scoreless in an opening half for the first time since Week 4 of the 2021 season. A Cleveland field goal at the end of the first half followed by consecutive touchdown drives ballooned Cleveland’s lead from 8-0 to 25-0 midway through the third quarter.

Burrow threw two touchdown passes in the fourth quarter, a 13-yarder to Tyler Boyd and a 41-yard go route down the left sideline to Tee Higgins, but it proved to be too little, too late. The Bengals’ best chance to climb back in the game was following the Boyd score, when the defense forced Cleveland into a third-and-nine at their own 36-yard line.

“We’re not panicking,” Burrow said. “We know what went wrong in each game. We’ll go back and watch the film, make our corrections on this one just like we always have, and come back out firing next week.”

Cincinnati and Carolina are preparing to face one another for just the seventh time overall and the first time since 2018. The last time the teams met in Cincinnati they fought to a 37-37 tie, the highest-scoring tie in the overtime era. Carolina leads the series, 3-2-1.

Here’s what to look for in Game 9:

Prior to last week, Cincinnati was explosive offensively in two straight wins against NFC South opponents, with Burrow passing for at least 300 yards and three TDs in each. The Bengals currently rank in the top half of the NFL in passing offense (sixth, 268.0-yard average), total offense (13th, 349.0) and scoring (13th, 23.3-point average). Burrow is leading the NFL in passing yards with 2329 yards. He has 17 touchdowns and nine interceptions. He’s been sacked 29 times, second behind Justin Fields’ 31. The Panthers’ defense is allowing 358.6 yards per game (21st in NFL), including 232.2 passing (20th). Last week, Marcus Mariota completed 20-of-27 for 253 yards and three touchdowns. He was intercepted twice and sacked twice, indicating that this Panthers defense is likely to take chances on making interceptions and getting to the quarterback with their pass rush.

Horn, the first-round eighth overall pick of the Panthers in 2021 out of South Carolina figures to get his work against Higgins in this game. Horn returned last week against Atlanta after missing the previous two weeks with an ankle injury. Higgins had one big play last week against Cleveland, the 41-yard touchdown in garbage time. But those 41 yards accounted for most of his production as he caught only two other passes for a combined eight yards. He was targeted just six times, with three catches. Those numbers have to improve this week.

Myles Garrett had his way against Jonah Williams on Monday night. He had 1.5 sacks, a strip, a tipped pass on an RPO at the line of scrimmage and completely disrupted the Bengals offense. Brian Burns, with eight sacks coming in, is totally capable of doing the same if Williams and Collins aren’t on their game. Wilks will move Burns all over the defense because he’s capable of incredible pursuit. The Bengals top priority against the Panthers should be accounting for No. 53 wherever he is on the field. Collins is questionable after missing Thursday and Friday with an illness. Hakeem Adeniji fills in at right tackle if Collins misses his first start of 2022.

The Bengals need the return of Eli Apple this week to be a solid one. With Chido Awuzie gone for the season, Mike Hilton out with a finger injury and Tre Flowers nursing a hamstring, Apple and Taylor-Britt are left to defend the perimeter. Taylor-Britt showed good bursts of speed, which is what they drafted him for out of Nebraska. He actually got his hand on the ball he gambled on that Donovan Peoples-Jones burned him for on a 37-yard first quarter grab. He likely won’t make that mistake again. DJ Moore, as mentioned above, had a big game against the Falcons, catching six passes for 152 yards, including the game-tying touchdown late, before ripping off his helmet.

The third-year free agent out of Utah State makes his first start at nickel corner in place of Mike Hilton. How much help will defensive coordinator Lou Anarumo provide? Will Anarumo go with a softer look at the start, with an emphasis of keeping the play in front of them and forcing PJ Walker to take shorter completions? Hilton promised Friday that he’d be back by Nov. 20, the game after the bye in Pittsburgh. This is Davis’ shot at making an impact. He also could be asked to blitz off the edge like Hilton does and most importantly, he could be asked to help in run defense against D’Onta Foreman, the running back who had a big game against the Bengals in the divisional game against the Titans.

The Bengals veteran punter did not enjoy a good game on Monday night against Cleveland. He had four punts, a net of 34.0, one inside the 20 and a 23-yarder on Cincinnati’s second possession. If he wants to hold off Drue Chrisman, this is the game Huber needs to show he’s got something left in his leg. Hekker, on the other hand, is having another great season as Carolina’s punter. He is fifth in the NFL in net average at 44.1 yards per punt. Bill Belichick once famously called him “a tremendous weapon… one of the best I’ve ever seen at the position.”

If the Bengals intend on being a factor in the second half of the season after the bye, they need this win. It’s going to be 72 and sunny, pretty incredible for a Nov. 6 day in Cincinnati. Joe Burrow and the passing game needs to wake up. Also, the run game, whether out of RPO or under center, also needs to be better and should be against a front that is allowing 126.6 yards per game. If the Bengals want to neutralize Brian Burns, then establishing an attitude at the line of scrimmage would be a great place to start. It was sorely lacking against the Browns Monday night and when Burrow got picked off late on the first series, the offense went into the trash can. That can’t happen Sunday. They need a repeat of the attitude they had against Atlanta, where they raced out to a 21-0 lead and really were never threatened. Here’s thinking they pull out of the Monday night funk and head into the bye with the feel-good vibes that were all over the Bengals locker room on Friday.