What I Loved and Hated from Celtics’ Win vs Pacers

How the Celtics won vs the Pacers even through some lower moments nobody loved. 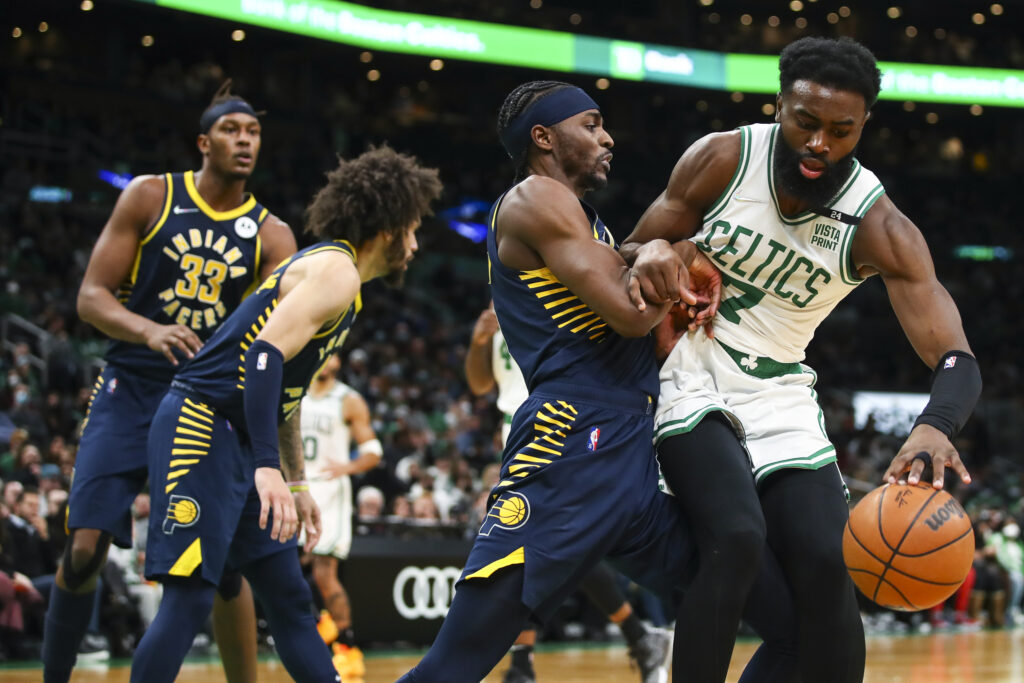 BOSTON, MA - JANUARY 10: Jaylen Brown #7 of the Boston Celtics drives to the basket while guarded by Justin Holiday #8 of the Indiana Pacers during a game at TD Garden on January 10, 2022 in Boston, Massachusetts. NOTE TO USER: User expressly acknowledges and agrees that, by downloading and or using this photograph, User is consenting to the terms and conditions of the Getty Images License Agreement. (Photo by Adam Glanzman/Getty Images)
Share
Facebook Twitter Email

BOSTON — The Celtics stole a second straight win over a short-handed team, overcoming a late deficit after leading by 10 points multiple times against the Pacers. Boston won in overtime, 101-98, winning a second straight game while losing Marcus Smart (thigh) to injury and seeing long offensive droughts from Dennis Schröder and Al Horford continue. Against a team courting Lance Stephenson, Torrey Craig and Oshae Brissett late, it didn’t count as an emphatic win, but the Celtics again showed stylistic improvements in spots.

Here’s what I loved

1. Jaylen Brown setting up a play to save the game down by four with 37 seconds remaining.

Jayson Tatum initially drove and broke down the defense, opening a second-level drive for Brown to attack the Craig close out. That’s playing off each other, part of a 31-pass effort between two players. Brown fed Tatum for two of his six assists.

Play of the game tonight. Brought the #Celtics back from the dead.. pic.twitter.com/GCc0FbWynX

It initially looked like Brown would lose control of the ball in the lane, but on this night he played a clean game in 43 minutes. 0 turnovers. He held onto the ball and, against a wall in the post, found Robert Williams III for two critical free throws on the back line. He’s finding Williams III more consistently lately, and Williams III drained both at the line as part of a 6-for-6 night at the line. Williams III shot 63% at the line in December, and hadn’t gotten there once in five straight games before Monday.

As for Brown, who carried massive weight with 26 points and 15 rebounds, his initial try at low-post move against Indiana’s front court fared worse than the one that mattered more in overtime.

2. Williams III saving the first half with offensive rebounds, and the game with deflections

Williams III continues to play some of the best basketball of his career over his past nine games, averaging 11.6 points, 10.9 rebounds (4.7 offensive), 3.1 assists, 1.3 steals and 3.6 blocks per game. That’s some of the best all-around production by a center over that stretch period. He deflected six passes and contested 16 shots in Monday’s win on defense, starting the game chasing down the wide array of misses on offense through a 39% start.

Williams III practically jumped over Sabonis and Indiana’s other players that tried to box him out. He handed Boston two extra possessions with Smart unsuccessfully trying to shake loose Boston’s offense during a horrendous 8-for-22 second quarter. The third try didn’t take long to go down, Rob meeting the ball above the rim.

Indiana took Williams off the pogo stick in the second half and prevented him from grabbing another offensive rebound period until overtime. He remained effective, dishing 43 passes, mostly to Tatum in handoff actions. Boston put the ball in his hands early and often, running a nice fake screen action to clear the lane to the left wing, then sending him downhill past Myles Turner.

Finally, Rob’s second-half defense both stalled Sabonis’ scoring ability in the post (0-for-2) and wreaked havoc on a Pacers offense overall that barely got off the ground when the Celtics didn’t spark them with turnovers. Watch Williams read the progression of this play and turn on the jets, swiping Stephenson’s heave ahead of Turner and drawing the clear path foul.

“You’re seeing that consistency become more of the standard game-to-game, so we’re loving that part,” Udoka said. “We can play with him on the big, and be in pick-and-roll, or off-ball, which we’re starting to mix in more, where he can be a weak-side shot blocker. I think he’s really thriving in that role, switching with the smaller big on the ball. He’s been more consistent and that’s great to see overall.”

A lineup Celtics fans begged for against the Knicks last week as Boston collapsed ahead by 25 points came to fruition and sealed the win. Smart (thigh) exiting amid a third quarter run after a collision with Sabonis and Schröder starting the game 0-for-4 from the field opened the door for the Celtics to go from two point guards to a no point guard lineup late.

“Grant was defending well,” Udoka said after the game. “Both the guards and the bigs. So we went away from our double big lineup, even though they were playing bigs a lot. Grant can do both, and then we wanted more size overall, so we had JRich out there over Dennis for defensive purposes. I think with he, Jayson, Jaylen, that length out there served us well toward the end.”

The unit opened up offensive options for Tatum against the blitzes Rick Carlisle threw at him in the fourth quarter and overtime. Particularly the corner pocket pass that led to two quality looks that Williams failed to make. That lends credit toward Udoka’s recent comments about the bench shooting not necessarily being an answer given the percentages, ultimately handing his critics a bigger win. Richardson and Williams changed the geometry of the floor for Boston late. This play set up the decisive bucket from Brown to Tatum.

This play, perhaps Brown’s most impressive as a facilitator, and another critical make considering the three-point foul the Pacers would draw before the game ended. Boston’s five-man closing unit outscored Indiana by 11.4 points per possession over nine minutes (105.9-94.4). They shot 50 eFG%.

4. Everything Domantas Sabonis did with 11 points, 23 rebounds and 10 assists.

He’s an offensive machine from the big man spot, flashing dazzling passes from the post with ease and being robbed of more assists by the shooting and talent around him. Indiana was down Chris Duarte, TJ Warren, TJ McConnell and Malcolm Brogdon on Monday. I’ve written he could be the solution for glueing together Brown and Tatum if the Celtics could ever acquire him.

Sabonis started 0-for-5 in the game and didn’t score well. He’s been trapped in an awkward fit next to Turner and forced to defend fours, while largely carrying the weight of everything the Pacers try to do offensively. He makes the best of it, grabbing this offensive rebound and settling right into post-up position before he finds Craig.

Sabonis is averaging 19.1 PPG, 12.0 RPG, 4.6 APG and 1.0 SPG this season, taking steps defensively and awkwardly transitioning to a hybrid spacing-post creation role. Turner has voiced concerns about his role next to Sabonis, and the The Athletic originally reported Indiana’s willingness to move on from one of the big men. Turner didn’t play late in the fourth quarter and shot 2-for-7 with six points, two steals and three blocks (-12) in the loss.

I’ve been thrilled to see Brissett break into the NFL since 2019 with Toronto and its G-League system, and now Indiana. He shined late last year as a scorer, and broke out in transition for what looked like the decisive three-point dunk over Tatum one the break. I covered Brissett’s two seasons at Syracuse from 2017-2019, where he had arguably the best freshman season for a forward since Carmelo Anthony. He’s a native of Toronto.

What I hated from the game…

1. Dennis Schröder blowing off more offensive activity the Celtics were trying to generate

Since Dennis Schröder scored 31 in Portland near the beginning of December, he’s averaging 39% FG, 22% from 3 and 11.7 PPG in his last 11 games. The Celtics have sat him in crunch time over their last 2 wins, and mercifully so as they try to establish a productive offense. Schröder still does good as a penetrator, scorer, passer and he isn’t a liability defensively. Sometimes, in spots like these, his spot on the floor becomes untenable. He air-balled his first two shots, then took this attempt.

He’s taking more contested two-points, getting to the rim more often and isn’t providing any floor spacing to the offense. As Brown takes on more play-making responsibilities, the prospect of Schröder getting moved makes more and more sense, whether due to his play or his contract situation (one-year deal, limited to $7-million annually if he re-signs here). Bobby Marks suggested Schröder to Dallas for two second-r0und picks.

Payton Pritchard is questionable to return from COVID on Wednesday in Indiana. He shot 38.1% from three during six games of extra opportunity with Schröder out during late-December, and could breath fresh life into lineups with his ball-handling, pace and shooting.

2. Jaylen Brown getting on Grant Williams into timeout…

Brown clapped his hands incessantly into a timeout late in the third quarter. It looked like on the play Grant could’ve helped Al Horford on the weak side. Brown ends up helping from the weak side corner, falls over in traffic and Craig hit an open three from Sabonis.

Looked like this was the play Brown was upset about. Not sure what Grant could’ve done. https://t.co/nYQNBHyVYw pic.twitter.com/wXzkV4qvQk

Communication is good and the Celtics quickly figured things out, Williams III pulling Grant away and Schröder pulling Brown from the confrontation. Tatum strolled over slowly from the exercise bike, not great visuals as the Pacers stormed back during the second half. Udoka has looked for leadership and someone to prevent spiraling in high-leverage situations. Brown came through in that spot, but initially throwing this play on Williams wasn’t great.

“We’ve been in enough of these situations to start to show some growth and improvement,” Udoka said. “Ugly win and we’ll take it. I’ve been on the wrong side quite too many times.”

Tatum rode the bike earlier in the season as he struggled offensively, seemingly signaling a physical ailment. I asked Udoka about it and he pointed toward Tatum wanting to stay warm and loose. Now, Tatum often goes to the bike to unwind when he exits the game, not pedaling. Richardson quipped about Tatum spending time there.

It’s hard to tell whether this matters or not. It is odd though, and I can’t think of another player who’s done the same. It definitely prevents Tatum from talking with his teammates when he gets off the floor, and with Udoka trusting him to figure out the offense as a playmaker it’d make some sense to have some communication while Boston stalled on that end through much of Monday’s game with turnovers. Tatum kept returning to the bike.

“I know there’s a lot of people out there that have their opinions on how I should lead or my demeanor or things like that,” Tatum said at the end of last season. “The cool part is that doesn’t matter. I get to be myself and not really have to listen to how people think I should lead … I know what I bring to this team from that standpoint and how I communicate with guys out there and in the locker room. So, yeah, I’ve made strides regardless of what people outside think.”

As for the Brown and Tatum combination, it’s encouraging to hear and see them trying to make it work. Passing directly to each other. Screening for each other. Since we documented their low number of passes to each other, they now average 11.4 passes per game between each other, up from 5-6 prior.

It’s a process, one they’re beginning to buy into and making strides in, but can Tatum handle being on the wrong end of the performance ladder when Brown is rolling on the ball like on Saturday and Monday? His Kendrick Perkins spat and the bike-riding weren’t encouraging in that regard.