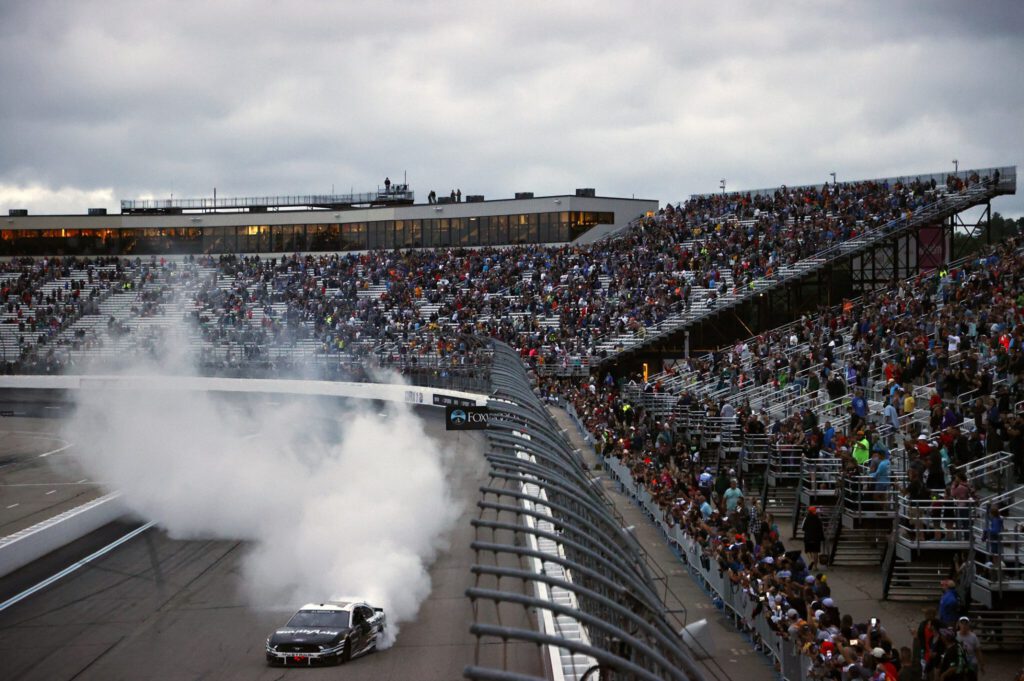 Aric Almirola won the darkness-shortened Foxwoods Resort Casino 301 on Sunday afternoon to lock himself into the Playoffs.

The race began in a mist, which turned into a hard rainfall just six laps into the race, causing the race to be red-flagged for almost two hours.  Without lights at the New Hampshire track, NASCAR decided to call the race official eight laps from the scheduled distance due to darkness.

Almirola was ahead of Christopher Bell when the race was called, and he picked up his first victory since 2018 in what has been a difficult year for the veteran driver.

Almirola said it’s a testament to his team for continuing to fight through all the adversity that mired him outside the Top 20 in points.

“Everyone that works on this car…just keeps fighting,” Almirola said.  “There have been so many people who have continued to support us through the crappiest year ever.”

Almirola’s previous two career victories came at Daytona and Talladega, and he said he was glad to finally win on a non-superspeedway.

“I had this race won a couple years ago and I gave it away,” Almirola said.  “For so long we’ve been so close to winning at some of these racetracks…and I’ve let it slip away.”

“This feels so good to have something pay off for all the hard work.”

Bell was closing in on Almirola while the leader struggled with lapped traffic, but Bell ran out of time to get to the back of Almirola.

Bell said he hoped the race would go the scheduled distance and may have had something for Almirola with those extra eight laps.

“I didn’t know how many laps they cut it short but…saw that we were eight laps short, it stings,” Bell said.  “I feel like I probably had a little bit better pace than him and I was able to get to him.”

“Lapped cars were giving him a hard time.  It was going to be a heck of a race.”

Almirola’s victory locked him into the Playoffs, and that caused the cutline for the final spot to tighten up. Heading into the race, Richard Childress Racing teammates Austin Dillon and Tyler Reddick were in the Playoffs by over 100 points, but they are now separated by just five points, with Dillon on the outside looking in.

Teams on the bubble will use the upcoming two-week Olympic break to get ready for the final four races before the Playoffs begin.