The Celtics need to back Ime Udoka on the court and behind the microphone as he tries to build his systems and culture through early struggles. 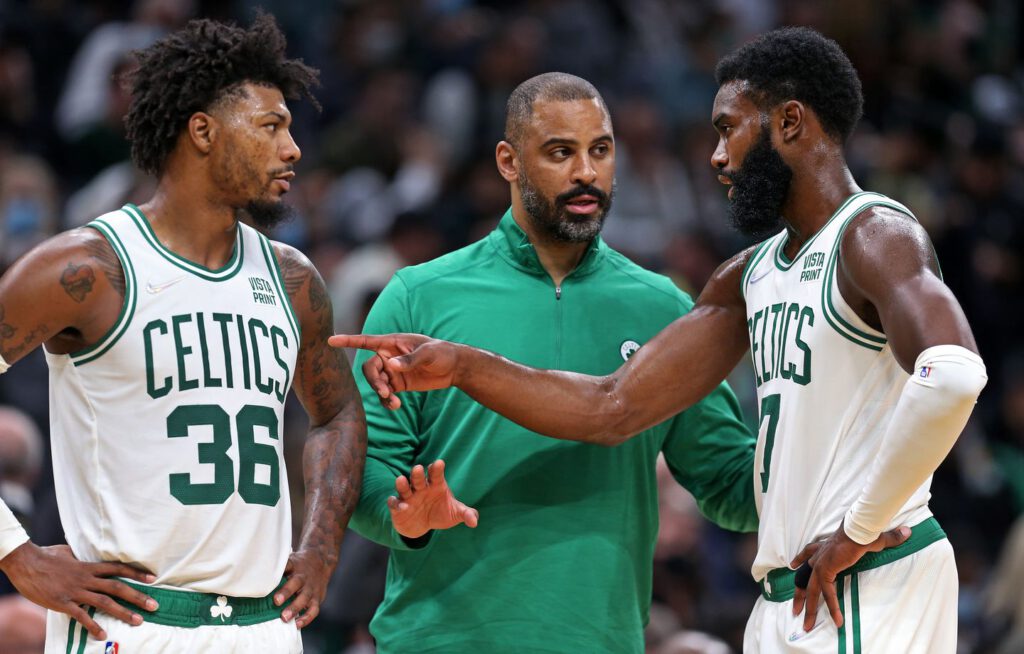 When Jayson Tatum did, it centered around Boston’s frequent slow starts in games, which led to frantic late comebacks. Effort, energy and consistency have become constant topics around Boston after an East Finals appearance in the bubble.

“It’s not (Stevens’) job per se, I feel like, to get us riled up,” Tatum told Stephen A. in March. “Those games where we come out kind of slow. We’re all professionals, we’ve all been playing basketball for a really long time. His job is to have us prepared, and you really can’t coach energy.”

Those same concerns have emerged surrounding Boston’s 2-and-3 start this season, with the Celtics struggling to explain effortless losses to Toronto and Washington at home. Ime Udoka, a new coach, hoped to address consistency with the communication and relatability the players desired, initiating conversations about his expectations on day one.

However, the team hasn’t consistently met them since, forcing the new voice of the Celtics into a delicate balancing act of criticizing and disciplining his players while acknowledging challenging circumstances. He’s already given the team a Stevens-esque reminder of needing to respect opponents, which concluded a tumultuous Wednesday.

Nearly five months after Danny Ainge retired and Stevens left his role, Udoka started the day updating his search for captains. He hadn’t thought much about it, pointing toward a greater focus on lineup-building due to preseason injuries. In fact, the Celtics never showed much enthusiasm toward one of Udoka’s earliest ideas as a new coach — assigning two leaders.

Marcus Smart took the podium directly after Udoka introduced it in camp and dismissed the importance of captains. Jayson Tatum joined him in agreement later, and Jaylen Brown deferred his candidacy to Al Horford. None of the pillars sounded enthusiastic about being a captain. Now the idea’s effectively dead.

“That kind of took a back seat when things happened in the preseason,” Udoka said. “Now I’m more prioritizing us getting back on track, getting guys healthy and getting our lineups together … what I did mention was guys leading in several different ways. Marcus, Al are probably the more vocal guys, Jayson and Jaylen do it with their play more so than speaking. A lot of guys contribute and if they all bring what they bring, I’m more happy with that than having to designate captains.”

Udoka suspended Smart during the preseason for breaking a rule the new coach clarified he established early in his tenure, missing a team flight. Udoka also implemented a no-complaining to the refs edict the team hasn’t consistently followed. Tatum has received two technical fouls in the team’s first five games for complaining to the officials but Udoka didn’t bench Tatum like he did Grant Williams in the preseason. A threat with no follow through means that rule is effectively dead.

The team hasn’t supported its new head coach enough through words or actions. They wanted to be coached tough, but haven’t hardened themselves through adverse moments or shown attention to detail on Udoka’s philosophies. Even little things like Brown calling himself questionable minutes after Udoka told the media he’d be ready to go for opening night came off as odd. The same minor details undermine the team on the floor, like careless turnovers via no-look passes or praying Robert Williams III can pull down any lob.

Udoka acknowledges COVID and lineup turnover has challenged his players, while noting other teams have overcome adversity too. Despite Udoka’s honest, straight-shooting style, it’s felt like the group hasn’t been able to handle a full heavy-handed approach yet.

Then, the Celtics mailed-in their shootaround on Wednesday prior to a home game against the Wizards. Udoka told them they’d get their asses kicked if they approached the game the same way, and he saw them do so for three quarters, less than one week after a boo-filled, 32-point loss in their home opener. Part of the team’s plans for the walkthrough involved slowing Montrezl Harrell. Boston’s defense went on to allow him to shoot 10-of-13 with 25 points and 11 rebounds against little resistance. Udoka revealed the morning disaster unprompted post-game.

“The focus that I’ve been mentioning, it really comes across all areas,” Udoka told CLNS Media on Friday. “We dig into the personnel and lot of times if (Harrell) wants to get to his right hand or get back over his left shoulder, and he continually gets there, that’s something we’re not focused on with personnel. So we hit that 2-3 throughout the day before we play a team, and so that’s a lack of focus there, or not being in the proper spots in help defense. That’s basically the guy being a weak side dunker and you’ve got to take one step across to help your teammate and you don’t do anything. That’s a lack of focus there. So it comes across in a lot of areas. I felt it wasn’t sharp in shootaround the other day, but that was a one-off in my mind. We’ve been solid overall.”

Elsewhere, waning focus is apparent in a 72% free throw clip for Tatum after a 90% mark in the playoffs and 83.8% start to his career. Brown’s overall inconsistency and mixed involvement caught Udoka’s attention, which he responded to with some play calls to get the star energized. He called Brown’s array of starts in games mind-boggling, ranging from an explosive opener in New York to an invisible stretch against Washington. Udoka acknowledged COVID’s possible impact, while asserting Brown needs to find juice from the start.

The criticism hasn’t caused Brown or Tatum to chafe. Tatum acknowledged his need to not get caught up in officiating and allowing poor offense to impact defense. Brown agreed with Udoka’s mind-boggling assessment at Friday’s practice. Still, the Celtics can’t find answers for questions about their motor into a fourth straight season with some level of turbulence. It rings familiar for Horford, who departed Boston in the wake of 2018-19’s dysfunction.

“It’s happening right now early in the year and it’s something we have to take care of … I’m trying to figure it out myself,” Horford said. “We should never be questioning energy and effort. That should never be something. We’re playing for something big here and we just have to make sure we’re all on the same page and we’re all committed to it.”

Smart, Horford and Dennis Schröder set energetic tones during their early-season minutes even through shooting struggles, an illness in Smart’s case, COVID in Horford’s and an uncertain role for Schröder. He embraced coming off the bench to start the year, then thrived and created offense in spot starts. Even those three could do more to create more streamlined messaging in line with their head coach.

Smart faced the media in the aftermath of his suspension without actually addressing it. Horford didn’t know why he played only 26 minutes on Wednesday, pointing toward Udoka possibly wanting different looks while trailing, and Schröder complained about switching defense being difficult in camp as someone who’d never switched that much. Robert Williams III, by comparison, affirmed his ability to play any defense Udoka throws at the team.

That defensive commitment remains an area of improvement for everyone, as Udoka stresses switching early while leaving the door open to other looks later. They’re building something, not necessarily married to it, as Udoka described this stretch as an extended preseason. The Celtics haven’t thrived defensively despite having a unit that looks good on paper for the second straight season. They rank 22nd in defensive rating, 28th in defensive rebounding percentage, 24th in fast break points allowed and 28th in paint points allowed.

“It’s not just about the effort. There are techniques, there are systems, there are coverages, there is communication,” Stevens said on 98.5 The Sports Hub on Friday. “If you want to be a reasonable defense, you can give great effort and be average in those things. If you want to be a great defense, then you give great effort and you’re great in those things. We do have enough guys here to be a really good defense, but right now, our transition and defensive rebounding isn’t as good as it needs to be.”

Why continues to elude everyone in Boston. Why does the team struggle through adversity? Why do they lack possession-to-possession consistency. Even as they address the same questions over and over again, going on two years, how does little seem to change for a franchise now playing .500 basketball over its last 94 regular season games? Even Kemba Walker didn’t know.

It starts with commitment to the little things, like backing the new coach’s philosophies on the floor and messaging  behind the mic. It would go a long way toward at least building cohesion, as Schröder did Wednesday.

“It’s five games in,” Schröder said. “We’ll try to find our way, but for sure we’ve got to start on defense … when we got stops, we’ve got a hell of a group, fast group, we can push the pace, get wide open shots … somebody’s going to be open, we’ve got to find the open guy there, it starts with me and everybody else. We’ve just got to be better.”