Is Trading Dennis Schröder a Mistake?

Dennis Schröder may be traded by the Celtics before the deadline. The type of trade is important in choosing whether to let go or not. 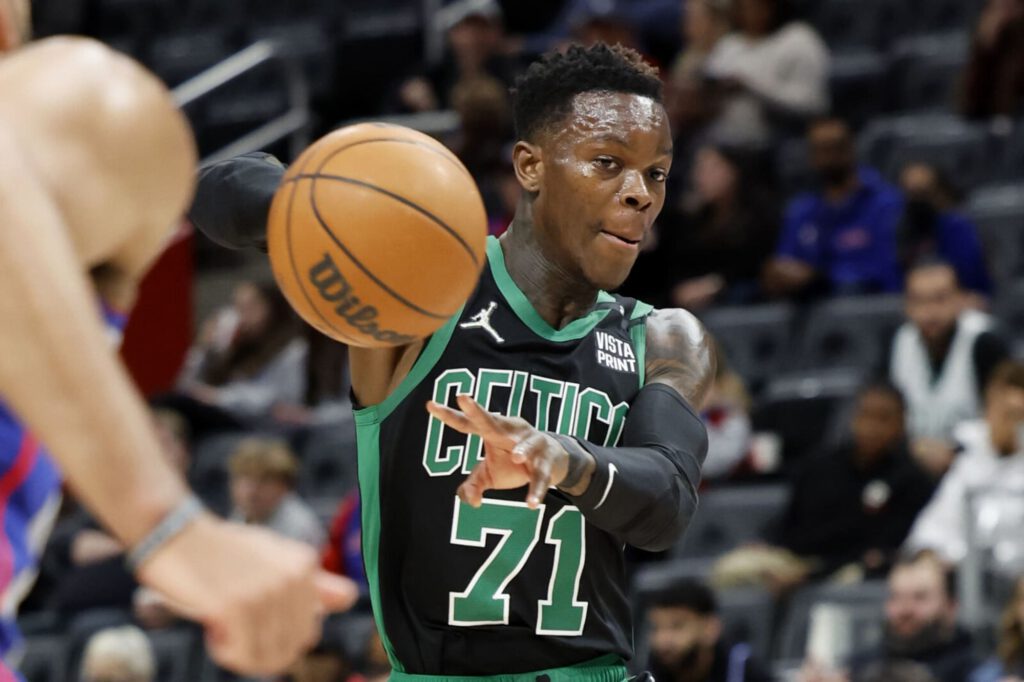 Dennis Schröder kicked the cover off the hoop for the Celtics this season when it seemed screwed on. His performances largely split — good and bad — along starting and bench roles. He paired with Marcus Smart in Ime Udoka’s most frustrating rotations. Through injuries and COVID cases, he helped uplift the offense early in the year, struggled shooting from deep, finished routinely inside, racked up assists, but also roved defensively and waved off teammates on offense.

The Schröder experience could end before Thursday’s 3 p.m. NBA trade deadline, as numerous reports signal the Celtics are looking to move on and garnering interest from several teams. He scored 22 points, four rebounds and two assists on 8-for-15 shooting in Orlando on Sunday, finishing 4-for-8 from three, before what could be his last game with Boston on Tuesday in Brooklyn.

The Celtics beat the Magic for their fifth straight win, 116-83, and Schröder reminded Boston that, for all his frustrating tendencies and brutal stints in wins over Miami and Charlotte earlier in the week, he’s a scorer on a team that sometimes struggles to do so.

“I been hearing this for nine years now. Whenever it happens, it happens,” Schröder said post-game regarding trade rumors. “It is what it is. It’s a business, but I like the guys, the organization … so when I go somewhere else, that’s how the business goes. I love the guys here, and if I’m staying here, that would be better.”

Numerous considerations beyond fit land Schröder’s name in trade rumors. The Celtics sit close enough, if Jaylen Brown’s incentives hit, to the luxury tax line that moving off Schröder’s $5.9-million salary would guarantee Boston avoids being a taxpayer. Combined with his lack of Bird Rights that cap the Celtics’ offseason offer to him at $7.1-million for 2022-23, recouping assets for Schröder may be wise if removing him from the lineup doesn’t drastically alter the team’s contention ability.

The Bucks, according to Matt Moore, and Bulls, per numerous reports, appear to lead the Schröder suitors given their second unit needs. The Clippers also opened up a second unit lead guard role when they traded Eric Bledsoe to Portland as part of their acquisition of Norman Powell and Robert Covington.

“Right now, we just got to figure out the second unit,” Tyronn Lue said Sunday after the Clippers’ loss to Milwaukee on Sunday.

Moving Schröder, given the unlikelihood he’s with the Celtics next year, for a first-round pick or player with more staying power would be a forward-facing move. Even a second-rounder or two could be useful. An outright dump would make less sense, Marc Stein reporting Boston prefers to bring no salary back, which only the Dallas Mavericks or Oklahoma City Thunder would be able to pull off. The Mavs have been connected to Schröder, as have the Knicks, and the Cavaliers before they traded for Caris LeVert, sending out my hypothetical return for Boston in a Schröder swap.

While the Celtics are years from repeater tax penalties, there are some conceivable benefits to them avoiding long-term salary at this trade deadline, like LeVert or Powell’s deals. If Boston wants to execute a sign-and-trade this summer for any impending free agent, they need to position themselves below the hard cap such a move would demand the Celtics be below. Dumping Schröder’s expiring deal isn’t necessary for that, and if Brown’s incentives don’t hit, Boston only needs to dump Bol Bol or P.J. Dozier’s contract to avoid the tax.

Moving Schröder could be a combination of on-court adjustments, while making tax avoidance a slam dunk. Udoka’s propensity to lean on Schröder in closing lineups, particularly over Josh Richardson, who’s shown to be effective in Al Horford’s slot alongside the starters late in games like on Wednesday against the Hornets, only seems adjustable by removing Schröder.

The same goes for involving Romeo Langford, Payton Pritchard and Aaron Nesmith, who aside from a few ancillary Langford minutes are outside the rotation since the Celtics became healthy. Richardson, Langford and Pritchard could string together the second unit guard minutes, open the door for Nesmith to have a chance to do anything this year, while Jayson Tatum or Brown usually stagger with the bench as ball-handlers anyway.

Schröder, brought to the Celtics to play a bench role, is averaging 18.6 points and 5.0 assists per game on 48.6% shooting in 25 starts. In 23 games off the bench, he’s averaging 9.9 PPG and 3.5 APG on 36.2% shooting. That renders him more than replaceable when Boston’s fully intact. Pritchard would bring needed shooting off the bench and can reach that playmaking threshold, while pushing the pace like Udoka wants.

“I’ve seen (Pritchard) in high school win state championships. Watched him in college and have extreme confidence in him, knowing when he gets the opportunity, he’s always going to be ready,” Udoka said in December.

Any Schröder dump would leave the Celtics seven deep unless a young player like Pritchard steps up. Any Smart ailment would line Pritchard up for spot starts, where he’s shooting 32.8% from the field and 30% from three in six tries during his career. Pritchard is a 43% shooter and 40.7% from deep in 103 games off the bench.

Boston would be banking on full health if they want to make a postseason run, or need to find outside insurance. A hypothetical Bulls trade would send Troy Brown Jr. to the Celtics for Schröder, who’d be ready for spot starts.

A Schröder dump would still be more of a reversal than choosing a direction, akin to past moves like the Tristan Thompson and Enes Kanter trades. It is easy to imagine Brown and Tatum’s second unit minutes running more smoothly with Pritchard to drive-and-kick to though, without Schröder isolation sets diverting from the ball movement and quick decisions Udoka is trying to implement.

Udoka admitted to CLNS early this season that Schröder had a de-facto exception from his 0.5-second pass or shoot rule due to his scoring prowess. Stylistic clashes considered, his removal wouldn’t solve all of Boston’s problems, or begin to address them.

It’s fine to admit Schröder didn’t work and move on. The Celtics, following 12 wins over their past 16, will inevitably miss those nights when Schröder finds his way to the net or hits some open threes while nothing is falling  Schröder hasn’t been their only struggling shooter. He’s stolen wins as a professional scorer breaking down defenses that need to account for him. There’ll be inevitable bumps relying on young, unproven players in his role.

Maybe they’re worth riding to see what Boston has in those young players, but what if Udoka simply pivots to an  seven-man rotation? Would the Celtics need to move off more than Schröder for a more wholesale youth movement?

That appears unlikely, so while trading Schröder may be the right move, bringing back point guard depth and assets makes more sense than an outright dump. These Celtics look poised to compete. They’ve clicked, meshed and their players have bought into Udoka’s methodology lately, a major goal of his first season. Removing Schröder may not derail the good vibes. It could make things harder when the team isn’t whole.

“We’ve got two guys who can really score in isolation, but we don’t want to always depend on that,” Udoka said Sunday. “Guys are trusting each other, finding each other and enjoying playing together … I think that’s where you’re seeing us grow … regardless of who we’re playing … schemes and coverages will change night to night … (but) we want to be who we are. That’s the consistency we’re looking for.”