The latest development in the Kevin Durant trade demand should give the Celtics pause over pursuing the star, who made powerful organizational demands. 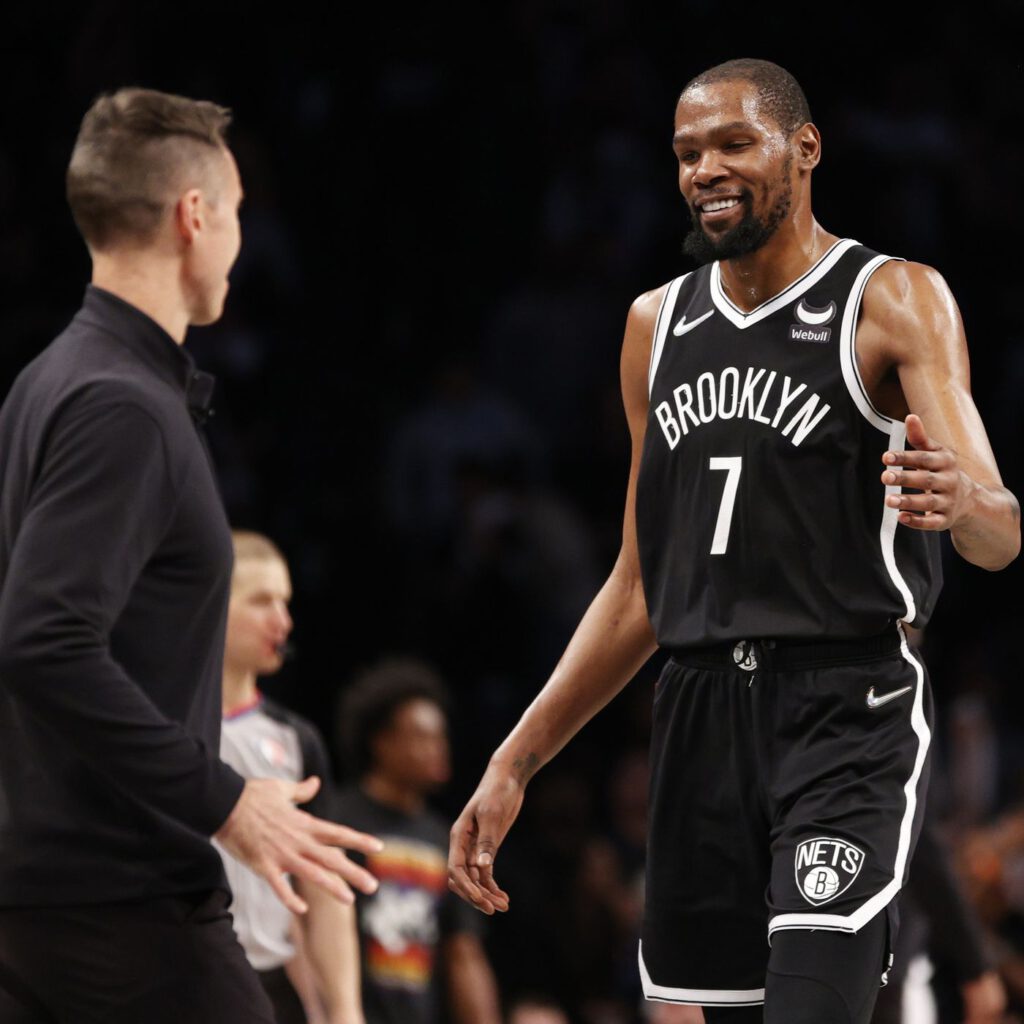 The Kevin Durant trade saga entered month two with a London meeting between the star and Brooklyn Nets owner Joe Tsai on Saturday. Rather than set the stage for a reluctant return this fall, The Athletic reported an escalation of Durant’s demands ahead of the start of his four-year extension with the team. Durant, Shams Charania wrote, told Tsai to trade him or fire both head coach Steve Nash and general manager Sean Marks.

It’s a startling request given Durant’s longstanding relationship with Nash, apparent role in the ousting of former coach Kenny Atkinson that led to Nash’s ascent and Marks’ willingness to roll with Durant and Kyrie Irving’s suggestions. It’s a decision that reflects poorly on Durant’s leadership and accountability, and the Nets’ ability to reconvene successfully. Durant’s continued insistence on a trade, seeking a change of scenery, along with Charania again reporting the Celtics are a significant candidate to land him kept the prospect of the significant change in Boston alive. Durant’s latest instance of organizational meddling should give the Cs pause.

Any case for the Celtics to mull trading Jaylen Brown for Durant to give the Celtics a greater immediate chance at winning one or multiple championships hinged on being able to retain much of the team’s core. Durant would pair with Jayson Tatum, while the team’s reported package of Brown and Derrick White would’ve maintained Boston’s back court of Marcus Smart and Malcolm Brogdon, and its big man trio of Robert Williams III, Grant Williams and Al Horford. That team would be the prohibitive title favorite.

Charania, however, noted the Nets’ insistence that suitors include every last asset for Durant. That should be a non-starter for a Celtics team that already swept Brooklyn and won two games in the NBA Finals, with its core signed for the foreseeable future. Any concerns over Brown’s future were always secondary to the immediate talent upgrade Durant would’ve given the Celtics at the position. Boston has strong incentives to keep Brown in town beyond 2024, including salary advantages, competitive team and major role alongside Tatum.

Tatum has complimented Durant while indicating no preference toward the shakeup, but said it’s not his call, so there’s no desperation on the Celtics’ end, nor is there any around the NBA. It makes sense Charania noted the Celtics’ initial overture is seen as a viable one. If that wasn’t a hard offer, and Marks simply floated that Boston put Brown on the table to increase interest, that’s already a hindrance on these two sides getting a deal done. Reporting last month indicated that the Celtics and Nets weren’t close to a deal, while other suitors are limited in what they can offer due to Ben Simmons’ presence on Brooklyn as a designated rookie extension contract — each team can only have one of them on a roster. No Bam Adebayo, Devin Booker or Michael Porter.

The greatest warning sign against a Durant trade was never about age, decline, injury concern or the cost of acquisition though. This is the latest reminder of questionable leadership from the star, who alongside Irving arrived in Brooklyn insisting that the team also sign declining center De’Andre Jordan to a four-year, $40-million. Jarrett Allen’s starting role under Atkinson became a point of contention in year one even as Durant sat injured and Irving sporadically entered and exited the lineup. Before long Atkinson, who successfully rebuilt the team alongside Marks despite the damage of the Paul Pierce and Kevin Garnett trade, was gone.

Marks could be next, despite going along with Durant and Irving’s desire to consolidate the youth of the roster into a James Harden trade. His key finds and signings like Joe Harris, Blake Griffin, Jeff Green, Landry Shamet and Mike James helped fill the gaps in 2021 while a team increasingly reliant on its injury-prone big three hit a wall in round two against the Bucks. Then, when Irving became the only players across three rosters who decided not to show up for 2021-22 because of vaccine mandates in their city, the organization stood by Irving, eventually brought him back part-time and even reportedly lobbied the mayor’s office to rescind the mandate. All because Durant never wavered in support of his increasingly unreliable running mate.

Harden did, apparently losing faith earlier than anyone in the organization with the Durant-Irving era and asking out mid-season. With the team faltering due to a Durant injury, Irving’s status and Nash’s questionable coaching with the trade deadline looming, Marks pulled off a remarkable deal landing Ben Simmons, Seth Curry and first-round picks from Philadelphia. Simmons never took the court, adding to the late-season turmoil that culminated in a first-round sweep against the Celtics where both Irving and Durant struggled immensely.

Now, rather than look inward over the impossible expectations he and Irving thrusted on an inexperienced coach in Nash, the opportunity Marks has continued to provide this roster by re-signing Patty Mills and Nic Claxton, adding TJ Warren, trading for Royce O’Neale and drafting solid prospects like Cam Thomas and Day’Ron Sharpe, Durant is deflecting the blame elsewhere. Perhaps due to the Nets’ moves aimed at minimizing the influence of its stars going forward, whether refusing to extend Irving long-term or extending Marks weeks ago.

The Nets are now in an impossible position, dump Marks and inevitably continue this cycle or poor decisions to appease stars who may not even be around in one year, or effectively end this era by making trades under pressure after already relinquishing all their draft picks through 2028? The same Brooklyn team popular wisdom once held that you needed to avoid round one now seems on the verge of becoming a non-factor in the east.

The Celtics may want to steer clear of Durant and simply take advantage of that development. They, too, have questions offensively a strong playoff run didn’t alleviate. Turnovers and offensive stagnancy doomed their championship pursuit, and though the Brogdon addition helps those improvements will ultimately fall on Tatum, Brown and Marcus Smart, who all struggled to control the ball late in the postseason. Durant, at his best, would effectively alleviate those issues immediately upon arrival, while unlocking Tatum. The talent and basketball fit are enticing enough to still be worth assessing at the right price.

Any Durant concerns didn’t exist while he fit perfectly on championship Warriors rosters. The Nets experience has shown the Bill Simmons adage that it’s not all about basketball to fruition. The Celtics nearly lost their organization through the Irving experience and Ime Udoka, Brad Stevens as president, Tatum and Brown allowed them to save it. The Durant leap, as these latest demands show, would be another significant yield of organization power to a star in the hope of a championship that is never truly promised no matter the direction.