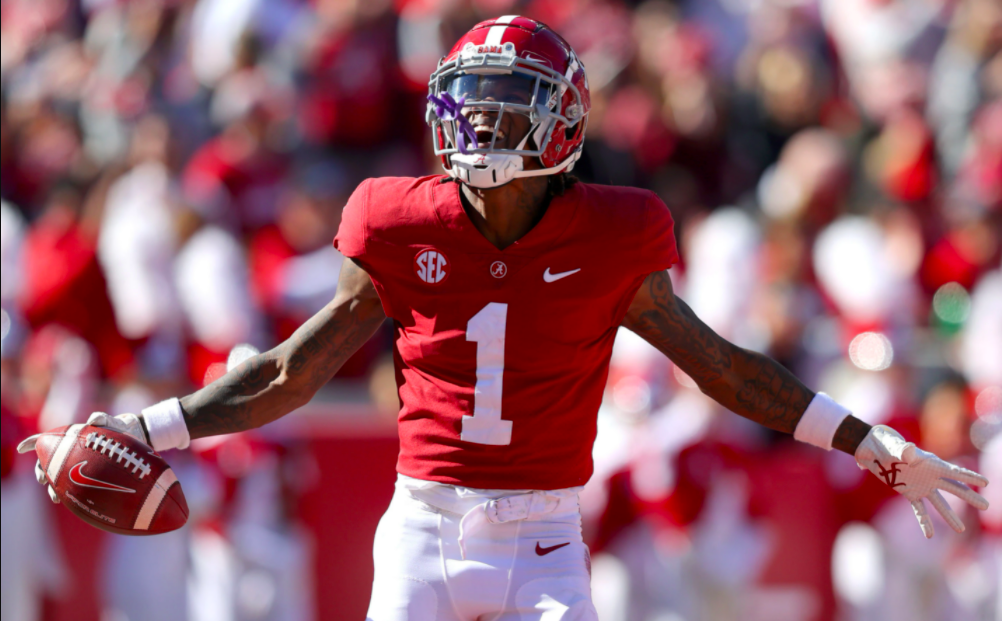 Above, are the prospects from our first four tiers that were ranked in the 11-50 range of our big board.

Here are prospect break downs on the top ten best Patriots fits and likely first-round targets in the 2022 NFL Draft:

With Bill Belichick continuing to load up on hybrid DBs, Michigan's Daxton Hill is a potential #Patriots round-one target:

– Covers TEs & over the slot with CB-like man coverage skills

Before you say the Patriots don’t need another safety, it’s important to remember that not all safeties are the same in New England. The Pats are loaded with box safety types such as Kyle Dugger, Adrian Phillips, and Jabrill Peppers. But there’s no obvious heir to Devin McCourty’s throne at free safety, and my pro comparison for Hill is the future Pats Hall of Famer. Like a young McCourty, Hill has the physical tools with smooth and explosive movements in coverage to hold up at cornerback. But will reach his potential playing a hybrid free safety role. If the Pats select Hill, one would expect that his career will look similar to McCourty’s, where he’ll play outside corner as a rookie out of necessity and then move to free safety once DMac retires. Either way, the Pats are getting a playmaker who fits their coverage system to a tee.

If you want the #Patriots to draft some speed and open-field tackling ability on defense, Washington CB Trent McDuffie flat-out flies. Wow. pic.twitter.com/b0Qe7k4aQZ

McDuffie has great traits to shadow speedy wideouts like Tyreek Hill and Jaylen Waddle down in Miami. His average depth of target faced was 8.8 yards, meaning he was defending mainly short throws, and he was tremendous at working through congested areas to make open-field tackles on ball carriers. However, due to a small sample size on deeper targets, McDuffie only had two career interceptions and didn’t have much tape to evaluate on deep shots downfield. The Pats need to think about matching speed-on-speed with the Dolphins and other teams they’ll face in the AFC, which is why McDuffie makes sense. Plus, scouts rave about his high football IQ and instincts in both man and zone schemes. McDuffie doesn’t fit the mold for an outside corner, but he’s one of the best pure coverage talents in the draft.

(#95 living in the quarterback’s face above)

Although we prefer Georgia teammate Jordan Davis, there’s a strong argument that Wyatt is the best interior defensive lineman in the draft. The best part about projecting Bulldogs into the Pats’ defense is how similar their rush principles are to New England’s. Kirby Smart’s scheme also asks defenders to prioritize rush lane integrity and gap control, with a playmaker like Wyatt often parking in gaps rather than flying off the ball. For some, it’s viewed as holding Wyatt back. For others, like Belichick, it could make Wyatt the perfect fit. Wyatt was capable of two-gapping or posting up in gaps against the run, then becomes a fluid and fiery pass-rusher when he’s allowed to get after the quarterback. In many ways, his game is similar to Christian Barmore’s. There could be some redundancy there, but if the plan is to stay in an odd front, they could use Wyatt and Barmore as 3-4 ends on early downs and then move them inside in passing situations. Good luck to opposing offensive lines trying to block Matthew Judon, Barmore, and Wyatt.

Consensus is that Clemson CB Andrew Booth Jr. will be off the board by the 21st pick. But it's not impossible that he falls to 21. If he's there for the #Patriots, this is what a first-round CB looks like.

The Clemson product has the best feet of any cornerback in this year’s draft. Booth’s movements in coverage are quick and explosive, leading to tremendous displays of closing burst and downfield plays on the ball. Best of luck trying to throw a screen to his side of the field because he’s coming downhill in a blur to stop the ball carrier in their tracks. In deeper coverage opportunities, he’s making one-handed interceptions and cleanly sifting through threats in his zone coverage assignments. Although he doesn’t have as much experience in press-man as others, his foot speed and hip transitions lead to some great reps. After the season, Booth had double sports hernia surgery, which held him out of pre-draft workouts, and he wasn’t always consistent with his man technique. But he has shutdown traits on the outside. My pro comparison for Booth is Packers Pro Bowler Jaire Alexander.

Like I said earlier, I'll believe the #Patriots will draft an undersized LB like Nakobe Dean when I see it.

Dean will be an interesting case study for where the Pats are heading on defense. At 229 pounds, Dean was the third player in history to win the Butkus Award for the nation’s top linebacker in both college and high school. He looks like Neo in the Matrix while navigating blocks and dodging bigger bodies. Dean might not forcefully take on a blocker, but his play speed and agility allow him to stay clean to make plays on the ball. In coverage, Dean gives the defense another box safety. He can carry inside pass-catchers vertically, match shiftier players on horizontal cuts, and play both from a linebacker alignment and over the slot. There are also intriguing reps as an interior blitzer and QB spy. Dean’s body type is a complete departure from Belichick’s typical mold, but as we saw last season, that might be necessary, and Dean has the chase-down speed to keep up with new-age offenses.

(#11 rushing on the right tackle above)

Draft media is starting to catch up with the league on one of the draft’s most underrated prospects. Johnson has everything coaches want and need as an edge defender. He has great length, flexibility/bend, and upper-body power to set the edge or collapse the pocket. Plus, speed off the ball, hand technique, and processing to win upfield as a pass rusher or run defender. And his motor always runs hot. He also had great tape against top offensive line prospects Ikem Ewkonu and Zion Johnson. As the most advanced run defender in the draft and an underrated pass-rusher, Johnson is a perfect fit if he makes it to the Pats in the first round. However, it’s unlikely that he’ll be on the board at 21.

Lloyd is a potential impact player in multiple roles. pic.twitter.com/Y5HfYeZaVI

At first glance, certain areas of Lloyd’s game make his fit with the Patriots questionable. For example, he doesn’t forcefully take on lead blockers like a classic Belichick-style linebacker. However, there are other areas where Lloyd shines in a Pats-type of way. For example, as a pass rusher, Lloyd pressures opposing quarterbacks from multiple alignments and projects as a featured chess piece similar to Dont’a Hightower in that phase. He is also a downhill missile against the run, can set the edge on the line of scrimmage, has excellent range to make plays outside the box, and receives some Fred Warner comparisons in coverage. Ultimately, Lloyd’s on and off-the-line versatility and added value as a potentially elite pass-rusher make him a slam dunk for New England.

Pairing Jordan Davis with Christian Barmore on the #Patriots D-Line would be a problem for opposing OLs for years to come.

Before testing like an Avenger at the NFL Combine, the consensus was that Davis is a great early-down nose tackle but doesn’t have three-down value. We never bought that. There’s no doubt that Davis’s standout traits are his size, power, and overall functional strength. Offensive lines cannot single-block him unless they’re willing to have a huge dent in the middle of the pocket. The Georgia product can then occupy double-teams with the best of them, while his 4.78-speed at 341 pounds shows itself when he’s working up and down the line to make plays. As a pass rusher, he can use his length and power to bull rush and has adequate quickness to get around blockers. Davis is an every-down playmaker, and much like former Patriots legend Vince Wilfork, having him in the middle makes everyone’s life easier and allows the rest of the defense to fly around.

All in on Chris Olave for the #Patriots if he falls to them at 21. He's the best route-runner in the class. Olave is excellent at selling vertical stems and getting DBs to respect his ability to go deep, then snaps routes off with great precision. No wasted moves, no drifting. pic.twitter.com/13RrnKHqRY

The best way to describe Olave’s game is to channel our inner Michael Jackson: smooth criminal. The Ohio State wideout accelerates off the line with easy vertical speed, has excellent body control and footwork in his route breaks to cut on a dime, and makes everything look effortless. The Buckeyes primarily lined him up outside at the X. But he has plenty of alignment versatility to play inside or out, combining 4.39-speed with technically sound route-running. Although some evaluators have concerns about Olave finishing through contact at the NFL level, we have nothing but hopes and dreams of him in the Patriots offense, where he’s a perfect stylistic fit and has experience with downfield route conversions. Since the big board began in 2019, only Justin Jefferson has made us swoon over a wide receiver more than Olave.

Jameson Williams is exactly what I expected. Rare speed that #Alabama used on verticals, deep overs, slants that turn into big plays, screens/schemed touches. Wrote down on multiple plays, "he just ran by everyone." pic.twitter.com/XVkw1rpbEy

The number one player on the 2022 Patriots Big Board is recovering from a torn ACL in the CFP National Championship Game, but he will be worth the wait. The Pats haven’t had a threat like Williams in their offense in a long, long time. His speed affects defenses at all three levels. He can stretch the field horizontally at the first level and create as a ball carrier, ranking sixth in the nation in yards after catch per reception (9.3). Then, he continues down the field where he can eliminate angles on crossing routes, take slants or curls to the house, and break off vertical stems to create separation underneath. But the best of Williams comes as a downfield deep threat, where he had 13 catches of 20-plus yards last season. He has Tyreek Hill-level speed and burst, runs nasty double-moves that leave defenders helpless, and glides by defenses from multiple alignments. Whether he’s a decoy stretching the field or the targeted receiver, Williams would change the way defenses game plan against the Patriots’ offense for years to come.