Marcus Smart made a valid and needed point after the Celtics' collapse against the Bulls. It's also not the full picture on Boston's early-season disaster. 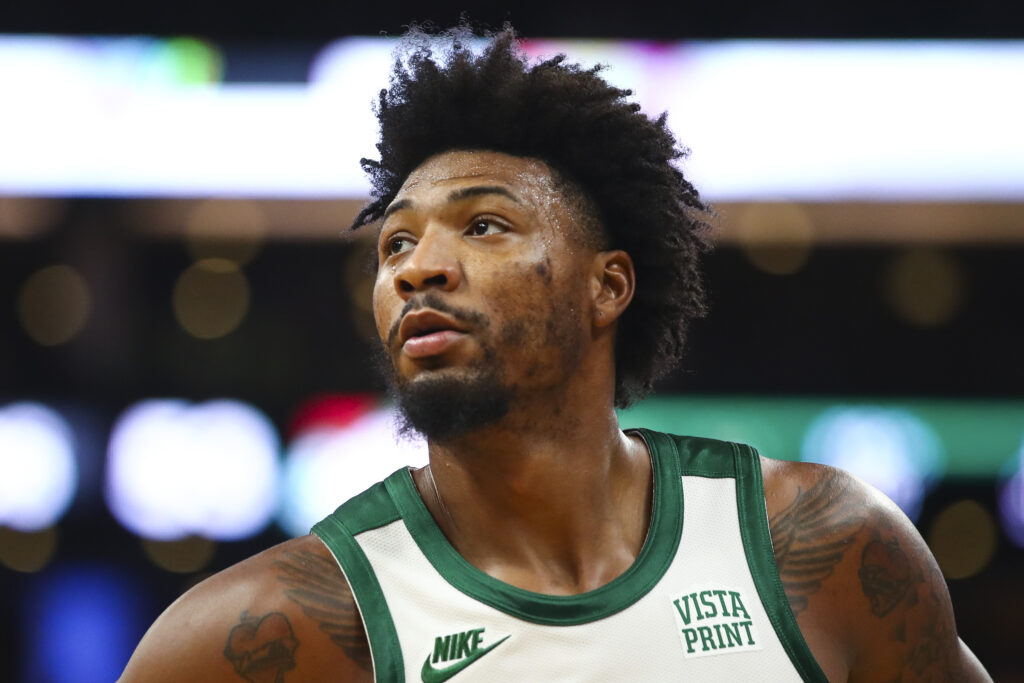 BOSTON, MA - NOVEMBER 01: Marcus Smart #36 of the Boston Celtics looks on during a game against the Chicago Bulls at TD Garden on November 1, 2021 in Boston, Massachusetts. NOTE TO USER: User expressly acknowledges and agrees that, by downloading and or using this photograph, User is consenting to the terms and conditions of the Getty Images License Agreement. (Photo by Adam Glanzman/Getty Images)
Share
Facebook Twitter Email

Marcus Smart spoke candidly, honestly after one of the worst fourth-quarter collapses in NBA history. He didn’t lean on it being early in the season, injuries and lineup inconsistency, or emphasize areas of growth throughout the course of another devastating loss. The moment befitted his critique of Jaylen Brown and Jayson Tatum.

On a team that’s had few answers for its baffling 2-5 start, he offered one. Take the burden off the Jays.

The explanation amounted to a cropped picture, one that transcends beyond this game. It’s hard to disagree with Smart’s premise, that teams know Brown and Tatum will be coming, and they need to become better creators. That could even be the biggest issue, but there are many. Ones that make things more difficult for Brown and Tatum. Boston, for example, rarely reaches the basket, an issue Smart’s involved in.

A film study on Monday’s collapse didn’t show Tatum falling into an overwhelming, ball-stopping fury in the fourth quarter, or making as many questionable decisions as he did on Saturday. He quickly transferred the ball out of doubles, and even a triple-team and the Celtics missed open shots. Tatum also occassionally fell in love with the jumper with a sizable lead and attacked head-on when the game got tight, as Smart saw.

“I would just like to play basketball,” Smart said. “Every team knows we’re trying to go to Jayson and Jaylen. Every team is programmed and studied to stop Jayson and Jaylen. I think everybody’s scouting report is to make those guys pass the ball. They don’t want to pass the ball. That’s something that they’re going to learn. They’re still learning. We’re proud of the progress they’re making, but they’re going to have to make another step and find ways to not only create for themselves but create for others on this team to open up the court for them later down in the game where they’re always going to have to take those tough shots or take tough matchups when they do get the 1-on-1 or they bring the trap. It’s something we’ve been asking them to do and they’re learning. We just gotta continue to help those guys do that.”

The Celtics lack shooting personnel and their 33.7 3PT% falls in line with the career average of the roster. The defense continues to struggle to adapt to Ime Udoka’s switching system and leaned on zone looks in the fourth. The team’s less experienced players still can’t break the rotation and Robert Williams III can’t seem to generate the same vertical spacing he did last season. They’re asking 35-year-old Al Horford to do a little bit of everything, lacking a third consistent wing. These Celtics, off to their worst seven-game start since 2006-07, might just not be that good.

Boston’s 19-point lead dwindled early in the third quarter when Williams III failed to separate on his rolls on consecutive pick-and-roll plays. Alex Caruso went at Dennis Schröder on offense, while Tatum had no reliable shooters, flanked by Josh Richardson, Romeo Langford, Schröder and Williams III. It made Tatum an easier double target, and Langford failed to move the ball when Chicago scrambled back to his drive. Would Richardson for three above a high screen have been better? He hasn’t shot too poorly, at 36.8% on 19 attempts.

Tatum’s attention to the defensive end seems to wane through Boston’s offensive spirals, worsening the runs against the Celtics. He strayed too far into the lane on Chicago’s fast break following Langford’s miss, and lost a trailing Zach LaVine, who hit a three to get the Bulls within 11 points.

Udoka responded nicely, running a flare screen for Tatum to get downhill off the ball. Tatum got blocked by Tony Bradley, but Richardson recovered the ball and Tatum went to the post, leading Schröder free to the rim on a handoff to find Horford for three. Boston escaped trouble in the third with a 14-point lead, Udoka switching to a drop defense with Richardson and Horford getting a stop outside and inside.

Then Udoka filled the perimeter with Richardson, Schröder and Grant Williams to begin the fourth and the meltdown followed. Tatum attacked head-on in isolation into crowds at the basket. He drew three defenders (pictured above) and hit Grant with a skip pass, who found Schröder, who air-balled an open three. The Celtics stayed connected on defense for the moment, Grant drawing a charge in rotation, but the offense couldn’t reestablish a double-digit lead.

Tatum settled for a long jumper over Caruso and lost him in transition as he hit a three. Schröder got swallowed up on back-to-back drives in the lane. His teammates, including Tatum, stood still off-ball with Williams III unable to break free from Bradley. Worse, the Celtics, who didn’t haul in a single defensive rebound in the fourth, moved to a zone look and allowed a second-chance LaVine finish to get Chicago within two points.

Smart sat on the bench for that stretch and returned with a tough driving layup from outside the lane. He was right about landing largely off-ball for the rest of the game otherwise, setting a flare screen to free Tatum on another downhill drive off the catch with Boston now trailing.

Horford followed Tatum’s miss inside with a put-back dunk to go ahead one, but Tatum had just complained in transition over what he thought was a kicked ball on his previous passing turnover as the Celtics gave up the lead in transition. Udoka’s statements against getting caught up with the referees remain unheard.

Spacing continued to plague the offense. Horford got stripped by a collapsing defense on a post-up, then he couldn’t finish an open pick-and-pop three Tatum generated for him down by two. Brown, as he has in the past, disappeared from the flow of the offense and didn’t attempt a shot until 3:17 remained after lifting the Celtics ahead through the middle portion of the game. Smart’s critique falls flat on him. Brown could use the ball more.

Smart also commented on the pressure Brown and Tatum receiving translating into defensive fatigue. A foul parade ensued that allowed the Bulls to extend a late lead, along with another second-chance score following a Chicago offensive rebound. Tatum threw a soft pass to Horford on his cut that got broken up, then we got our visual: Smart and others standing in the corner, Tatum attacking head-on and losing control.

“Everybody knows I’m a great passer and imma find guys,” Smart said. “Just really taking some ease off of Jaylen and Jayson early on and even late in a game sometimes, where they’re not exhausting themselves on the offensive end, and then they’re getting picked on on the defensive end.”

Udoka thought the Celtics relaxed, different from an effort issue, but a close relative. Between the personnel, lack of off-ball ball movement and propensity to fall into isolation it’s understandable why some want to see more Payton Pritchard and Aaron Nesmith, despite their slow starts. The mixes of Richardson, Schröder and both Williamses playing off Tatum crowds the paint and takes away post mismatches Udoka hoped to attack this season. Using Brown and Tatum as spacers away from Smart would be counterintuitive.

Smart recommended uses for himself, including those post-ups, where he historically finds success. Moving closer to the basket falls on him amid a brutal three-point shooting start, as he and Brown need to work on commanding the ball more and increasing their own playmaking output. Smart thrives as a secondary ball-mover, but hasn’t gotten many set-running opportunities, especially as Schröder emerges.

Tatum, as he did for moments on Monday, should be comfortable moving off the ball to free himself even if it requires some battling against physical defense. This roster is flawed, so it’s going to require some grittiness to scrap out victories, instead of sulking when shots down fall.

“We felt like we had our best offensive playmakers out there,” Udoka said. “And turned it over a few times, weren’t strong on the pocket on the pocket pass, and then didn’t make the shots when we kicked them out, or the layups.”