An ESPN article raised questions about where the Celtics are going. There's a path back to contention, but it won't involve shortcuts. 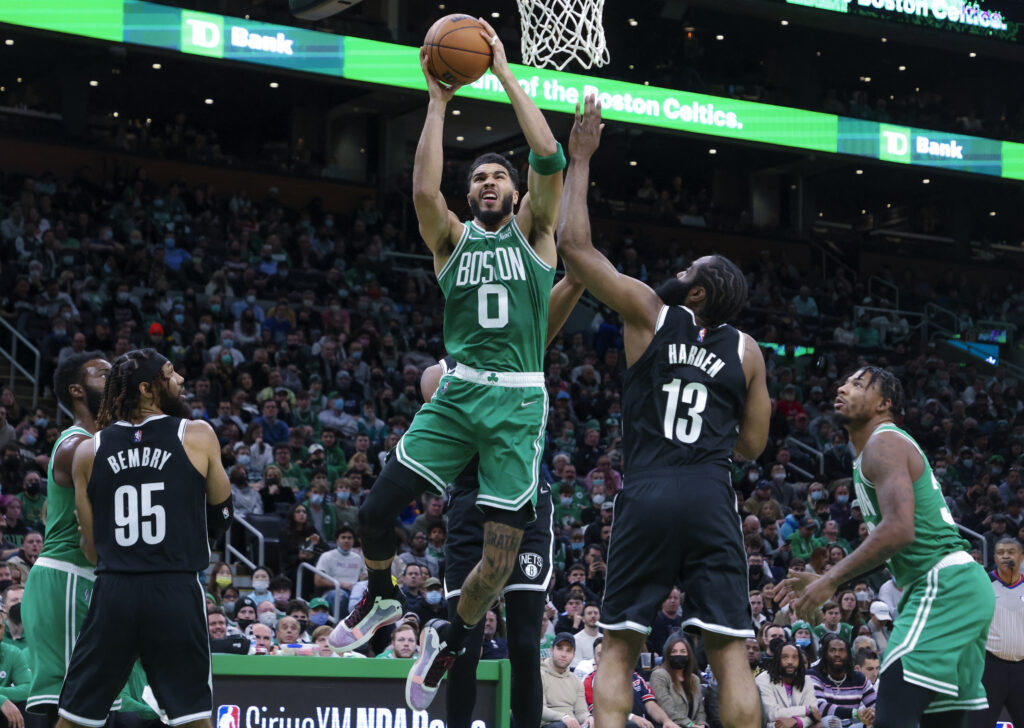 Thanksgiving brings with it the roughly 20-game mark in the NBA schedule. Tom Thibodeau aside, this is seen as the time when teams establish who they are definitively, with shifts that follow largely inconsequential to who’s in the championship picture.

The 2016-17 Miami Heat come to mind, 25-32 at the all-star break, they stormed to 41-41 with one of the great post-all star break runs in league history. It landed them short of the NBA Playoffs.

The Celtics, 10-9, and “stuck in neutral,” per Tim Bontemps’ assessment from speaking around the league, face the same reality. They aren’t NBA Finals contenders. Most of the league sources I spoke with in Las Vegas at NBA Summer League in August echoed that sentiment before Boston played a game: “same as last year.” And here they stand, hovering around .500 (10-9), about to play their 20th game in San Antonio tonight.

Boston has a chance to finish better than last year though, and that matters in what’s about to likely become a slow rise back to contention, if it happens at all. The path back will come from within, and will require patience for a first-year head coach reimplementing winning fundamentals. It’s how Ime Udoka saw Gregg Popovich do it.

“Daily reinforcing of those habits,” Udoka said at Friday’s shootaround. “Film sessions, individual conversations and group film sessions. It’s something that we stress and show every day, how easy it can be, and how difficult we can make it. It’s not going to happen overnight. It’s something we want guys to grow in that area, and we want them to know how different it looks on film and in-person when we do it the right way. It’s quite evident on film when you see it, a tough shot or playing in a crowd, versus getting off the ball and getting someone a wide open shot.”

Dennis Schröder brought a more stable scoring presence at point guard than Kemba Walker did through his knee management. Al Horford helped bolster the Celtics’ defense among the league’s best after that unit floundered for much of last season. The team withstood an eight-game Jaylen Brown absence with a 5-3 record. Between the meltdown against Chicago and Monday’s Celtics win over Houston (11 games), the Celtics posted the best defense in the NBA and third-best net rating (+7.8) behind Golden State and Phoenix.

Opening night in NYC and Boston aside, they’ve defeated who they should’ve, and boast wins over the Heat and Lakers. Brad Stevens’ assessment of Udoka’s 2-5 start looking better than his 8-3 run last year rings true. Will it lead to a title? No. Improvement, nonetheless, opens new possibilities for the team short-term.

Several young players flashed mild improvement through Thanksgiving under Udoka, Romeo Langford and Grant Williams taking part in a 17-0 charge against the Nets on Wednesday. The Celtics lost, trailing by as many as 29 against Brooklyn, one of the standards in the east. That’s where the big picture view of Bontemps’ assessment enters the conversation.

Schröder’s one-year contract and lack of bird rights casts uncertainty over any future he has here, and there’s a case to trade him if his value rises. Horford’s age makes him short-term assistance. The team’s less experienced players show promise as bench players, but not enough upside to move the team’s needle. Payton Pritchard and Aaron Nesmith fell out of the rotation after strong Summer League play.

Worse, offseason moves by the Bulls and Wizards bolstered them above Boston early and have both looking like borderline contenders. It’s hard to fit Boston into the east’s top-six if other teams meet their potential, meaning a finish in line with 2020-21. Even if the Celtics improve, while emphasizing long-term flexibility that likely eyed the the possible availability of Bradley Beal and Zach LaVine, they now watch both players in arguably better positions.

There won’t be shortcuts for the Celtics to return to contention, a Kevin Garnett or Beal-like splash that marked the formation of the last two title-caliber teams. Improvement will need to come from within and Stevens, if he’s fully committed for years to come, needs to pull an Ainge card by accumulating draft picks, young prospects to rise alongside Brown and Tatum, and find veterans to ease their growth.

Bontemps noted much of the important context of where the Celtics stand in his story. Kyrie Irving, Gordon Hayward, Al Horford, Terry Rozier and Marcus Morris all left for little-to-nothing in return. The Kemba Walker signing flopped, an important 2019 draft class didn’t come to fruition, two-way players in Tremont Waters and Tacko Fall stayed for two years and never broke into the NBA.

Evan Fournier, Danny Ainge’s final trade addition as Boston’s GM, left after a handful of game for another trade exception. I’ll add Ainge using more picks than any other league executive between 2016-2020 (19), when the team had real championship aspirations after 2017. One that could help now, Desmond Bane, went to Memphis to undo the Enes Kanter and Vincent Poirier signings, setting up an ill-fitting Tristan Thompson signing.

The Celtics will be hard-pressed to create a better championship-contender core than they had three years ago. Bad luck, sunk costs and Kyrie can be lamented forever. Instead, Stevens should create a different ideology than the title-or-bust mindset that seemed to drive Ainge’s activity. Slow improvement should matter to fans, even if it seems like the team is only moving because they’ve shifted out of neutral without touching the gas pedal. It’s movement.

Boston should continue to kick the tires on players like Jabari Parker, seeing if those with pedigree in the league who failed elsewhere can find footing here. Detroit’s Josh Jackson experiment and Marvin Bagley’s issues in Sacramento come to mind, as does the Ben Simmons situation, if it comes at the right price.

Finding complimentary pieces like Josh Richardson, Horford and Schröder helped this squad, even without dramatic results evident in the record. For Stevens, who’s already appearing on college campuses, flipping some of those players for picks might be the counter to a .500 pace if it continues. Accepting this group won’t contend and forgoing a possible extra seed for the long view could be a difficult, necessary move. Especially if a hot seller’s market emerges. It also reopens minutes to young players, if it comes to that.

Restocking the team’s depth and finding youth with upside matters as much as the matching salaries they now have, if there isn’t value in those deals to entice other teams to make moves. Looking back on the conference improving, it’s at least as likely stars force their way to New York as they do Boston, with the Knicks showing promise, a new culture and a raucous crowd catching player’s attentions like the Celtics did around 2016.

The hardest step is done in Boston though, one the Knicks haven’t achieved. The Celtics have Brown and Tatum. As much as their style generates gripes, they’ve improved as scorers and are young enough to forecast championship-level rises several years from now. They’ve been thrust with massive responsibility, without much help, over the past three seasons. When they had Walker and Hayward to ease that transition, they thrived on the way to the east finals. Now, without perimeter shooters, reliable facilitators or much defensive wing depth they’re taking on both sides of the ball, playmaking and scoring loads. As they’ve acknowledged, they haven’t been perfect.

“I’ve got things I can work on,” Tatum said earlier this month. “I think that’s the good part about it. As young as I am, as good as people think I am, I’ve got a lot to improve on, and I’ll be the first one to say that.”

An assistant coach Bontemps quoted saying Tatum wants to win on his terms, being ok with scoring more and winning, and perhaps not enjoying winning if his scoring doesn’t come first, is hard to take seriously. Brown and Tatum have ample room to grow, need to learn to play together and struggled to instill consistency last season. Udoka talked about offense impacting defense after the loss to Brooklyn and hammered the team’s complaining to officials earlier in the season. All likely allude to Tatum. Going that next step, anonymously, to read Tatum’s mind, commitment to winning, toughness and selflessness from afar goes too far for me.

The piece’s assertions about Brown and Tatum’s playmaking strike a more tangible tone about a core issue with this team. Brown’s long absence makes his inclusion in that dynamic negligible though, as Smart and Schröder have largely taken on that load from him. Tatum has passed less often, hampered by double teams and overloading in the lane. He’s also swung enough drive-and-kicks to generate over eight potential assists per game and gone downhill more often, settling less.

Even if there hasn’t been dramatic improvement, it’s there over multiple seasons and he’s willing to move the ball. Tatum’s early-season scoring slump puzzled the Celtics, but falls in line with others like James Harden, Luka Doncic, Trae Young Damian Lillard and Beal amid rule adjustments toward increased physicality.

The Celtics can take advantage of that trend and give themselves an edge, as Tatum tried to do by digging into the grittier plays like rebounding and rim protection against Brooklyn on Wednesday. Smart utilized it to reemerge as one of the league’s best defenders early this season. That can be this team’s identity on the way to a competitive season that meets expectations.

Nobody saw this group competing for a title, that’s a longer road the Celtics are slowly building habits, development and progress toward. Actualizing it will likely involve a dose of luck.

“Unselfish team play, being selfless on the court, defense and setting the tone. It’s hard to really win at a high level without that,” Udoka said Friday. “It’s no magic formula … teamwork, sharing, trusting your guys and believing in each other. It’s those basic fundamentals that I learned from Pop. We took it back to almost elementary type of drills going into training camp that reinforced habits, and so it’s all those things and I always look at it as unselfish offensively, be great defensively and then you always give yourself a chance.”

What I Loved and Hated from Celtics’ Win vs Pacers