Patriots Have the Talent to Control Passing Game on Both Ends

It's easy to forget the Patriots had a productive season in Mac Jones' first year, and on the outside it looks like the talent is there in the passing game. 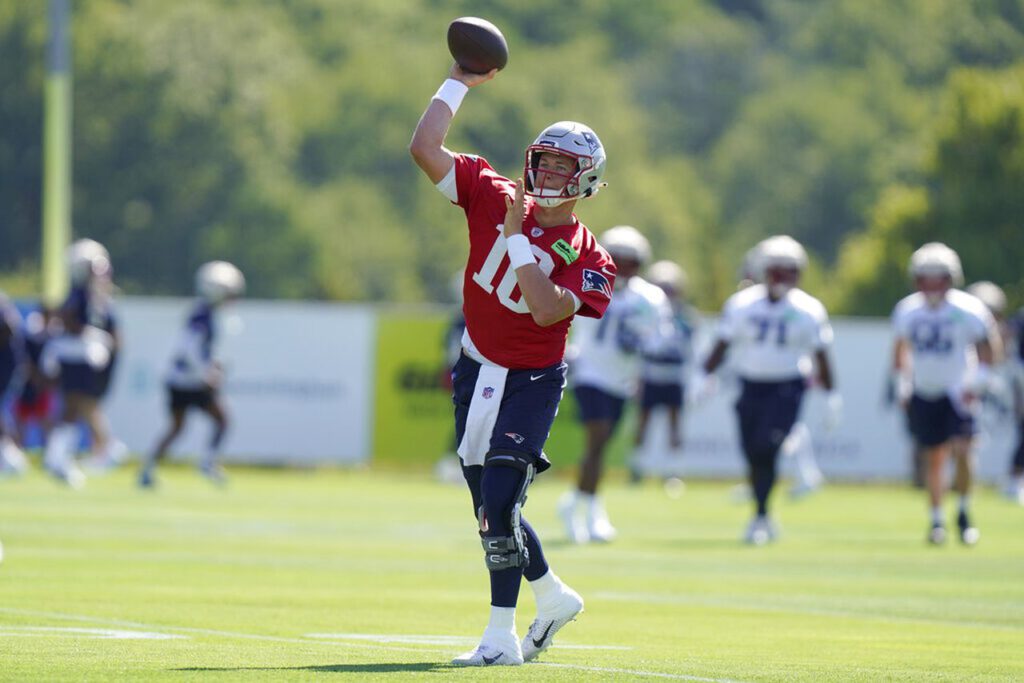 FOXBOROUGH — While cheers broke out at the far end of practice for Marcus Jones punching out a ball from a Panthers receiver’s hands at the last second, Mac Jones stepped into throws on the opposite field and dominated the seven-on-seven drills. Jones flashed the signature Patriots defensive ball-dislodging motion Terrance Mitchell used on Giants receiver Collin Johnson last Friday to force a fumble.

Jones, meanwhile, hit Jonnu Smith for a touchdown crossing through the middle as Carolina’s defensive backs. A fade pass landed in Nelson Agholor’s hands, who finished the play with a spike. Jones twice rushed into the end zone, leaping into David Andrews arms, before getting fired up following his pass to Tyquan Thornton for a score.

The rhythm between Jones and his receivers appears sharp, even with the pass blocking questions, offensive play-calling uncertainty and a slower-than-expected ramp up in camp. The Patriots have weapons, and despite Hunter Henry’s absence and Kristian Wilkerson’s injury after a hit led to a brawl early in practice, Jones continued to successfully work the red zone, hit short-to-intermediate throws finding an array of  targets. With a cast of cornerbacks and safeties starting to make noise on the other side, New England appears positioned to make strides in the passing game that had been a concern entering the season.

“We’ve laid our foundation of what we want to do and what the coaches want to do,” Jones said. “We’ve definitely bought into that. There are things that I’ve done in the past, there are things I like and we’re trying to incorporate them, and there are things coach Belichick sees on the film and he’s like ‘hey, what’d you think about this?’ So it’s very fluid and for them to be able to take some of our thoughts is really important. I think the really good offenses in the NFL, you can tell the play-callers and the quarterback are on the same page, so I think we’re getting there.”

Smith took advantage of added opportunity in Henry’s absence, dominating the one-on-one drills to start practice and drawing one of multiple pass interference calls on Carolina defenders. The tight end flopped in his first Pats season, but the way in which he thrived as a Titan felt tailor-made for the Patriots ground-based and short-range attack. The intricacies Jones and his coaching staff have discussed appear to be getting players who struggled last season more involved.

Smith thrived in the flat in the 11-on-11 work and should get a solid workload on Friday if Henry doesn’t play. New England added to its tight end depth signing Jalen Wydermyer on Thursday and both the receiving core and special teams units may need to brace for more adjustments if Wilkerson’s injury is as bad as it appeared.

Nelson Agholor continued to be one of the pleasant surprises of camp in that group, once wearing a target on his $14.9-million cap hit following an unproductive first season with the Patriots, he hauled in the catch of the day crunched between two defenders in the back right corner of the end zone. Agholor then caught a pair of passes in the two-minute drill work and is the kind of down field receiver Jones can lean on as the Patriots begin emphasizing those throws.

“I love Nelson, he’s obviously very quick, very fast,” Jones said. “He loves football, I’m not sure I’ve seen a receiver who understands football as well as he does in terms of general knowledge. He’s almost like a quarterback out there and all of our guys have worked really hard. We put in a lot of work together in the offseason. He was at all the throwing sessions, but that’s what we’re trying to grow from. It’s like, ‘remember that one time we were throwing and I told you to do this?’ Let’s try it on the next play and we’ve all done that together as a group. He’s definitely done a good job and we’ve just got to keep consistency up with all those guys and like I said, they all bring a different trait to the table.”

DeVante Parker’s presence alongside Smith gave the Patriots their imposing red zone presence in the joint practices, Jones lauding the 50-50 balls. Rhomandre Stevenson snuck in the end zone on an underneath pass in seven-on-seven work, later scoring in 11-on-11 on a toss play. He fills James White’s shoes after a memorable career in what’s become a staple pass-catching backfield role in Belichick’s offense. Ty Montgomery looks like an exciting player in that same mold, able to catch the ball in the flat or on sweeps as the Pats try to create open space. He received the most work on the ground and in the air as the run game took a back seat this week.

Clearly creating a passing rhythm for Jones is a priority, and the line of scrimmage remains the major concern on offense and defense. Jones took sacks repeatedly on Wednesday and continues to struggle to produce while under pressure, Carolina turning up the heat and squashing his two-minute drill at mid-field. Matt Patricia called plays, while several reports indicated Belichick snuck into the two-minute work. Jones mirrored the staff’s talk of a collaborative approach to the offensive coordinator position that Josh McDaniels vacated, the quarterback going through some frustration in the early days of camp.

“I think we’re not trying to come out here and scheme everything up,” Jones said. “A lot of it is just executing our core plays and when we get to that point, we’ll get to that point. Right now, we’re doing everything we can to (say) ‘alright, this is my read, I’m going to throw it to the first read if he’s open.’ If he’s not, I’m going to move on. There’s a lot of scheme in the NFL and sometimes you want to just come out and see how things look too. It’s not always going to be your best play against their best coverage, or whatever it is. The guys are making the plays, which is important.”

On the defensive end, Christian McCaffrey and D’Onta Foreman tore up the Patriots’ run defense unit, both barreling for touchdowns in 11-on-11 red zone work. The outside defense continued to grow around Jalen Mills though, giving a secondary that’s continuously evolved through the Belichick era a starting point.

Mills embraced the D.J. Moore matchup, speaking like he’s part of the team’s leadership brass after a competitive battle throughout Wednesday, with the cornerback entering his second year in New England starting to emerge as a top defender in camp. Jonathan Jones stepped into some outside work this week as Malcolm Butler fell injured and went to IR. Joejuan Williams joined him on the list, before Marcus Jones made a flashy interception in full field work against Sam Darnold.

“It’s been fun, (Marcus and Jack) are hungry, eager, ready to go. Jack, you can see his football instincts, great feet, you can see what he’s able to do. Marcus is my guy, sits by me in meetings, I’m cracking on him all day, but I think he wants to learn so much. He’s playing a little bit of everywhere in our defense, inside, some safety type stuff. I love how they come in, want to learn, want to get better.”

The Patriots and Panthers meet in the final home preseason game for New England at 7 p.m. tomorrow. Carolina will play its backup units, with head coach Matt Rhule expecting to see Patriots starters after Bill Belichick rested them against the Giants last week.