The Browns are in Foxboro for a 1pm kickoff between two playoff hopefuls. 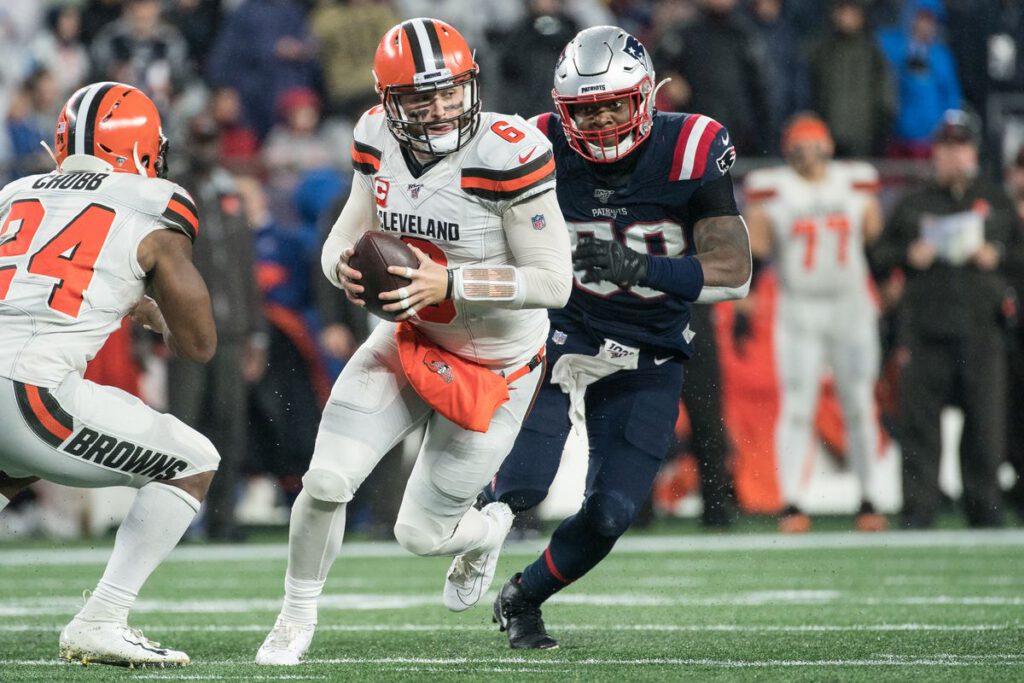 The Patriots continue to string wins together as they made it three in a row this weekend in Carolina. Despite the New England offense being relatively “meh” over the last several weeks, the defense is firing on all cylinders and Bill Belichick’s hands are all over it. He currently has (+1400) odds to win Coach of the Year, and I think he deserves a real shot at it.

Bill Belichick hasn’t been named Coach of the Year since 2010, but he might have a chance at it this year according to @betonline_ag. @mikekadlick tells you why the #Patriots coach might be the smart bet halfway through the season 💰

The Browns are in town this weekend for a pivotal matchup between two playoff hopefuls. The game kicks off at 1pm with Ian Eagle and Charles Davis on the call for CBS.

Here are the betting lines for Sunday’s game, courtesy of our exclusive wagering partner – BetOnline.ag:

Ex-Browns wide receiver Odell Beckham Jr. was the talk of the league this week as he was cut by Cleveland last Friday. Prior to signing with the Los Angeles Rams this Thursday, the Patriots were reportedly on Beckham’s short list according to Evan Lazar:

Obviously things can change and there are always teams that fly under the radar but here's the list I'm hearing for Odell (not in order): #Packers, #Patriots, #Saints.

Now that Beckham has found his new home, it’s time for the Patriots to focus on football. Beckham’s sweepstakes took over the week for New England, and they need to focus on Cleveland if they want to get their fourth win in a row.

Baker Mayfield has been a very up and down quarterback over his first several seasons in the league, but he has played exponentially better without Odell Beckham Jr. on the field. Since 2019, here are Mayfield’s stats with and without Beckham (courtesy of CBS Sports):

If New England wants to have a chance on Sunday, they need to get Mayfield off his spot. Check out CLNS Media beat reporter Evan Lazar’s “Keys to Victory” for the Patriots vs. the Browns HERE:

The Patriots once again had a busy week on the injury front, with their top two running backs (Damien Harris and Rhamondre Stevenson) dealing with concussions. WR/PR Gunner Olslewski also suffered a concussion last Sunday. Both running backs did not practice on Friday, potentially leaving New England with just Brandon Bolden and J.J. Taylor for Sunday.

Will take the L on Stevenson. Was told he’d be good to go today. Belichick outlined a pre-practice process to clear players for practice earlier that Stevenson must not have passed. #Patriots could be down to Brandon Bolden and J.J. Taylor at RB on Sunday. https://t.co/i8LKjzqUNi

The Browns also have themselves a slew of injuries. Running back Nick Chubb is currently in COVID-19 protocol, leaving his status in jeopardy for Sunday. Running back Kareem Hunt is still on injured reserve with a calf injury and will miss Sunday’s game.

Linebacker Jeremiah Owusu-Koramoah was designated to return from IR this week, opening his practice window.

I haven’t predicted a Patriots loss in a while (since week four against Tampa Bay to be exact), but I don’t have a good feeling about this one. With the Odell Beckham Jr. free agency taking over the team this week, I think their heads weren’t where they should’ve been this week. I mean, wide receiver Kendrick Bourne even said that everyone in the locker room was, “talking about Odell.”

Belichick will continue to dial up the defense; but with the success Baker Mayfield has when he doesn’t play with OBJ, mixed with Mac Jones continuing to plateau – I think the Browns will squeak one out in Foxboro.