Jaylen Brown and Jayson Tatum continue to try to play together amid the noise that they need to be broken up. 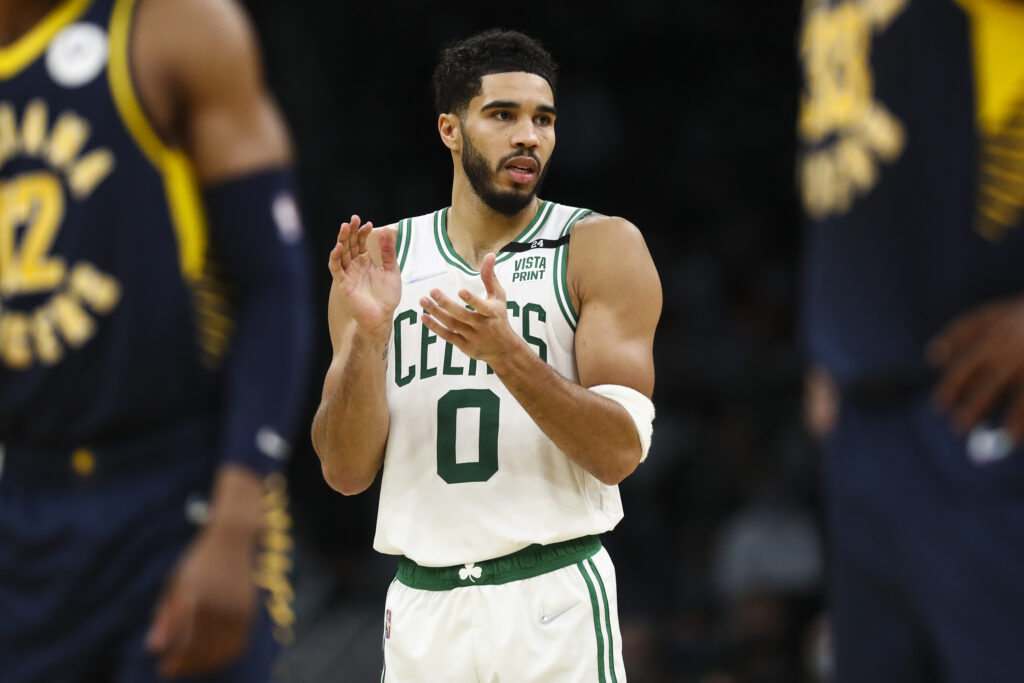 BOSTON, MA - JANUARY 10: Jayson Tatum #0 of the Boston Celtics reacts during a game against the Indiana Pacers at TD Garden on January 10, 2022 in Boston, Massachusetts. NOTE TO USER: User expressly acknowledges and agrees that, by downloading and or using this photograph, User is consenting to the terms and conditions of the Getty Images License Agreement. (Photo by Adam Glanzman/Getty Images)
Share
Facebook Twitter Email

Jayson Tatum started the Celtics’ 119-100 win over the Pacers with a three. Jaylen Brown drained the next. Tatum hit a pair back-to-back. Brown again. Two free throws and six minutes later, Boston had a 10-point lead that Indiana would only cut down to five by the end of the night. Six minutes later, a new milestone for the pair.

Brown and Tatum shared 11-for-19 shooting lines and each met at the 30-point mark by the end of the night. Their 24 combined first-quarter points were their most ever in an opening frame, according to NBC Sports Boston, while their 67 total stood as their highest combined mark since the Celtics’ October overtime win in Charlotte (71) and their third-highest combined total ever. Brown and Tatum are learning to play with each other amid the noise, and coexisting in the first might’ve been their most significant step yet.

“We’ve added to the package of utilizing those two in similar actions,” Ime Udoka said on the pair’s growing two-man game. “They may guard two or three guys one way, but when you put them in the action it causes some hesitation and confusion at times … it’s different for every game and how teams guard, but when you have certain guys in the action, they’ll blitz or try to take it away from one, but when we involve both it’s tough on teams. It causes some hesitation … there are several options out of it. The initial handler can obviously attack, move it to the second side and then you have throwback … we like how they were running it, recognizing the advantages in it, whether we flip the handler, flip the screener.”

Wednesday brought more of those plays on the way to Boston’s third straight win. Tatum ducking into the lane to catch a pass from Brown against a mismatch closer to the hoop. Brown setting a hard screen to free Tatum driving downhill.

Both players spaced the floor for each other along the strong side in the win, giving each other an available outlet. They passed to each other 14 times for a pair of assists. They’ve nearly doubled how often they find each other since Udoka emphasized the need for them to learn to play together shortly before December began.

That’s become Udoka’s mission in year one. At times, he’ll call plays, but wants the progressions to start occurring naturally. Sometimes they’re awkward, simple or lead nowhere. Both Brown and Tatum are buying into the process’ importance though. They spoke about it more openly this week, had a conversation about the growing talk about them needing to be broken up and both affirmed they want to make it happen — in Boston.

“There’s not many players in the league like JB,” Tatum said. “The grass ain’t always greener and we’ve had some great stretches and I think this year hasn’t been what we expected, but I think in the long run it will be good for us.”

Brown posted his first triple-double on Saturday before a six-assist, zero-turnover masterpiece on the ball through an overtime win against Indiana. He made decisive passes late to Robert Williams III and Grant Williams. Tatum thrived as an initial penetrator, despite eight turnovers and a sluggish 7-for-21 shooting effort.

At times, the star seemed frustrated and sat on the exercise bike alone in his limited minutes alone on the bench. When he returned, he keyed moments like his game-tying side step shot over Myles Turner to force OT. Tatum had clapped back at Kendrick Perkins over mentioning his 6-for-14 night alongside Brown’s career night on Saturday, explaining his decision to do so last night as finding it unnecessary to put himself down while Perkins complimented another player. Still, Tatum’s intentional passing, rebounding, penetrating and screening all embodied a player intent on learning how to win alongside his counterpart. They’ve echoed Udoka’s sentiments.

“If I’m handling the ball, especially against a team like Indiana where they hedge and where the big is always at the touch, if I kick it across and you got somebody like JB playing downhill and the defender backing up, that’s to his advantage and that’s extremely hard to guard … I think it makes a lot of sense,” Tatum said. “If I’m only running the ball screen on one side and they blitz, I kick it out to the big, change sides and then you got JB over there. Something good will happen. So we’ve gotta keep doing that and just keep reading the game.”

Three straight turnovers between Brown, Tatum and Dennis Schröder during a dreadful second quarter still prevented the night from being a wall-to-wall effort. Boston occasionally scrambles into one-on-one play and loses control of its offense when runs go against them.

It’s something to watch going into games against far more difficult defenses in Philadelphia and Chicago this weekend. Their fourth quarter stats remain dreadful, their isolation frequency ranks third in the NBA and their 14.2% turnover rate (17th) lags behind the league average after a string of sloppy games. Their offensive rating sits at 108.6 (22nd), rarely moving all year.

The turnovers come as a consequence of aggression and pace lately, something even Schröder bought into during his 7-for-11, 23 point showing on Wednesday. If he played more late, the win might’ve marked the first trio of Celtics teammates to score 30 in team history. The progress this group makes game-by-game provides hope, even visually, Brown and Tatum talking through a timeout, Tatum joining the bench late and their admission as a pair that they have work to do.

Before, they’d acknowledge each other, as Al Horford told CLNS earlier this season, they’d speak about their own need to improve and flash outstanding performances, sometimes on the same night. Now, they’re diving deep with the coaching staff through individual film sessions about how they can use each other to make the game easier. How defenses guards them. Where the available passes lie. It’ll provide a platform for the future, and the now, even with inconsistent contributions around them.

Boston ranks 10th in scoring differential after last night. Their defense: fifth in the NBA. They’ve moved up to 12th in net rating through their win streak. The Celtics outscore opponents by 5.9 points per 100 possessions when Brown and Tatum take the floor together, and with Williams III they’re +14.6.

That’s compared to +2.8 and +0.8 in those looks last season. This group is better, thanks to the efforts of its best players. How much? That’ll be determined by their ability to execute the offense in turbulent situations, without Udoka needing to call a timeout, breaking up the flow and drawing up a play, as he said in New York last week.

“No satisfaction whatsoever. Just got back to .500, got some tough games coming up in front of us,” Brown said. “We’re playing some good ball right now. We’ve got to keep it up.