Bengals rookie Ja'Marr Chase made a HUGE leap after a record-breaking performance on Sunday. 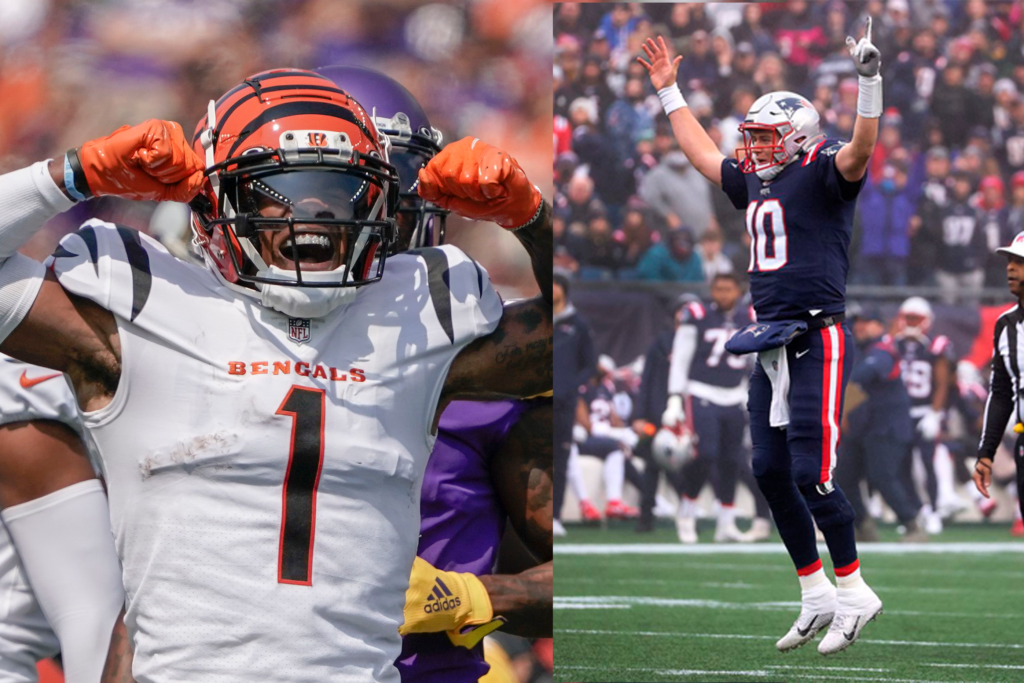 After a WILD weekend in the NFL that included playoff spots being clinched, records being broken, and undershirts being thrown into the stands, it’s crazy to think that we still have another week of football left.

What’s also hard to believe is how fast the odds have flipped to win Offensive Rookie of the Year. Just last week, I wrote about if Mac Jones had earned the award despite the poor run he had been on. From the looks of it – he had. He was the clear betting favorite to win it according to BetOnline.ag. These were BetOnline’s odds just a week ago:

However – after a historic, record-breaking performance from Cincinnati Bengals wide receiver Ja’Marr Chase, here are the current odds to win the award:

Ja’Marr Chase was absolutely dominant in Cincinnati’s 34-31 win over the one-seed Kansas City Chiefs. He caught 11 catches on 12 targets, broke the Bengals record for most yards in a game with 266, and hauled in three touchdowns.

Chase also broke the record for the most receiving yards in a rookie season on Sunday, passing his former college teammate Justin Jefferson. Chase’s 1,429 yards so far this season are the most by a rookie in the Super Bowl era.

His touchdown catches of 18, 69, and 72 yards played a major role in clinching the AFC North title for the Bengals. Cincy has their sights set on bigger and better though, as Chase alluded to after the game:

Ja'Marr Chase knows #Bengals might get a second chance at KC. So Patrick Mahomes. #RuleTheJungle pic.twitter.com/k5IGlXJ0IV

Patriots quarterback Mac Jones had himself a day on Sunday as well. The rookie threw for three touchdowns (two to Kristian Wilkerson) – and put up a career-high 94.5 QBR in New England’s rout of the Jaguars.

More importantly, New England clinched themselves a playoff birth on Sunday, ending their post-Tom Brady era drought at just one season. Jones is the first rookie to start every game and lead his team to the playoffs since Dak Prescott took the Cowboys to the dance in 2016-17.

Much like the Bengals, the Patriots are not satisfied. When asked about earning a playoff birth, Jones said, “I realize what we’re playing for… it’s been a great privilege to play here so far and we’ve got a lot more work to do.”

Last week, I chose Jaylen Waddle as my pick to win Offensive Rookie of the Year. This was my rationale:

My first question is: where the heck is Jaylen Waddle on this list? The 2021 sixth overall pick has paced the Dolphins offense all season long, and is well on track to break Anquan Boldin’s receptions record for a rookie (101). He is Miami’s best player on offense at just 23 years old, and – along with his college teammate Tua Tagovailoa – is a major reason why they have won seven straight games. Through week 16, Waddle has 96 catches for 941 yards and 5 touchdowns.

Of course – as soon as I put this out, Miami threw up a dud against Tennessee. They scored just three points, Waddle only had three catches for 47 yards, and the Dolphins were eliminated from playoff contention. So much for that hot take…

So now – just a week later, it’s looking like Chase is going to run away with this award. I wouldn’t count your chickens before they hatch though. Let’s see how week 18 plays out and see if Mac Jones can close the gap once more.