The Celtics will need to quickly pivot to prioritize Jaylen Brown and come together for a hot start after the Kevin Durant trade demand ended on Tuesday. 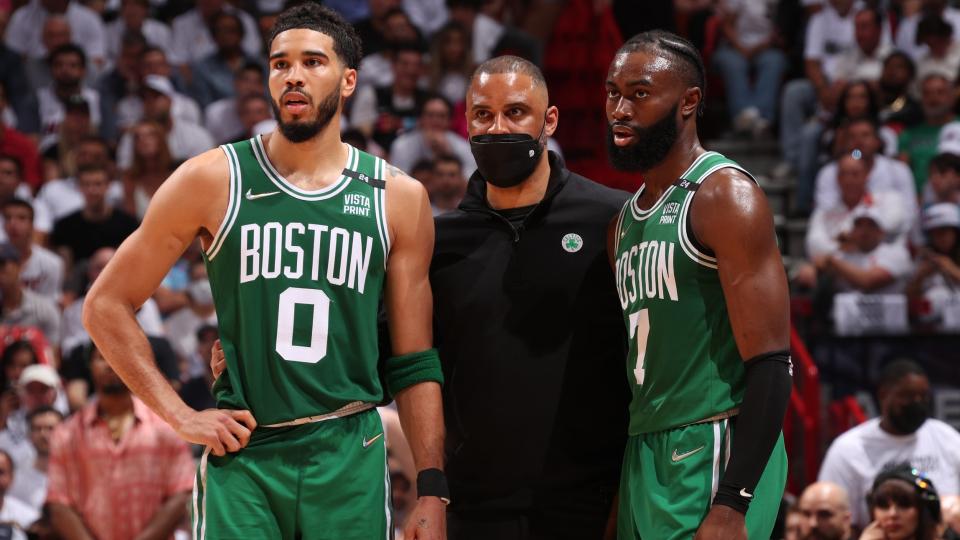 The Brooklyn Nets agreed to run it back on Monday, ending Kevin Durant’s two-month old trade demand just short of training camp. Steve Nash, Sean Marks, Joe Tsai and Durant’s representation reunited in Los Angeles, marking a successful end to the standoff for the Nets. They defended their organizational prerogatives this offseason and braced low-ball offers from suitors. Now, they’ll need to mend any remaining rifts to make this a more permanent resolution.

The Celtics will be forced to regroup too, following over one month of reports connecting them to Durant, including a July article in The Athletic that indicated they offered Jaylen Brown. The Boston Globe reported last week that talks never reached a serious point, a constant message from Boston during the proceedings, with the team ramping up its pro-Brown social media promotion with a ticket advertisement including him late last week.

“I’m not going to go into any conversations that we had, because I don’t think that’s appropriate, but my job is to know what costs are and then ultimately determine whether or not we want to be involved in any deal with any team around the league,” Brad Stevens told WEEI on Tuesday.

Adam Himmelsbach noted Boston kept Brown in the loop, but interviews with Jayson Tatum and Grant Williams stopped short of full endorsements to keep him. Both players toed the line between saying they love the team as it is without stepping on any potential negotiations the front office was undergoing. Nobody stepped up to say they unequivocally wanted to keep Brown around. It’s worth wondering how that will be received from Brown, especially given that Tatum worked out with Durant amid the rumors.

Tatum’s Durant backing continued last week when he appeared on Taylor Rooks’ Bleacher Report series. Tatum defended his decision to work out with the star, and questioned why it would be a concern.

“I’ve known KD since I was in high school,” he said. “We were on the USA team together, we spent five weeks together last year from Vegas to Tokyo, we won a gold medal. We have a bond. Like, that’s my brother. And it’s like, I’m not too proud to say KD’s one of the best players ever, so it’s like one of the best players wants to work out with you and I could learn some things from him. Why would I say no?”

While Tatum shook off concerns over the rumor, Williams was worried enough to reach out to Brown during the star’s European travels. Brown had already tweeted SMH when the report of him being offered came out. Williams, who said he didn’t know what was going on behind the scenes, compared the saga to Al Jefferson being offered for Kevin Garnett, posed that it should be seen as a sign of respect and supposed it may or may not happen. If it doesn’t, he continued, Williams expects Brown to use it as motivation.

Williams’ sentiment stood true. The NBA is a business and almost any player should expect to be in trade rumors at some point. What he didn’t do was pacify the noise or support Brown’s standing in Boston. Maybe Williams didn’t see that as his role. Tatum should have, because if he isn’t speaking for the team, who is?

It couldn’t have thrilled Ime Udoka or Stevens to see Tatum and Durant pictured together at the height of the rumors, particularly if the notion that the Nets utilized the Celtics to raise Durant’s price in negotiations was true. Tatum professed all of last year that he’ll lead in his own style, without outside influence. He saw the workout as a chance to get better. It was undoubtedly bad timing.

The Celtics will need to put the Durant saga behind them and gear up for the strong start they’ve prioritized. They’ll open the season against the 76ers, Heat, Magic, Bulls, Cavaliers and Wizards in October in the 2022-23 schedule, released last week, with chemistry a bigger question than on-court concerns.

For Brooklyn, they’ll inevitably rejoin the playoff field in the east if Kyrie Irving, Ben Simmons and Durant play out the season together (the Celtics visit Brooklyn on Dec. 4). They could even become a contender. The Nets reshaped their roster by adding wings Royce O’Neale and T.J. Warren, but have more than enough issues to move past themselves in the wake of Durant’s rescinded trade demand, both on and off the floor.

Durant’s apparent dissatisfaction with the Nets not committing long-term to Irving doesn’t seem likely to change, leaving his co-star and inevitably Durant’s futures in flux. Simmons hasn’t played basketball since the second round of the 2021 NBA Playoffs, and it’s unclear when he’ll return from offseason back surgery and the mental hurdles the team detailed this spring.

Joe Harris and Seth Curry give Brooklyn some fun lineup combinations as they return from injuries. The same concerns Durant shared regarding Nash’s coaching style still exist though. The team never formed a defensive identity last year, got hammered while switching against the Celtics and now its stars will need to prove consistently available, finding ways to gel and not gaze elsewhere if they start slow. Durant’s demand to fire Nash and Marks set a bad tone.

Brooklyn opens against New Orleans, Toronto, Memphis, Milwaukee, Dallas and a two-game Pacers series. They can add to the roster now that it’s set around Durant. The challenge is finding free agents that aren’t old and declining. Blake Griffin or LaMarcus Aldridge could return to add some interior depth. Neither factored into the postseason run. The team lost Goran Dragic and Bruce Brown after productive first-round series against Boston. Patty Mills returns following a solid shooting year.

The questions remain: is their back court too small? Will Simmons play some five and guard big men? Can Nic Claxton take more steps after a series where he struggled at a historic level at the free throw line? Who can play together effectively on this roster? Will Nash trust young players like Cam Thomas and Day’Ron Sharpe?

The talent is there and the Nets rocketed up oddsmaker favorite boards, including Betonline.ag’s (from 14/1 to 15/2 in title odds, T-4th), after Tuesday’s announcement. The Celtics remained favorites. It’s unclear how much several ancillary additions for Brooklyn and Simmons would change a Celtics-Nets matchup that Boston took in a sweep last year. Change could come from the most important players all having something to prove, perhaps the biggest success for Nets leadership even if that motivation is aimed at their lack of commitment.

Harris and Simmons missed the Boston series, which is a big deal. Otherwise, the Celtics’ bruising, versatile defense and athleticism overwhelmed Durant and Irving. The Nets looked old, slow and unable to stay in front of Brown and Tatum. Simmons alone can’t solve their systemic and personnel problems on that end. Will he even return the same player physically?

There are chemistry questions for the Celtics too, and potentially some lineup, health and the ball-handling concerns to address. Is Al Horford, Robert Williams III, Danilo Gallinari, Grant Williams and Luke Kornet a deep enough front court? How will Williams III and Malcolm Brogdon bounce back from an injury-riddled spring? Will pivots toward smaller lineups keep the Celtics as defensively dominant as they were a year ago? Does Brogdon need to start?

Those are all smaller questions than the ones the Nets face, and though Brown’s free agency looms in 2024, Boston’s core is locked in following an NBA Finals run. They’ll return what was the best starting lineup in basketball one year ago.

When training camp starts in one month, internal roles, cohesion and offensive stability will be priorities. The Nets are a distant concern, if they are one at all. The Bucks and Heat should be respected as a the reloaded groups that challenged Boston last year. Cleveland and Chicago could rise as new contenders. Toronto and Philadelphia could regain a foothold in the top of the east’s hierarchy. Brooklyn needs to prove they’re better than the haphazard collective they court last year, and whether they’ll be able to stay together at all for one more.

“We are focusing on basketball,” Marks wrote in Brooklyn’s statement. “With one collective goal in mind: build a lasting franchise to bring a championship to Brooklyn.”