Breaking down if it's smart to bet on the Patriots promising signal caller to take a major step forward in 2022. 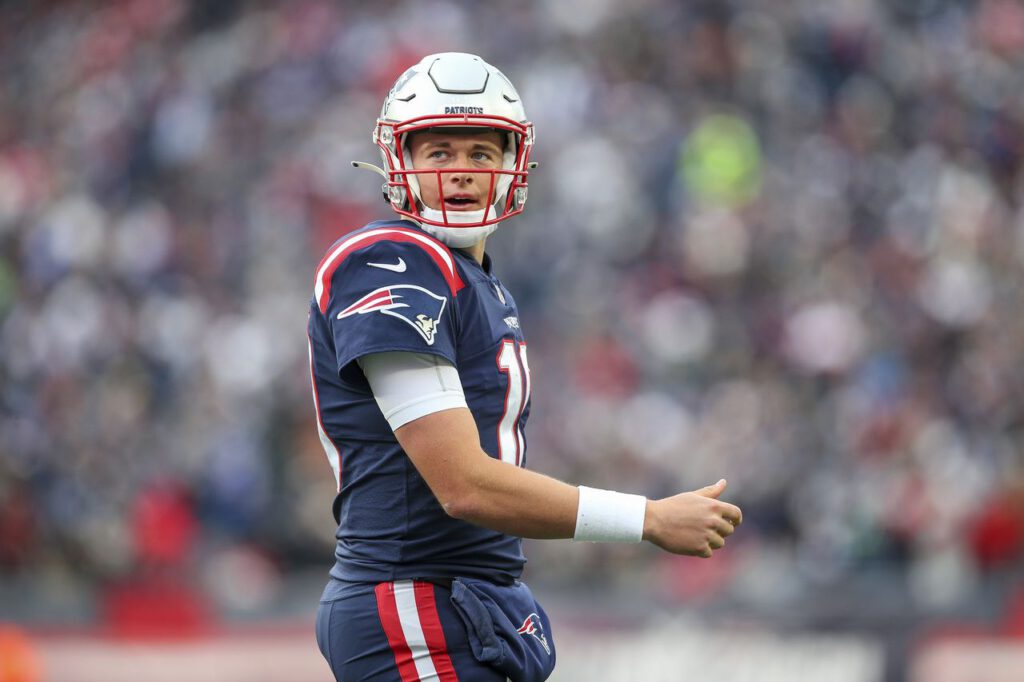 I’m obviously half-joking here, as I haven’t gone away from writing about the NFL at all. Rumor mills are constantly swirling about where superstar quarterbacks Aaron Rodgers and Russell Wilson will play next season, and with BetOnline always pumping out odds for them, I couldn’t help but give out my picks:

READ: Where Will Russell Wilson Play in 2022?

We’re also a little over a month away from the Patriots devastating loss to the Bills up in Buffalo on January 15th. Hopefully, now that the dust has settled, we can get back to being excited about what New England has in their future – starting at the quarterback position.

Mac Jones finished second in the NFL’s Rookie of the Year voting behind only Ja’Marr Chase, and was clearly the most promising quarterback in his draft class. He threw for 3,801 yards and 22 touchdowns – and had a passer rating of 92.5 in 2021.

Now with all this being said, it would certainly be a tall task for Mac to light the league on fire next season. According to BetOnline, he has incredibly long odds to win the league MVP in 2022. He currently sits at 40/1, which is tied for 12th among quarterbacks, and 15th for all players.

Here is a look at the odds:

Our own Evan Lazar broke down the chances of Mac Jones taking a year two leap on our YouTube channel. Check it out HERE:

Now from a betting perspective, would I bet on Mac to win the MVP in 2022? Probably not, but the +4000 odds certainly make it worth a flier. Guys like Russell Wilson, Joe Burrow, Pat Mahomes, and Justin Herbert have all historically taken massive leaps going into their second season, and New England will look for Mac to do the same.

He obviously can’t do this all on his own, and he’ll need a competent support staff to do so – starting at offensive coordinator.

Time is certainly ticking on the Patriots bringing Alabama offensive coordinator Bill O’Brien back to New England, and it’s going to be difficult to see them move forward with a staff of Joe Judge, Nick Caley, and Troy Brown. Hopefully Billy OB is just a phone call away.

The Patriots offensive would also benefit from bringing a top-tier pass-catcher into the fold. It would give Jones the security blanket that all of the other top quarterbacks in the league have – and would allow players like Hunter Henry, Kendrick Bourne, and Jakobi Meyers to play a secondary role in the offense – a role that they would certainly have success in.

Mac Jones isn’t the problem in New England. If Bill Belichick – the greatest head coach of all time – can get his proverbial crap together and support his young quarterback with a pulse at receiver and a brain at offensive coordinator, I don’t see why he can’t contend for an MVP in 2022.