The Patriots visit the Bills on Monday night for what could be the de facto AFC East Championship Game. 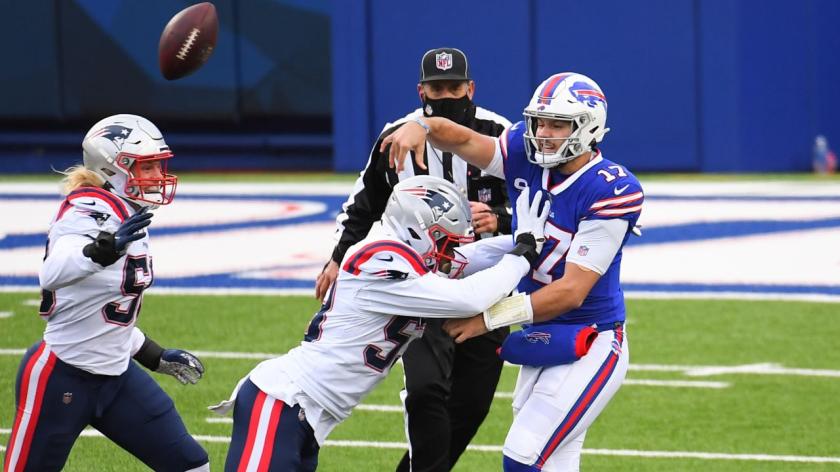 The Patriots came away with yet another statement this weekend after beating the lifeless Titans 36-13. New England is now the third seed in the AFC, and leads the East division by a half game over the Buffalo Bills.

Buffalo also got through the weekend with a win, dominating the Saints 31-6 on Thanksgiving night. After getting demolished the week prior by Jonathan Taylor and the Colts, the Bills needed to get back on track – and they did just that on Turkey Day to the tune of 260 yards passing and four touchdowns from Josh Allen.

So now, the two trains come together on Monday night. Pats vs. Bills in Buffalo. According to BetOnline.ag, the spread for the game opened at Bills (-3) but has since moved to (-2.5), indicating money coming in on the Patriots.

At this juncture of the season, this game could be considered the de facto AFC East Championship. According to FiveThirtyEight, whoever wins Monday night’s game has at least a 75% chance of running away with the division.

Currently, the Bills are the favorite in the clubhouse with (-125) odds to win the division. The Patriots are just beneath them at (-105). Clearly, this game on Monday is massive for both teams.

If you’ve been reading my betting content over the last several months, you know I’m high on two players, and coach Belichick to take home some accolades at the end of the season. In fact, you may even have some decent value on all three of them if you took my advice…

From October 14th: Four Reasons Why Mac Jones Will Win Rookie of the Year:

The least of the Patriots worries right now is at the quarterback position. Better yet, Jones (+400) already looks like the best player on their offense. New England found their guy of the future, and he will be the 2021 Offensive Rookie of the Year.

From November 10th: Bill Belichick is Making His Way Into the Coach of the Year Conversation:

Naturally, we gravitate towards the young studs that take the reins and galvanize a franchise within their first few seasons on the job (see Kevin Stefanski, Matt Nagy, Sean McVay). It’s difficult for the old guy with the rolled up sweatpants and cut off sleeves to win the award, but if there’s one to do it, it should be Belichick (+1400) – and it should be this season.

This is something I haven’t written about yet this season, but it deserves to be talked about. Matt Judon is a monster – and is starting to get recognized for it. Judon currently has (+2500) odds to be the 2021 Defensive Player of the Year, good for seventh in the NFL…if Judon continues to play this way, the (+2500) may be worth a flier.

Mac Jones now has (-400) odds to win Rookie of the Year, Belichick (+275) to win Coach of the Year, and Judon (+500) to win Defensive Player of the Year. These three should absolutely come out on top with these awards at the end of the season. A statement win in Buffalo on Monday night would certainly help the cause.

Be sure to keep it here on CLNSMedia.com this week for my Week 13 Games to Watch and my Monday Night Football Patriots vs. Bills betting preview, both brought to you by BetOnline.ag!